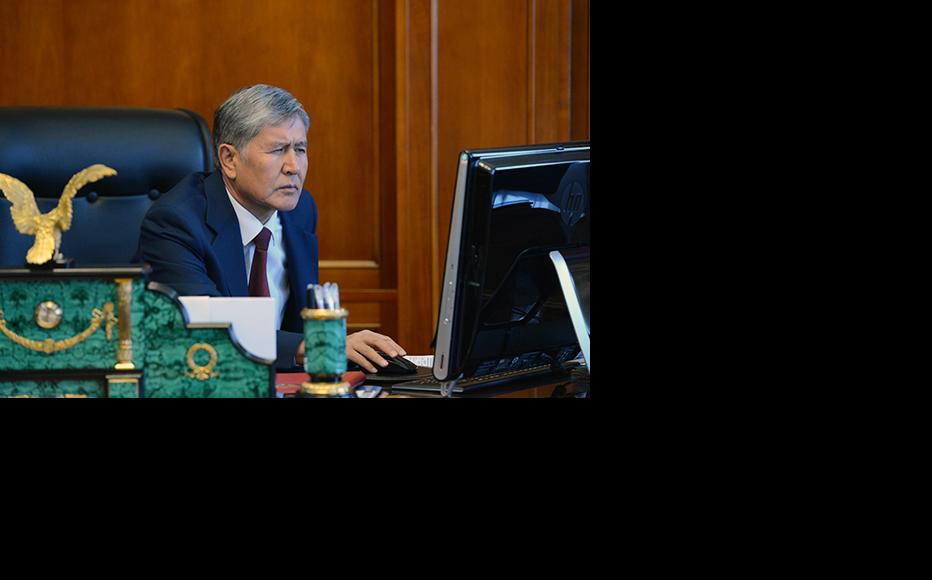 President of Kyrgyzstan, Almazbek Atambayev. (Photo: president.kg)
The link has been copied

Opposition lawmakers and rights activists have called for an investigation after the State National Security Committee (GKNB) admitted investigating several citizens over critical comments they had made about President Almazbek Atambayev on Facebook.

A GKNB list of more than 40 Facebook users considered to be critics of the president was leaked online on January 10.

The names were in a letter from deputy GKNB head Bolot Suyumbaev to legislator Irina Karamushkina, a member of the president’s Social Democratic Party (SDPK), who has called for a crackdown on those criticising Atambaev on social media.

Some of those on the list were very surprised to learn that they had been categorised as political dissidents.

One of those named, Savrinsa Syrgataeva, told IWPR that she had nothing against the president but simply sympathised more with opposition leader Omurbek Tekebaev, head of the Ata Meken party.

“I’ve looked through my timeline and found that I ‘liked’ some posts about Omurbek Tekebaev [and] shared them. Maybe this was the reason, I do not know. I am ready to prove my innocence. If the intelligence agency fails to prove my guilt, then they should apologise for defaming of me,” Syrgataeva said, adding that the GKNB had not contacted her in connection with her online activity.

Another Facebook user, Toichubek Akmatali uulu, currently a student in Turkey, was also alarmed to find himself on the GKNB list.

“I did not write anything about [the president]. I didn’t say anything bad about the head of the Kyrgyz Republic. I do not understand anything. Yes, I shared some news on social media. But I don’t think it is a crime,” he told IWPR.

It also emerged that 11 people had been called in for questioning by the GKNB and only released after giving verbal assurances that they would not insult Atambaev on social media in the future.

After the letter was leaked, opposition legislators called for an enquiry, arguing that the intelligence services should be concentrating on concrete threats to national security.

Aida Salyanova, a legislator from the opposition Ata Meken faction, warned a January 12 session of parliament that the GKNB had overstepped its authority.

“The intelligence agencies found 45 people criticising the president instead of countering new threats,” she said. “All those efforts, funds, and precious time wasted on this purpose.

“If we do not stop this practice, tomorrow we will face persecution of people who ‘like’ posts. And then we will have nothing left of our much-lauded democracy,” Salyanova continued, calling on the Prosecutor General’s Office to investigate both Karamushkina and the GKNB for violating constitutional provisions on freedom of expression.

Kyrgyzstan is considered the most liberal country for freedom of speech in Central Asia.

In the Freedom on the Net report by Freedom House, Kyrgyzstan is ranked 35 out of 65 countries. Neighbouring Kazakhstan is at 63.

Reporters without Borders places Kyrgyzstan 85 out of 180 countries, with its neighbours ranked much lower. Tajikistan is at 150, Kazakhstan at 160 and Uzbekistan near the bottom of the list at 166.

However, in recent years the Kyrygyz authorities have stepped up pressure on journalists and human rights defenders.

Some activists and members of the opposition have complained of surveillance attempts by the intelligence agencies.

Aziza Abdirasulova, the director of the Kylym Shamy Centre for Protection of Human Rights, last year reported being followed and having her conversations with other activists recorded.

In early January, the Bishkek district court set a precedent when it obliged opposition activist Mavlyan Askarbekov to apologise for a critical Facebook post about legislator Dastan Bekeshev from the president’s SDPK party.

Media experts oppose these ighter controls, arguing that citizens should be allowed to express themselves freely and noting that online publications are already subject to legal jurisdiction.

Last autumn, the Prosecutor General’s Office began investigating a poem published on Facebook that contained a satirical reference to Atambaev. The verse could have possibly infringed laws on fomenting inter-regional strife or defaming the honour of the president.

The results of this investigation are still unknown.

In another incident last November, intelligence agencies in the east of the country called in Facebook user Joomart Jamgyrchiev for questioning after he joined an online group critical of the president. As well as searching his phone and house, the GKNB also questioned Jamgyrchiev’s father and brother. The young man was released without charge but told RFE/RL’s Kyrgyz Service that he would no longer made any kind of political statements online.

The Prosecutor General’s Office is yet to give an official comment on this issue.

However, according to the law this body is tasked with protecting the honour and dignity of the president.

Atambaev’s supporters say that this justifies the intelligence agencies in monitoring such online criticism, arguing that the president, along with the country’s flag, is a national symbol. Citizens should be held liable if they insult them.

Karamushkina told IWPR that she was not against reasonable and constructive criticism of the president, within limits.

“The head of Kyrgyzstan and his family are being mocked and cursed,” she said. “We say no one can mock people. Our president is our national symbol. Only constructive criticism should be allowed. All the rest can be deemed to worsen the situation in the country,” Karamushkina said, arguing that action was long overdue.

Karamushkina first raised the issue in parliament in October 2016, when deputy GKNB head Rustam Mamasadykov confirmed that the intelligence agencies regularly monitored negative information about the president on social media.

The Adilet human rights organisation alleged that Karamushkina had asked the intelligence agencies to carry out these operations, meaning that her actions were liable for review by the committee on parliamentary ethics.

She dismissed such suggestions, adding, “Intelligence agencies should have responded to such posts long before [my initiative]. They operate transparently. In this case, there was no covert action.”

Atambaev is known to be touchy about criticism from other politicians and the media.

Late last year, he admitted that he personally intervened to refuse accreditation to Tekebaev’s TV channel Sentyabr for the final annual press conference.

Human rights defender Abdirasulova and another well-known activist Tolekan Ismailova were targeted by Atambaev in a public speech on May 21, 2016 when he called them “NGOers who are loyal to their foreign grants”.

Abdirasulova said that Atambaev set a bad example with his personal attacks.

“We have become used to the fact that the president says whatever he wants,” Abdirasulova told IWPR. “How can the president talk like this? It is clear that he sets the example. For example, who started drawing a distinction: bad or good journalist, bad or good mother? Atambaev did.

“He’s the fourth president under which I am carrying out my human rights activity and defending the rights of citizens,” Abdirasulova concluded. “But I have never felt such an overt persecution and mockery as during Atambaev’s rule.”