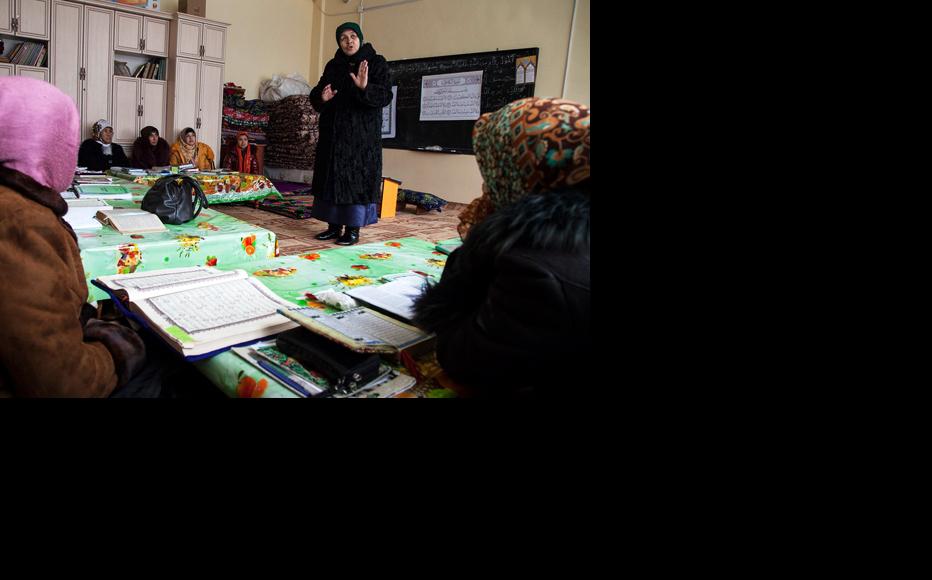 Religious women in Kyrgyzstan are calling for more representation in the country’s Islamic institutions, starting with the Spiritual Administration of the Muslims of Kyrgyzstan (DUMK), the body that sets policy and runs the country’s mosques.

Activists say that the religious establishment has failed to both promote women’s rights in Islam and combat issues such as early marriage and domestic violence.

Mutakalim Zhamal Frontbek kyzy heads Mutakalim, which describes itself as a progressive public association for women. She said that most religious leaders promote the view “that a woman should stay at home, she’s no one, she should not do anything [independent], she should only obey her husband”.

“No one says what rights a woman has, that [in Islam] women and men have equal rights,” she continued. “These questions are being ignored, maybe because these norms are interpreted for men’s convenience.”

Osh-based activist Gulsana Abytova, who supports girls from religious families as part of her work with the Women Peace Bank, said that access to education was another important issue.

Parents often forbade their daughters to continue their education after the ninth grade and stopped them from taking part in various social events both in and out-of-school.

“If communities face the problem of early marriage and restrictions in education, imams should raise these issues in their Friday prayers. Imams fail to respond to these issues,” Abytova said.

Although religious leaders argue that women enjoy a range of social and other protections in Islam, activists say that women in observant families often suffer discrimination and constraint.

Darika Asylbekova, the head of the Osh-based Ak Zhurok NGO, said that religious girls and women who had experienced domestic violence or been thrown out of home regularly contacted her centre.

“These women told us that when they sought help from imams, they advised them on how to maintain the marriage and said they should be patient, as such things could happen in a family, and so on,” Asylbekova said.

Representatives of the DUMK said that religious families did not routinely treat female members more harshly.

Sultanaly Gapurov, of the DUMK’s department for campaigning and women’s affairs, said, “It can happen in specific families that a spiritual person, a person praying namaz [the statutory five daily prayers], beats women. But this should not be considered a social phenomenon.”

Samidin kary Atabaev, head of the muftiate department in Osh oblast, said that “imams do hold activities to prevent domestic violence” but added that he had never heard about any problems in the religious commnity.

“Women have not approached us with complaints about their husbands beating them,” Atabaev continued. “Divorce is a frequent issue and women often want to know what models Islam has [for this]. Sometimes we invite men and explain women’s rights to them to try and reconcile them.”

Chubak azhy Zhalilov, a former mufti of Kyrgyzstan who remains a prominent preacher, admitted the religious establishment had failed in some aspects of its duty towards women.

He said, “Islam places many requirements on how men should behave towards their wives, yet these requirements are not followed, and there’s no authority that would control this situation.”

However, he has himself made controversial statements about women. Most recently, in November 2017, he announced that he had taken a poor migrant as a second wife. Claiming that that it had been his duty to protect and help her, he called on other men to follow his example.

“I didn’t want to take a second wife,” he said in a sermon, according to the Kaktus news agency. “But I decided to be an example for others and that’s why I married a widow, she worked in Turkey as babysitter. My first wife was disappointed, and she has the right to be upset and jealous.”

This situation was raised by some lawmakers in parliament who argued that Kyrgyz law did not recognise the legality of such second marriages.

Nonetheless, Chubak Zhalilov said that he regularly raised issues of women’s rights, arguing that his lectures helped many people improve their relationships.

“They come to me to thank me and confess that they misunderstood Islam and treated their women abusively, which was a mistake as the religion teaches otherwise… Once they started to understand Islam, they managed to build harmonious relations,” Chubak Zhalilov said.

One problem is that issues of women’s involvement did not feature in the Concept of State Policy in the Religious Sphere, Kyrgyzstan’s first government strategy dealing with religion. Adopted in 2014, it stresses the importance of religious harmony and directs state institutions to support the Hanafi school of Islam as the most tolerant and suitable for Kyrgyz culture.

The Yiman Foundation was established by the president to fund suitable activities as part of this policy.

Foundation head Nurzhigit Kadyrbekov said that they were actively working with women, including via a number of workshops to teach the fundamentals of religion and social issues. However, although it grants scholarships to DUMK-certified imams, ehe xplained that few female DUMK staff or volunteers had access to such benefits.

“We need to work with women because men go to mosques and madrassas, where they satisfy their spiritual needs, while women sit at home and get both right and wrong information [about Islam] from the internet,” Kadyrbekov said. “In most cases, this is the reason why women are vulnerable to being recruited by radicals and extremists.”

“As you know, a mother has a much greater impact on a child than is father,” he continued. “If a mother gets incorrect information about Islam on the internet, it affects all of her children.”

The state commission for religious affairs, together with the Yiman Foundation and the DUMK, do hold educational activities for women on the moral and spiritual education of young people as well as how to combat radicalisation.

Workshops have also been held for female teachers in madrassas and women’s departments in the muftiate’s regional branches in Osh and Jalal-Abad on preventing and countering extremism.

“The main issues are social issues, but [also] the low literacy and low awareness of women, especially in remote areas of the country,” said a spokesman for the state commission for religious affairs.

As for female representation in the DUMK, he said that the state commission was “not competent to intervene into [its] internal affairs”.

“However, it should be noted that other religious organisations of Kyrgyzstan do not tend to appoint women to senior positions,” the spokesman continued.

Female activists say that the reason religious women are so excluded is the essentially patriarchal structure of communal institutions.

Mutakalim’s Frontbek kyzy said that a key contribution to raising awareness of women’s civil and religious rights would be to install permanent female staff in all DUMK’s offices.

She suggested that they could be represented in the DUMK’s religious ruling department and in its supervisory agency, the Ulema Council, as well as in its regional offices.

But religious leaders argue that Islam determined clear gender roles and that this in no way prejudiced women’s rights and dignity.

“Today society actively discusses the issues of women’s rights, women’s high status, about what the role of a woman should be. I think it’s wrong to think that we talk only about the Sunnas for men and forget about women. This is a misunderstanding,” Gapurov said.

He said that there were already a few women who worked in the muftiate, including in their regional units, adding, “Perhaps this issue would be discussed in the future.

“But the woman should have a high level of [religious] education and be able to explain Islamic norms because fatwa is one of the most difficult areas in religion.”

He noted that that there was a lack of female involvement in political as well as in religious life.

“I would absolutely welcome such female leaders who would open their YouTube channel, protect the rights of women, girls, explain Islam, educate religious women,” Chubak Zhalilov said. “There are many such women in other Arab states, in Turkey and other countries. If a woman has deep knowledge, why not? Of course it is possible.”

Giving Voice, Driving Change - from the Borderland to the Steppes
Kyrgyzstan
Women's rights
Connect with us