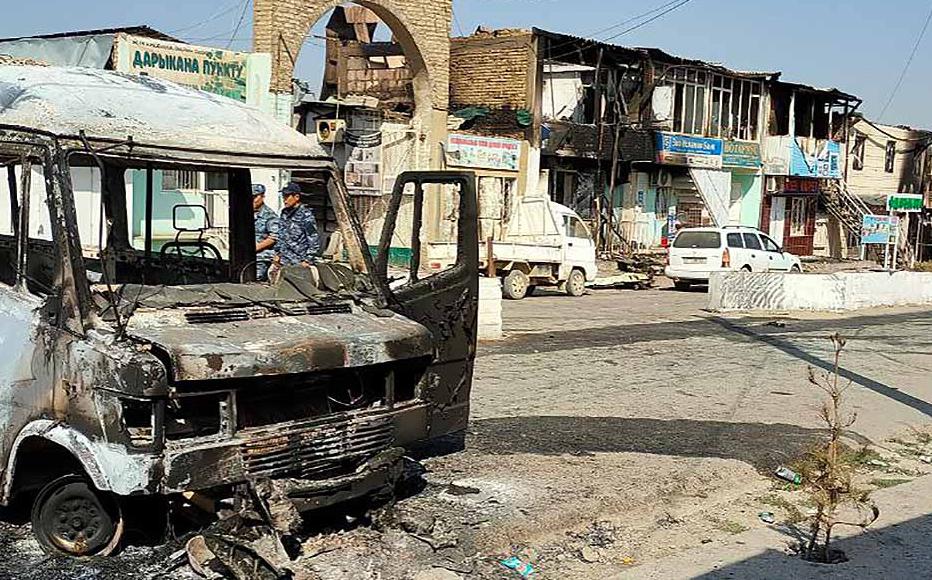 A village in the Leylek District of the Batken region after conflicts. © State Border Guard Service
The link has been copied

Clashes on the Kyrgyz-Tajik border in which at least 100 people died have highlighted the serious risks of the countries unresolved territorial disputes, with analysts from both sides calling for a change of approach.

Bishkek and Dushanbe traded accusations over who initiated the September 14-17 violence on a section of the border known as Keh in Tajikistan and Bulak-Boshi in Kyrgyzstan. According to the border guard service of Kyrgyzstan’s State Committee for National Security (SCNS), Tajik border guards opened fire in a disputed section in response to Kyrgyz demands to leave the area. Border troops of Tajikistan’s SCNS reported that Kyrgyz soldiers had attacked their border post.

Shooting continued intermittently until an evening ceasefire, but hostilities renewed on the morning of September 16. Kyrgyzstan reported fire along the entire perimeter of the Batken region border, while Tajikistan alleged in turn that Kyrgyz forces shelled settlements in the Isfara and Bobojon-Gafurov districts.

Amidst the clashes, Kyrgyz president Sadyr Zhaparov and his Tajik counterpart Emomali Rakhmon met at the Shanghai Cooperation Organisation summit in Samarkand and agreed to a ceasefire.

Although violence briefly flared the following day with shooting in the Chon-Alai district of the Osh region of Kyrgyzstan and the Lakhsh district of Tajikistan, the security services of both countries signed a September 19 peace agreement.

Kyrgyz officials said that 59 citizens were killed and 163 injured as a result of the armed clashes, with September 19 declared a national day of mourning. Tajikistan’s ministry of foreign affairs said that 41 Tajik citizens were killed, with numbers likely to rise due to the severity of injuries others sustained.

Although there are sporadic clashes along disputed sections of the border, this was the worst violence since more than 50 people died in fighting in April 2021.

Tamerlan Ibraimov, director of the Centre for Political and Legal Studies in Kyrgyzstan, said that the complex geography of the region, particularly its limited water sources, made it very hard for the parties to reach a compromise on borders.

He argued that the parties needed to agree at least a partial demilitarisation of the boundary to avoid a repetition of such events in the future.

"It means that in the border strip, say 15 kilometres in each direction, it is desirable to remove all armoured equipment, mortars, cannons and the like, while border guards should be left with only light small arms, enough to fight smugglers and border violators,” he said.

"Secondly, it is very important to further establish a system of mutual control, which can create conditions for at least partial trust between the parties,” Ibraimov continued. “Such a system could be created through agreements on mutual inspections, planned and unplanned. These measures would probably help to reduce the intensity of potential armed conflicts between the countries.”

Emil Dzhurayev, a political scientist based in Bishkek, noted that agreeing the border demarcation would not solve outstanding issues including water supplies and road access.

“They will have to be discussed and solved in a mutually acceptable way, individually,” he said. “And most importantly, everyone must understand that every violent conflict with shooting and casualties alienates us from any kind of solution.”

Tajik political scientist Parviz Mullodzhonov agreed that despite ongoing negotiations on delimitation of the border, underlying aspects had not been addressed.

"First, around Vorukh, the issues of water, land and pasture distribution remain unresolved. Nor has the problem of the road, which always causes conflicts between residents on both sides of the border, been resolved. All this means that sooner or later the fighting will resume, because the issues that lead to such a conflict have not been resolved.”

Mullojonov argued that substantial progress had been made in this direction before Zhaparov came to power and took a more aggressive stance towards the neighbouring country.

"He declared an economic blockade, closed the borders and brought troops to the border,” he continued. “In other words, there was pressure from the Kyrgyz side, resistance from the Tajik side and political tensions in the region were rising. The problem will be solved if the current authorities of Kyrgyzstan realize that the way of pressure is untenable. In general, both sides want to solve the problem, but the approach to the problem must be different.”

In addition, Mullodzhonov said, residents of the border areas on both sides were not cooperating with their own leadership.

“Both the Tajiks and Kyrgyz put pressure on their governments that, if our conditions are not met and the conditions of the other side are accepted, then we will take up arms and fight [to solve our own problems],” he said.

Tajik media expert Lola Olimova said that both sides had ramped up their military presence on the border since the previous outbreak of violence in April 2021 "instead of solving the humanitarian problems of the population and trying to complete the delimitation of the border”.

She called for a fundamental change of approach.

"Revanchist statements and rattling guns won't lead to anything good,” Olimova said. “We have forgotten in recent years that for centuries Tajiks and Kyrgyz lived peacefully. Problems were solved by other methods. Of course, now that so many people have died and so much destruction has taken place, it's hard to talk about trust. But still, in small circles, among friends and relatives who live on both sides of the border, it is necessary to slowly work to reconcile positions. People understand that there is no alternative to a peaceful life," Olimova continued, proposing a more grassroots approach to "to apologize to each other, to forgive and to start building a new life”.

One Tajik journalist, who asked to remain anonymous, said that the political culture of both countries was more of an impediment to resolving the problem than a simple agreement on a borderline.

"The main problem of both is the lack of a culture of tolerance, the lack of respect for the rights of others, the unwillingness to listen to the opponent,” the journalist said. “In our countries, the cult of force has been elevated to an absolute, no one wants to listen to the other, and everyone considers compromises as a defeat. Many countries have had and still have territorial claims on each other, but not everywhere it leads to shootings and murders."