Experts say contrast between care of children in state and private homes has huge impact on their prospects.

Experts say contrast between care of children in state and private homes has huge impact on their prospects. 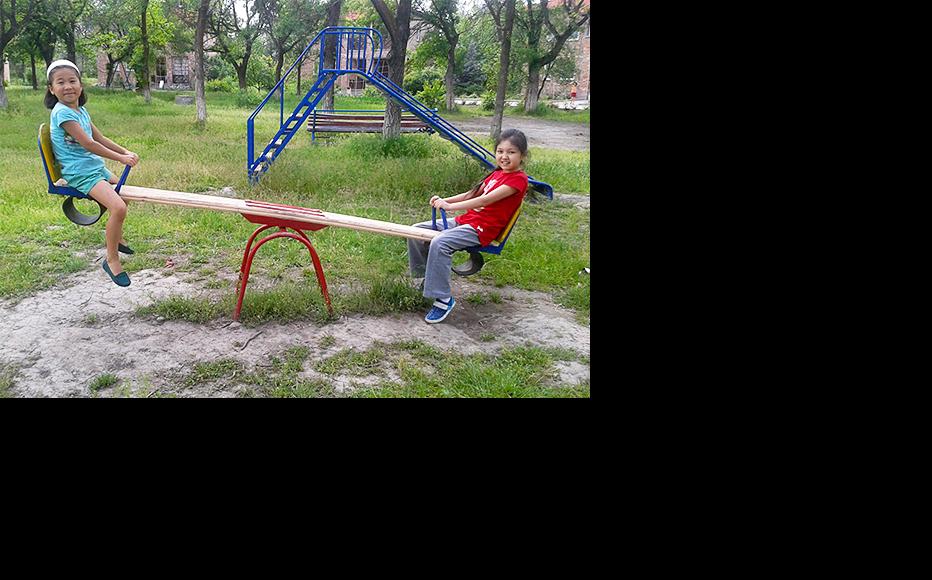 On a see-saw at the SOS Children's Village. (Photo: Jibek Karakeeva. Picture published with kind permission of SOS's Oksana Orozbaeva)
The link has been copied

Valery Gaiduk, 24, has always dreamed of becoming a policeman. But having already spent six years in prison for numerous petty offences, he knows this dream is unlikely to come true.

Gaiduk grew up in a government-run children’s home near Bishkek, the capital of Kyrgyzstan, and now lives in a hostel for young people from the same background. He received only a basic education at school and has never been in stable employment.

Although he takes responsibility for the way his life has turned out, Gaiduk still thinks things might have been very different if the children’s home had invested more in him and continued to support him after he left.

By law, young adults leaving children’s homes in Kyrgyzstan are entitled to housing, education and financial benefits, but experts say that in practice this rarely materialises.

They say there is a marked difference between young people raised in large state homes and those who have been through the more personalised private system. Government-run children’s homes usually make their own educational provision, while private homes send the children to mainstream schools, which has positive effects on both their educational achievement and their social skills.

Igor Belyaev, head of an NGO called Protection of Orphans’ Rights, grew up in a state children’s home. His education never progressed beyond high school, and he says those who have been through the state system are lucky if they end up with a vocational qualification. Since no foreign languages are offered and no effort made to develop social skills, children from these institutions find it very difficult to pass university entrance exams.

“If [children’s homes] put in more time and paid more attention, the quality of education would be better,” Belyayev said.

“When inspectors visit, they ask, “Are you ok here?” and everyone yells, “Yes!” If anyone dares to say things are bad, they start shouting and beating them,” he recalled. “Children who cry or misbehave can go without lunch.… It takes years to stand on your own two feet and adapt to society.”

Belyaev has maintained contact with many of his peers from the children’s home.

“There’s no point concealing it – they include prostitutes, thieves, criminals, alcoholics and homeless people,” he said. “How could they have turned out any differently, since they were never shown an alternative? No one actually wants to fall to that level.”

Many others try to advance themselves and go into further education, but that is hard when they get little support.

“First I took a course in painting and decorating at a vocational college. I received a grant of 250 soms [four US dollars] a month, which wasn’t enough. So I had to work as a dishwasher and a cleaner,” she told IWPR as she took a rest from cleaning floors and windows in the hostel where she lives. “I love cooking and I’ve always dreamed of becoming a cook in a restaurant. But I have never had the money to pay for the course.”

Loginova is determined to give her children a better upbringing than she had.

“What I want most is to raise my daughters. They are aged three and one-and-a-half. I don’t want them to repeat what I’ve done,” she said.

Aynura Ormonova heads the Our Voice organisation, which has studied the outcomes for people from state-run children’s homes. She agrees that more need to be done to improve their lives as young adults, with government support that should continue until they become full independent.

“Once they receive some moral support and guidance, and feel they can rely on someone, they change dramatically. They are desperate to succeed and they need to be supported,” she said.

There are some success stories among those who have been through the state children’s home system.

Aynura Heidarova, 32, is a lawyer and has a postdoctoral degree. But she knows she is an exceptional case, and that it was only her own determination that got her a good education.

“When you leave the children’s home, you get no benefits or allowances. They don’t even tell you what to do or how to do it,” she said.

Outcomes are different for young people coming out of private, charity-funded children’s homes. Many of them go on to university, start businesses or travel abroad for work.

Anna Serebryanskaya, 21, left the private Meerim Bulagy children’s home, on the shores of Lake Issyk Kul in eastern Kyrgyzstan, three years ago, and already owns her own company.

She spent some time at medical school before leaving to start a business buying and selling jewellery.

“I doubt I could have achieved success without my upbringing and the support of my ‘family’ and ‘mother’,” Serebryanskaya said. She explained that the home functioned as a single large family, with children assigned to house parents.

Serebryanskaya’s ‘mother’, Gulnara Degenbaeva, is proud that so many of the children have gone on to higher education in Kyrgyzstan – some at the prestigious American University of Central Asia – and in Russia.

“Our wards must complete 11 years of school [as opposed to nine in state-run homes]. They go to local schools and interact and socialise with the other children,” Degenbaeva said. “They join various clubs, develop their potential and decide what they want to do in future.”

Degenbaeva laughed out loud when asked government benefits for those leaving the Meerim Bulagy home. “In our dreams!” she said.

She said the Meerim Bulagy institution had to support itself. “No one gives us financial backing,” she said. “We earn money to feed ourselves. We sow wheat and keep livestock. We make jam and sell it. It’s very difficult, but we have no one else to rely upon. The government doesn’t help.”

Another successful model is the international SOS Children’s Villages project. Groups of around five children live in separate houses, each with a guardian, until they leave school at 18.

Oksana Orozbaeva, director of the Austrian-funded SOS Children’s Village in Kyrgyzstan, does not like it being called an orphanage. Instead, it is made up of ordinary family units.

“Our children achieve whatever they want,” she said. “They don’t end up on the streets like the kids from state-run homes, because they know what they want. We motivate and encourage them,” she said.

Photos of the children who have passed through the SOS Children’s Village are posted on the centre’s website and in its offices. Some have left to study in the United States, Europe, Russia, and Kazakstan; others have gone to universities in Kyrgyzstan.

Orozbaeva says that every young adult is given a grant of 5,000 US dollars to help start them off in life once they leave.

Government officials are unwilling to acknowledge that a gulf exists between state and private children’s homes.

Saltanat Mambetova, from the education and science ministry, insisted that children in the state system also received personalised care.

“The supervisors are committed to ensuring school-leavers get an education. They run around for each one, seeking benefits and free courses for them,” she said.

Mambetova denied that educational standards were low or that children were not well treated in the state system. She said they were offered the same advantages as those from private homes – free training and accommodation at vocational colleges, and partial scholarships at university.

“If we have individual cases of failure, that doesn’t mean they are all like that, right?” she said.

But experts say the state system needs a drastic overhaul of its approach to both educational and emotional aspects of caring for young people.

“The system of education in the state institutions is poorly thought-out, and it’s in a sorry state. If the right personalised approach to children is found, they blossom,” she said. “We established our centre in order to support those leaving state homes. We ran training courses for them, but they are very closed in on themselves and afraid to trust anyone because they have been betrayed too many times.”

Kyrgyzstan
Children, Education
Connect with us