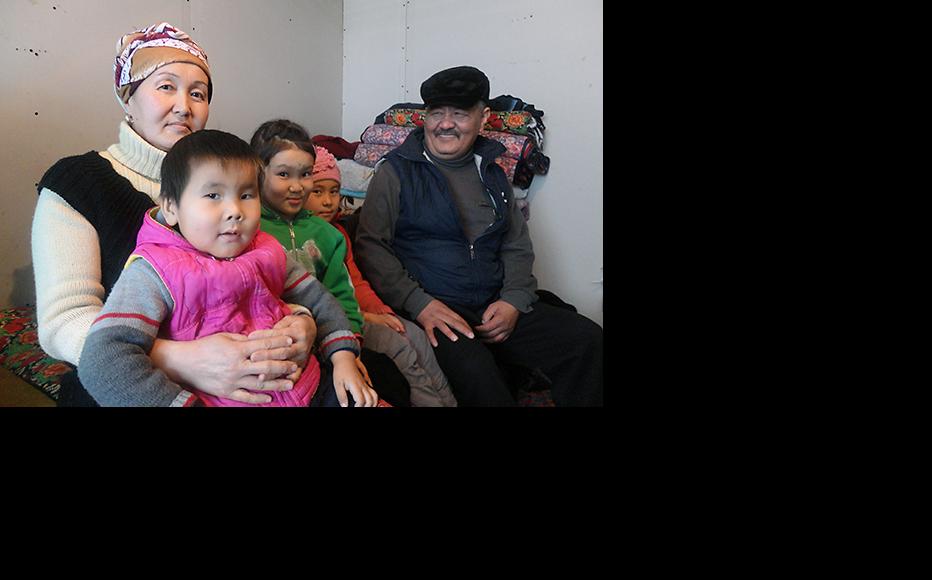 Bubusaira Samatova’s day starts at seven in the morning when she gets her granddaughter Aysalkyn ready for school. Samatova’s daughter, Nazira, left the nine-year-old behind when she and her husband went off to work in Russia five years ago,

After seeing Aysalkyn off to school, Samatova, then turns her attention to four-year old Arslan and six-year old Diana. They are the children of her youngest son who also is also away in Russia with his wife.

“It’s a good my other two children stayed at home and take care of their kids themselves, otherwise my house would have turned into a kindergarten,” Samatova said.

The 54-year-old, who lives in the village of Cholpon in northern Kyrgyzstan, says that as well as struggling with the physical demands of looking after young children, she finds it hard to explain to them why their parents left them behind. Samatova recalls that when Aysalkyn – then aged four – was first left with her, she “cried a lot, she missed her parents, she didn’t obey me and became withdrawn”.

After a couple of months, Aysalkyn warmed to her grandmother, but in turn grew distant from her parents and began claiming that Samatova was in fact her mother.

“I tell her off and say her mother is Nazira and I’m her grandmother,” Samatova said, adding that she understands why Aysalkyn feels this way.

The younger two, Arslan and Diana, are also growing estranged from their parents, who can only afford to visit once every two years. During their last trip home, Samatova says, the children clung to her and shied away from their actual parents, and her daughter-in-law burst into tears.

IWPR spoke to Aysalkin’s mother Nazira, who works in a bakery in a town near Moscow. She said that she and her husband had to leave Kyrgyzstan to earn some proper money, and are now saving. Back home, “the money we used to earn was just enough to cover rent, nursery fees and food”, she said.

Nazira says she too finds it difficult to be apart from Aysalkyn but does talk to her frequently on the phone.

An estimated 1.5 million Kyrgyzstan nationals work abroad, with about one million in Russia and more than 100,000 in neighbouring Kazakstan. The rest are mostly in Turkey, China and Europe.

Many are forced to leave their children behind when they go abroad, generally with grandparents but sometimes with other relatives if that is not possible.

Svetlana Bashtovenko, head of the Resource Centre for the Elderly, was recently in Russia meeting Kyrgyz labour migrants as part of a research project. She said there were no statistics on how many migrants had left their children behind, but said it was undoubtedly a major concern.

“Given that labour migration has been going on for the last 20 years, one can say we have an entire generation of children who grew up without their parents,” she said. “This is particularly true in the south [of Kyrgyzstan], but it is also the case in the north. Some 80 per cent of families in Kyrgyzstan are affected by migration to a greater or lesser extent.”

Bashtovenko explained that most labour migrants left their children for a minimum of three years. This was the time it took them to find a job, settle down and save enough money to visit them.

Children get used to such absences, she said, but find it hard to understand that their parents have left them behind to try and proved a better future for the family.

Experts say prolonged parental absence can lead to a range of psychological and social difficulties.

According to Mavluda Fazinova, head of Integration of Communities, an NGO dealing with migration issues in Kyrgyzatan, teachers report that children from migrant families account for a high percentage of those who miss classes, display aggressive behaviour or get into trouble.

“We noticed that everything that happens to a child left in the care of an uncle or an aunt – for example feeling upset after being told off, feeling resentful or excluded – affects its psychological wellbeing and also has an impact on its social status,” Fazinova explained.

Kiyal Tukubaeva, deputy head of a school in the town of Balykchy, said that had seen many such children. They were left with relatives who had families of their own and who did not see the foster child’s education as a priority.

“There are five or six pupils whose grandparents make sure that they attend school and learn. But the rest are more interested in using them [the children] to do household chores or other work outside the house,” she said.

As to the effects of separation from parents, Tukubaeva said, “Different kids react differently – some will study well but will tend to become withdrawn and isolated. Others, on the contrary, think that since their parents are far away, no one is going to tell them off, so they skip school.

Olga Bidenko, a psychologist with the Centre for the Protection of Children, said that children who experienced extended periods of separation were liable to have difficulties in school.

“This resentment and lack of love will affect the child,” Bidenko said, adding that this would colour other relationships “as they don’t have any other example”.

Although it may be easier to explain the reasons for parents leaving to young adults, they face their own problems.

A widow from the village of Stretinka in northern Kyrgyzstan told IWPR about the trouble she was having with her 14-year-old grandson, the eldest of three children she was caring for as their mothers, her daughters, were away in Russia.

Unable to keep a check on his activities, “I found out that he skipped school for a month, and went and played computer games instead,” she said.

The 62-year-old, who asked not to be named, said she was finding childcare increasingly difficult, in part also because she had heart and leg problems. A third daughter is currently in Russia, and is planning to leave her young baby with her as soon as she comes back to visit.

But when her two daughters call and ask how she is doing with the children, she replies that everything is fine.

Last year, an initiative called the Grand Public Council was launched by rights groups with the support of the Kyrgyz authorities. It is aimed at coordinating the work of NGOs, government agencies and parliament in providing assistance to migrants.

The limited support that exists for relatives caring for migrants’ children comes largely from NGOs.

In the village of Eshperov in the northeastern Issykul region, most residents of working age have moved to the eastern Russian region of Yakutia. The village has opened a privately-run children’s centre where grandparents can drop off pre-school kids during the day and where older children can go after school to get help with their homework.

Fazinova’s NGO is currently implementing a project aimed at setting up such self-help groups in the Moskovsky district of Chui region.

Elsewhere in northern Issykul, the Shoola Kol NGO led by Antonina Li works with schools and police to support migrants’ children in the village of Bokonbayevo. Li believes the work is important, but would like to see government doing more to create jobs in Kyrgyzatan to slow the exodus of labour migrants.

“All these grandparents, nurseries and support at school are not going to replace parental love,” Li said.

Bashtovenko, from the Resource Centre for the Elderly, is pessimistic about the prospects of change. On the contrary, she predicts that labour migration will rise as Kyrgyzstan moves towards closer economic integration with Russia and other former Soviet countries. The government is hoping to join the Customs Union with Russia, Kazakstan and Belarus, and after that the proposed Eurasian Economic Union. That would open up the possibility of free labour movement within the whole bloc. At the moment, Kyrgyz citizens need a work permit for Russia.

However, Bashtovenko agreed that the authorities needed to do more to support the families and children of labour migrants.

“These children are our future – our future labour force, managers, the people who will one day govern the country, and we need to think about them seriously,” she said.

In the meantime, Samatova is teaching her second granddaughter, Diana, the alphabet as she prepares to start school in September.

She knows her children are unlikely to return from Russia any time soon.

“Neither my son nor my daughters have saved enough money,” she said. “Of course the years go by and my grandchildren will grow up without parents. But they will [eventually] have a house of their own and a better life and will come to understand that their parents are doing it for them.”

In Russia, Nazira expressed optimism that she and her daughter Aysalkin would be able to pick up where they left off.

“We stay in touch with her, and we will come back and she’ll become accustomed to us again,” she said.

Timur Toktonaliev is an IWPR contributor in Bishkek.

Kyrgyzstan
Children
Connect with us