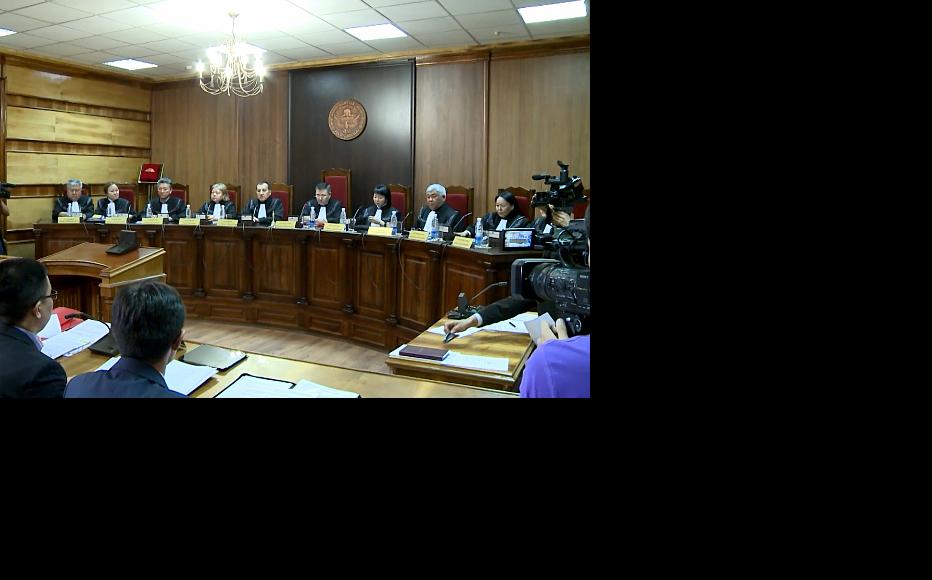 Kyrgyzstan’s Constitutional Chamber in session. (Photo: Timur Toktonaliev)
The link has been copied

Big changes to Kyrgyzstan’s constitution giving central government powers to appoint local officials and top judges have been shelved for the moment, but not dropped.

On June 27, President Almazbek Atambaev asked parliament to withdraw the amendments from consideration so that further work could be done on them. It is not clear whether he was prompted to put the legislation on hold by vocal criticism from local NGOs and international institutions. However, he stressed that constitutional change was necessary and the process would be revived once a parliamentary election due this autumn was out of the way.

The package would give the prime minister new powers to appoint local government heads. Members of parliament would lose their ex officio immunity, and could be deprived of their seats by their party leaders. The president and parliament would appoint the chairperson and deputy chair of the Supreme Court, posts now filled by an internal election. Finally, the Supreme Court’s Constitutional Chamber would be separated off and given vague powers to monitor compliance with the constitution “alongside the prosecution service”, suggesting a subordinate, advisory role.

These changes were agreed by the leaders of all five major parliamentary parties, although the 2010 constitution, which enshrines principles of parliamentary democracy rather than top-heavy presidential rule, explicitly bans further changes for a ten-year period. This was set out in the interests of stability, given that the constitutional reform followed popular unrest, the ousting of President Kurmanbek Bakiev and ethnic bloodshed, all between March and June that year.

The party leaders want the amendments to go to a national referendum, just as the 2010 constitution did. A bill providing for a referendum in October this year was approved by parliament’s human rights committee on June 3.

FEARS THAT WHOLE DEMOCRATIC SYSTEM IS AT RISK

The proposed changes – and the centralising instincts that seem to lie behind them – have caused a great deal of disquiet. The Civic Council for Monitoring the Judicial System, an advocacy group, wrote to Atambaev and parliament in early May warning that the move would turn the Constitutional Chamber into “the president’s legal department”. (See Constitutional Tinkering in Kyrgyzstan on these issues.)

“They [amendments] destroy the parliamentary system, strengthen the diktat of [party] faction leaders, strip legislators of their immunity, and increase the influence which the president and parliament exert on the judiciary stronger,” the statement said, warning that this would “destroy the system of checks and balances and could lead to power being usurped and pave the way for a repeat of the tragic events [revolutions] in March 2005 and April 2010.”

At a conference called “I Do Care”, held in Bishkek on June 23-24, participants drafted a letter to President Atambaev urging him to veto the constitutional reform package. On the second day, protesters gathered outside the main government building known as the “White House” to drive the message home.

Meanwhile, the Venice Commission, a group of constitutional law experts who advise the Council of Europe (of which Kyrgyzstan is a member), weighed in. In a statement issued jointly with the OSCE’s Office for Democratic Institutions and Human Rights, the Venice Commission said the draft amendments “appear to raise concerns with regard to key democratic principles, in particular the separation of powers and the independence of the judiciary”. There followed a point-by-point set of recommended revisions, mostly proposing a return to current arrangements.

On the Constitutional Chamber, the joint statement said the changes being envisaged were “an enormous step back backwards from a system of true constitutional supervision and would also abolish the right for every individual to challenge the constitutionality of a law or another regulatory act”. Abolishing the chamber as an independent body with effective powers of judicial review would, the statement warned, “result in a severe regression of the rule of law”.

In Kyrgyzstan, critics of the changes believe that the president and his government are indeed intent on weakening the Supreme Court by placing its top posts within the president’s gift, and on dismantling the Constitutional Chamber, which has ruled against the government in a number of cases. Most recently, Judge Klara Sooronkulova was taken off a case she had been tasked examining, concerning a law on biometric data passed last year. The suspicion was that she was going to rule that it was unconstitutional. She was subsequently suspended by the Judicial Council, and proceedings began against another Constitutional Chamber judge who supported her. (See Judge's Dismissal Looks Like Government Interference.)

The Venice Commission’s chairman, Gianni Buquicchio, issued a statement saying that by the nature of their work, constitutional judges were “in danger of displeasing” the executive. “The dismissal of Judge Sooronkulova is an indication that there are not sufficient guarantees for the independence of constitutional judges in the Kyrgyz Republic,” he said.

WHO IS THE DRIVING FORCE FOR CONSTITUTIONAL CHANGE?

The move to change a constitution that has been widely praised and is only five years old reform package was unusual in that it came with a show of unity from the leaders of all the main parties in an often fractious parliament – the opposition Respublika and Ata Jurt as well as the governing Social Democrats and their coalition partners Ata Meken and Ar Namys. Some commentators suspect that it was really the president’s office that wanted the amendments, and that it banged heads together to get the party leaders to show a united front.

After the president announced that the reform process should be put on ice for the moment, Ar Namys leader Felix Kulov said that he too had changed his mind.

“If the president hadn’t come to us, there are definitely no other forces that could have influenced me or changed, not even those rallies [where] people just shouted but failed to put their arguments down in writing,” Kulov told IWPR. “The president acted as arbitrator…. I wouldn’t have agreed with his arguments if they’d been expressed by anyone else.”

Elmira Nogoibaeva, head of the Polis Asia think tank, believes that with a parliamentary election coming up later this year, all the main political leaders are looking to win the president’s good will, and that makes them “very flexible” on policy issues.

Nogoibaeva points to the unanimous political support given to the constitutional reform plan, and then to the idea of shelving it.

“Judging by their dramatic change of mind, the draft amendments to the constitution cannot be seen as a decision they took on their own. Such initiatives are designed a long way away from parliament," she said. "The election campaign is getting under way. So party loyalty to the president has been turned up to the maximum.”

When he asked parliament to withdraw the amendments, President Atambaev insisted that constitutional change was needed and that had strong support from both legal experts and the electorate.

Kulov agrees with this, too, saying “the process can no longer be stopped”.

“We won’t just return to it – the list of amendments will be expanded and the changes won’t be as piecemeal as now, because all the parties taking part in the election will have proposals for constitutional reform that are even more radical than ours,” he said.

Sheradil Baktygulov, an expert in public administration, believes the constitution will be changed, one way or another.

“The proposed amendments can be introduced by hook or by crook, if not in the constitution itself, then by means of constitutional laws,” he told IWPR. “For example, if it proves impossible to make the Supreme Court chair an appointed position by direct means, the process can still be made controllable by drafting other laws. Any project can be pushed through under the pretext of improvement. If this direct attack on the constitution fails, legislators will be able to achieve the same thing next year.”

Anna Yalovkina is an IWPR contributor in Bishkek.

Kyrgyzstan
Rule of Law
Connect with us