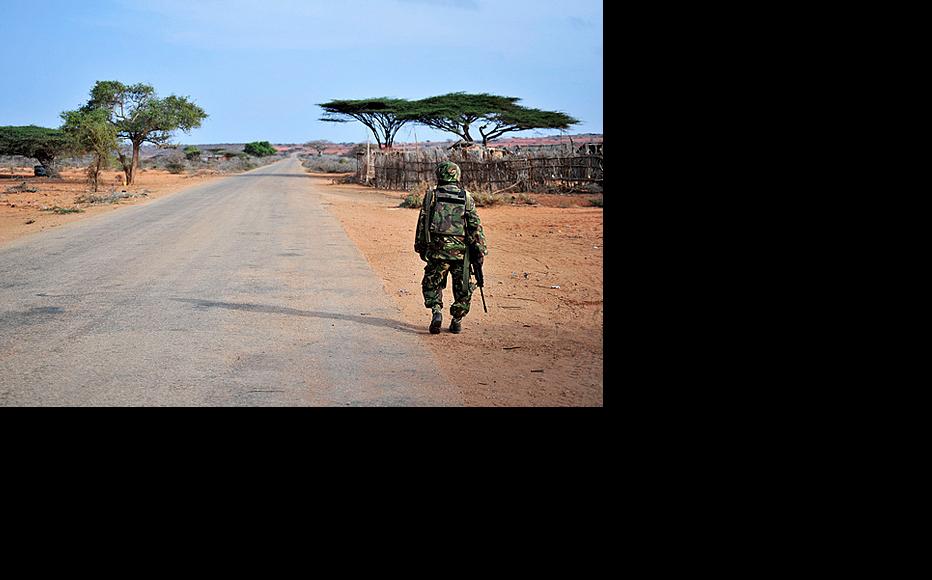 A member of the Kenya Defense Force stands guard at Kismayo International Airport in the southern Somali city of Kismayo. (Photo: UN Photo/Tobin Jones)
The link has been copied

Reports that militants who attacked Nairobi’s Westgate shopping mall last September entered Kenya by road have heightened concerns that the government has failed to bolster security adequately on the country’s borders.

At least 67 people were killed and hundreds of others were injured in the attack by members of al-Shabab, a Somali group with links to al-Qaeda.

An unnamed Western official told the BBC in November that four Islamic militants entered Kenya from Somalia in a car in June 2013 via a standard border crossing.

Kenya shares its northern borders with Somalia, Ethiopia and South Sudan, with all designated entry points manned by a combination of staff from the Kenya Defence Forces (KDF), the General Service Unit (GSU) and the Administration Police (AP).

Bashir Abdullaih, a retired major-general who used to serve with the KDF in northern Kenya, says the government should have invested in new surveillance technology to monitor the borders.

“If you want to control our borders – because the threat is there – let the government deploy the border security system,” Abdullaih said. “Without that, the normal policeman and immigration man will not help. On the borders, there are technologies that can be deployed even if some points are not manned. We can get border surveillance systems – they are very costly, but nothing is as costly as losing lives.”

In June 2013, the government released funding of 67 billion Kenyan shillings (nearly 800 million US dollars) to the National Police to boost national security.

Of that amount, four billion shillings was earmarked to buy security equipment. A further 4.5 billion was intended to enhance security operations across the country. But nothing was allocated specifically to improve border security.

Other concerns centre on widespread corruption, which could be allowing foreigner nationals and weapons to enter the country illegally.

According to Abdullaih, the problem is particularly grave along the border with Somalia.

“Corruption has come to play a great role in the illegal entry of people to Kenya,” Abdullaih, who served in Baragoi and Turkana told IWPR. “There is lawlessness in Somalia, [and] people who do not understand the rule of law and order corrupt their way to Kenya.”

A GSU officer who spoke to IWPR on condition of anonymity said he witnessed a massive influx of illegal goods and immigrants while working on the border in 2009 and 2010.

“There are a lot of betrayers in the police force, especially the Administration Police. They tell [offenders] where [the border] is being manned, so they avoid coming through where we are. They know the route they should use, they say ‘use this route, don’t use this one because the security is there’,” he said.

According to the officer, people wishing to cross into Kenya would sometimes pay large bribes to GSU members.

“[GSU officers] get a lot of money even to bring in people, not just illegal items. To bring one person to Kenya, one gets sometimes even 100,000 Kenyan shillings,” he said.

Corruption is also a problem at police stations located along the border. People who are detained are often set free without good reason, the GSU officer said.

“Even if by good luck we arrest them, once we take them there, we don’t know what happens, they are released,” he said. “We have betrayers in GSU, [national] police and AP [Administration Police]. Of course they are bribed,” he added.

Mutea Iringo, permanent secretary at the ministry of state for provincial administration and internal security, declined to comment specifically on whether his department should have invested earlier in improving border security.

But he told IWPR that in spite of last June’s tranche of security-sector funding, his office still did not have the funds to support an effective border control system. He said the security sector had a shortfall of 82 billion shillings (950 million dollars), which was stopping it from buying much-needed modern technology.

Nonetheless, Iringo said, the government has boosted border security measures in the aftermath of the Westgate attack, including by linking all crossing points on a single computer network. That allows officers to access entry and exit data from a central source in real time.

“We have stepped up measures to ensure that illegal aliens do not penetrate into the country,” Iringo told IWPR, adding that the next step was to be the installation of CCTV cameras at all border entry points.

According to Iringo, since the Westgate attack the government has also started computerising personal records to help eliminate fraud and corruption.

“To deal with crime effectively, the government has embarked on the process of digitising all security registries such as [crime log] books, birth certificates, identification cards, passports and work permits,” Iringo said.

Another practical challenge is how to police a long, porous and often unmarked border that runs through difficult terrain.

Ali Roba, the governor of Mandera on Kenya’s border with Somalia, is particularly worried that in many places the boundary is unmarked, making it hard to tell where one country ends and the other begins.

Roba told IWPR that demarcating the border between Somalia and Kenya would help control the flow of human traffic.

“We have started dealing with the issue by engaging the local leadership from across [the border in] Somalia and… Ethiopia which are just within arm’s reach of our neighbourhood,” he explained. “We are looking at strategies of recreating the no man’s land – the space that divides the Somalia border and the Kenyan part – in order to make sure that this movement of persons will be a bit controlled.”

The northern reaches of Kenya are home to nomadic groups which cross the border into Somalia or Ethiopia to graze their animals.

Kia Bare, who comes from Mandera, told IWPR that like other camel herders in North Eastern Province, he freely crosses the border in search of food and water for his animals.

“Sometimes we travel very far from here,” he said. “We can’t even tell when we are in Kenya or not in Kenya. But we know some places are dangerous for us because some people attack us and steal our animals.”

Bare owns a gun which he bought at the Kenyan-Somali border. He says he needs it to protect his animals.

“If you don’t have this thing, you cannot survive, you can be killed, your animals can all be taken away,” he said.

According to Bare, guns are easily available in border areas.

“I have not lost mine since I bought it, but my friend had his stolen and he bought another one just recently, not many months ago,” he said.

Abdullaih said it was difficult to police groups of nomads every time they crossed the border.

“They do not have to come through certain points,” he said. “There are Somali Kenyans and other Somalis from Somalia. It is hard to [identify] which points to seal. The porous borders really contribute to the flow of arms and ammunition. We do not have the Berlin Wall.”