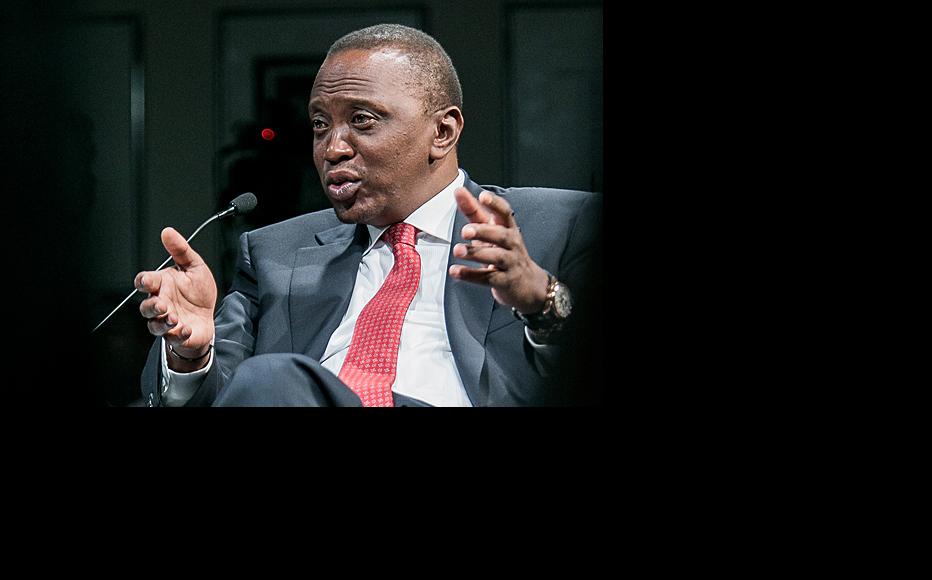 Uhuru Kenyatta, President of Kenya. Kenyatta's lawyers have asked judges at the International Criminal Court to stop his trial for crimes against humanity before its scheduled start date next month. (Photo: Benedikt von Loebell/World Economic Forum)
The link has been copied

Lawyers for Kenyan president Uhuru Kenyatta have asked judges at the International Criminal Court (ICC) to stop his trial for crimes against humanity before its scheduled start date next month.

In an October 10 submission to judges, Kenyatta’s lawyers alleged that three prosecution witnesses and an intermediary had intimidated and interfered with potential defence witnesses, and in doing so perverted the course of justice.

“The defence is in possession of substantial evidence of a serious, sustained and wide-ranging abuse on the process of the court,” lawyers wrote in the filing.

Kenyatta’s legal team, British lawyers Steven Kay and Gillian Higgins, argued that the individuals concerned had sought to stop witnesses cooperating with the defence and tried to bribe witnesses to change their testimony “in line with the prosecution’s case”.

The lawyers said the actions of the prosecution’s intermediary and one witness had “irredeemably tainted” the evidence of ten further witnesses whom they had introduced to prosecutors.

Kenyatta is facing trial at the ICC for orchestrating the violence that erupted following a disputed presidential election in Kenya in December 2007.

He is charged with murder, rape, persecution and forcible population transfer after more than 1,100 people were killed and 650,000 fled their homes in the chaos.

His trial is scheduled to begin on November 12.

Kenyatta’s legal bid comes amid speculation that further requests may be made to the United Nations Security Council to step in and defer both his and the Ruto/Sang case on the grounds of national and international security.

Under the ICC’s founding charter, the Rome Statute, the Security Council can request the court to break off proceedings for a period of one year, if doing so is in the interests of national or international security. Such a request would be in line with Chapter Seven of the UN’s own charter.

Following a four-day siege by members of the Islamic group al-Shabab on a Nairobi shopping centre last month which killed 67 people, the request could argue that Kenya’s leaders needed to remain at home to deal with security matters. (For more, see Nairobi Attacks Create Dilemma for ICC.)

Analysts are divided on the merits of such a move.

Some security experts in Kenya believe that the Westgate attack is a legitimate reason for the Security Council to postpone the trials.

“Al-Shabab is not a Kenyan militia group; it is an international terrorist outfit giving a headache to the whole world,” Joash Mwilu, a retired major and security consultant in Mombasa, told IWPR. “So for sure it amounts to a threat to national and regional security, and anybody, including the UN, should listen to us.”

Meanwhile, lawyers argue that the key issue that needs to be considered is whether the absence of Ruto and Kenyatta from Kenya while they attend their trials has the potential to destabilise the country.

Ahmed Kassim Mhuri, a lawyer in the coastal city of Mombasa, was sceptical that the Security Council would deem the officials’ presence at home to be essential to national security.

“That [argument] wouldn’t work,” Mhuri told IWPR. “Kenya is known to be stable and as having strong institutions, especially security installations, which function even when the president is not around.”

Mhuri pointed out that the ICC had scheduled the hearings for Kenyatta and Ruto at different times, so that one of the two could always be in Kenya.

“At any given point, one of them is around to be in charge of the country, so there is no leadership vacuum to convince the Security Council to recommend a deferral,” Mhuri said.

Both Kenyatta and Ruto have asked ICC judges to allow them to miss much of the proceedings in The Hague so that they can remain in Kenya to handle state affairs. Kenyatta has also applied to follow his trial by video-link from Nairobi. These requests are pending before the court.

Any decision by the UN Security Council under Chapter Seven needs the unanimous agreement of all its permanent members. The decision is a political and not a legal one.

William Schabas, a professor of international law at Middlesex University in the UK, noted that the Security Council assesses deferral requests on a case-by-case basis.

“There is not even a right or entitlement to have the case heard by the [Security] Council,” Schabas said, adding that the decision did not hinge on any objective legal standard. “It would be because the members of the Security Council thought it made sense at the time,” he added.

If a deferral was sought and granted, it would be the first decision of its kind taken by the Security Council.

It seems unlikely, however, that Nairobi will decide to pursue this option. The Security Council rejected a similar request from the Kenyan government in March 2011, shortly after the ICC named six suspects in its investigation into the 2007-08 unrest.

In May this year, Kenya’s ambassador to the UN made an unsuccessful bid to get the Security Council to drop the ICC cases altogether.

Speaking to journalists in Nairobi on October 9, Foreign Minister Amina Mohammed said that her government had not yet considered re-applying for a deferral.

“We tried that some time ago, but the outcome was not positive. It is not something we are considering right now,” Mohammed said.

However, the African Union (AU), meeting this week in Addis Ababa to discuss its relationship with the ICC, may request the one-year deferral instead.AU head Nkosazana Dlamini-Zuma suggested on October 8 that the bloc would consider asking the Security Council to defer the Kenyan cases following the summit.

Initial indications are that the Security Council is wary of approving a request for deferral.

Security Council Report, produced by an independent non-government body that monitors the Council’s activities, said that UN envoys in the Ethiopian capital had “expressed a willingness” to consider a request from the AU, but noted that they had already considered two previous requests on the issue without approving them.

“Furthermore, some Council members have concerns that such a deferral might well work against the cause of justice, as there have been reports of witness tampering in the Kenya cases which may be exacerbated if such a deferral were granted,” Security Council Report said in its account of what was said.

Opponents of a possible request for deferral argue that the Westgate attacks do not compare in scale to the killings and atrocities for which Kenyatta and Ruto are facing trial.

“It would be ludicrous for the [Security Council] to grant Kenyatta a deferral on the basis of the Westgate Mall attack,” Makau Mutua, a professor of law at Buffalo Law School, at State University of New York, told IWPR. “As terrible as the al-Shabab attack was, it pales in comparison to what Kenyatta and Ruto are charged with…. They shouldn’t be allowed to manipulate the attack to escape justice.”

Ultimately, it will be up to the Security Council as to what degree it feels security in Kenya and further afield might be affected by the Kenyatta and Ruto trials.

“The question is really whether the reasons resonate enough with the members of the Council so that they take it up,” David Kaye, a law professor at the University of California, said.

Joseph Akwiri is a freelance reporter in Mombasa. Matthew Rhodes is an IWPR intern in The Hague.