Hague court is seeking Walter Barasa’s extradition on charges of interfering with its witnesses.

Hague court is seeking Walter Barasa’s extradition on charges of interfering with its witnesses. 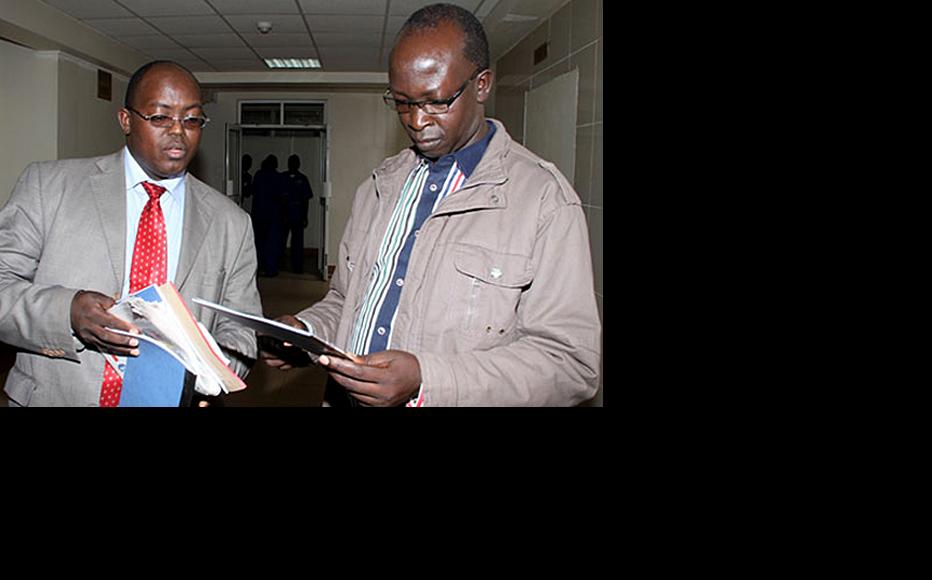 Walter Barasa (right) with his lawyer Kibe Mungai. (Photo: Capital FM)
The link has been copied

The High Court in Kenya has issued an arrest warrant against Walter Barasa, a former journalist wanted by the International Criminal Court (ICC) to face charges of bribing witnesses.

Justice Richard Mwongo issued the warrant for Barasa’s arrest on May 14 following an application lodged by Keriako Tobiko, the Director of Public Prosecutions (DPP). A source in the DPP’s office told IWPR that the application was made to the court last week.

The ICC issued an arrest warrant for Barasa in August 2013. but under Kenyan law, the local authorities must obtain a warrant from a national court before arresting the suspect or extraditing him to The Hague.

The ICC’s prosecutors filed charges against Barasa for bribing and attempting to bribe witnesses in the case against Kenya’s deputy president William Ruto.

Ruto went on trial alongside broadcaster Joshua Arap Sang last September. The warrant against Barasa was made public the following month, after a failed attempt to secure his arrest while he was abroad in an unspecified country.

Ruto and Sang are on trial at the ICC for their alleged role in electoral unrest that hit Kenya six years ago. More than 1,100 people were killed and 650,000 others were forced from their homes in violence that erupted following a disputed presidential election in December 2007.

Kenyan president Uhuru Kenyatta is also facing charges at the ICC, although his case has been postponed several times and is now scheduled for October.

Justice Mwongo issued the warrant for Barasa’s arrest under Section 30 of Kenya’s International Crimes Act (ICA), which requires a court to confirm the identity of the person wanted by the ICC.

“There is no doubt that Barasa is the person sought, having presented himself in this court, and to whom the request relates,” he ruled.

Kenya’s interior minister Joseph Ole Lenku had previously asked for a warrant for Barasa’s arrest, but the suspect’s lawyer, Kibe Mungai, challenged the application on the grounds that it was unlawful.

In January, however, Justice Mwongo ruled that the High Court was unable to hear Mungai’s challenge to the request for an arrest warrant. At the same time, the judge ordered a stay in proceedings – including action on the arrest warrant – but in a later decision in March, he reversed this, effectively giving the green light for the warrant to be issued.

Speaking to IWPR after the arrest warrant was issued, Kenya’s inspector-general of police, David Kimaiyo, said that he was “not aware” of the May 14 court ruling. He said he had not had any communication with the DPP about the warrant.

“There is a normal procedure of [executing an arrest warrant],” Kimaiyo said. “If there is such communication from the court to the DPP, then the DPP will communicate it to us. I am not aware of anything.”

Asked whether the police would arrest Barasa if asked to do so, Kimaiyo said they would.

“All court orders in Kenya must be obeyed,” he said.

Responding to the ruling, lawyer Mungai said he had already filed a challenge with the Court of Appeal that pre-empted the May 14 decision. This challenge seeks a stay in proceedings until he lodges an appeal against a High Court decision in October last year on the procedure for issuing an arrest warrant, and until this appeal is heard. In this forthcoming appeal, Mungai will argue that the procedure set out under Kenya’s International Crimes Act is inconsistent with the  constitution.

Mungai’s submission to the Court of Appeal requested that the Kenyan authorities be prevented “from arresting and/or surrendering [Barasa] to the International Criminal Court pending the filing, hearing and determination of an intended appeal”.

Mungai has also filed a motion with the High Court seeking the disqualification of Justice Mwongo on the grounds that his impartiality and independence “have been irredeemably compromised”.

Mungai has previously told IWPR that there are many avenues for challenging the arrest warrant and any future extradition to The Hague. (See ICC Suspect Won't be Extradited Soon.)

He has also lodged a separate legal challenge arguing that the ICC cases against Kenyatta, Ruto and Sang are illegal, and that by extension, the Hague court’s arrest warrant against his client contravenes Kenyan national law.

Mungai was defiant after the May 14 ruling.

“We are very far from a full surrender,” he told IWPR. “An arrest warrant is not a surrender.”

[Correction: clarifying the nature of Mungai's forthcoming appeal, which forms the basis of his submission to the Court of Appeal.]

Bernard Momanyi is a reporter for ReportingKenya.net and News Editor at Capital FM in Nairobi. IWPR’s Africa Editor Simon Jennings also contributed to this report.