Critics say government needs to get tough on illegally-held weapons in tense areas ahead of March elections.

Critics say government needs to get tough on illegally-held weapons in tense areas ahead of March elections. 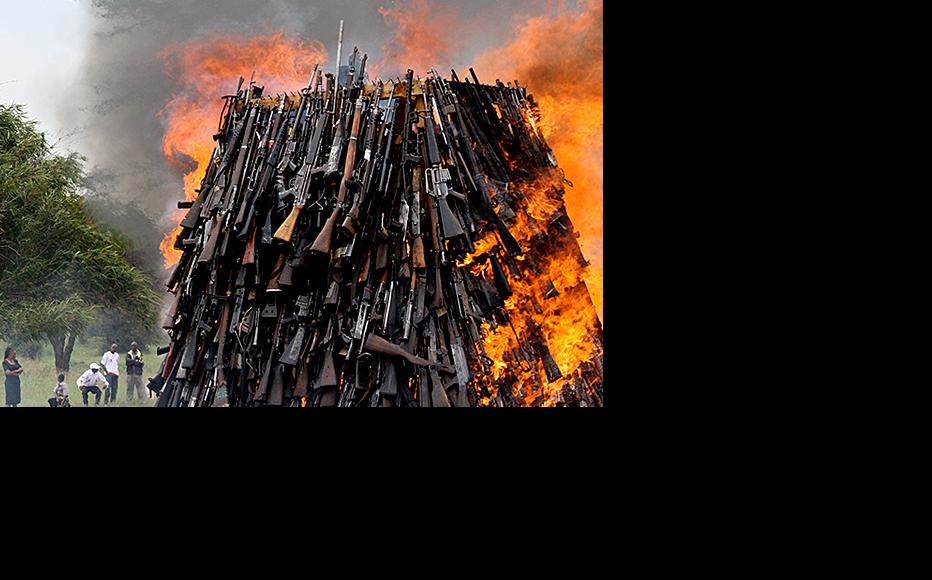 The Kenyan government conducts an annual disarmament programme alongside the National Focal Point on Small Arms and Light Weapons. (Photo: Capital FM)
The link has been copied

With less than a month to go until Kenya’s general election, analysts are warning that widespread illegal gun ownership presents real risks to security. Government efforts to disarm the population have been ineffective, they say.

The warnings come after a series of violent incidents, particularly between pastoral and farming communities fighting over water, grazing rights and other resources.

Clashes between the Orma and Pokomo groups in the Tana Delta region of Kenya’s Coast Province have left at least 140 dead. January saw the latest in a serious of attacks following bloodshed in December and August last year.

In the Rift Valley, recent violence in the area has claimed many lives, including those of 42 police officers shot dead by a armed raiders three months ago.

Rift Valley experienced some of the worst violence after fighting erupted over a disputed presidential election in December 2007, leaving more than 1,100 dead across Kenya.

Young men in the Nairobi slum area of Kibera are also reported to have been acquiring firearms, motivated by anger at alleged fraud during last month’s candidate nominations process.

In a worrying development given that the March 4 polls are so close, police say they have established that the Tana Delta violence was politically driven, and pointed the finger at local politicians, without naming names.

A 2012 study by the international monitoring group Small Arms Survey and the Kenya National Focus Point on Small Arms and Light Weapons indicated that between 530,000 and 680,000 firearms were held illegally across Kenya. While that was lower than the numbers recorded in a similar study ten years ago, the figures showed a rise in two provinces, Western and Rift Valley.

The Kenyan government conducts a disarmament drive on an annual basis, and since the August attacks in Tana Delta, it has carried out two such exercises there.

But observers say these efforts have achieved little, and guns are still freely available in Tana as well as other parts of the country.

“For all my life, I have never seen a successful disarmament exercise in this [Tana Delta] region,” said Dhadho Godhana, who represented Tana Delta’s Galole constituency before parliament was dissolved for the election campaign. “The government just promises to [conduct] disarmaments but they have never really taken the exercise seriously.”

The Kenya National Commission on Human Rights believes there are up to 2,000 illegally-held weapons in Tana Delta alone. Its acting chairperson, Anne Ngugi, worries that the arms could be used during the upcoming election period.

“The state has a responsibility of urgently mobilising its resources to do a serious disarmament exercise in affected areas before March 4,” she said. “The period left is too short and action needs to be taken now, not tomorrow.”

The 2012 arms report spoke of a need to “re-examine the effectiveness of government approaches to disarmament”. It ascribed escalating demand for arms in the Rift Valley to the government’s failure to provide “adequate security”, and to the particular vulnerability residents felt at election time.

Simiyu Werunga, who heads the African Centre for Security and Strategic Studies in Kenya said government disarmament programmes were less effective than they could be because communities would not feel secure if they surrendered their arms.

“It is the responsibility of the government to first put in place mechanisms on the ground that will guarantee the security of the locals before carrying out any disarmament exercise, because you don’t expect communities to give [away] their arms, yet they know there is not enough security,” he told IWPR.

This sense of insecurity is especially apparent when rival communities are in conflict.

“How can we give [away] arms, yet our neighbours are still armed?” asked Leke Yusuf, a member of the Orma group, following one fatal clash in Tana Delta. “If a disarmament exercise must be done, it should target all the people.”

Juma Hassan, from the Pokomo, called for an even-handed approach.

“The day the government will carry out a serious disarmament exercise here, there will be peace,” he said. “At the moment there is mistrust between both of us [Orma and Pokomo] because some people have arms, others don’t.”

The situation is similar in the Turkana district, an area in the far north of the Rift Valley where locals often clash over cattle.

“The government must take up the issue of disarmament seriously, particularly now that we are headed to a general election. Communities here [Samburu and Turkana] are still holding arms,” Ekwe Ethuro, a former member of parliament from the region, told IWPR. “We tried to talk about the issue in parliament, but no better action seems to be taken.”

The Kenyan authorities insist they are taking action to cut the number of weapons in civilian hands.

Immediately after his appointment in December, Kenya’s new inspector-general of police, David Kimaiyo, ordered a two-week amnesty under which Tana Delta residents could hand over weapons without fear of retribution.

“We are trying our best. Everything possible is being done to get arms from the wrong hands,” Kimaiyo said. “It is not something that can be done within a day.”

Patrick Bonyonte, the national human rights commission’s representative in Coast province, compiled a report on disarmament in Tana Delta, in which he said the December amnesty was not followed up by meaningful action.

Godhana is similarly unconvinced by measures like amnesties. He says people have their own ways of hanging onto their weapons.

“Whenever the police come for the guns, a few people just give up old ones which cannot even fire, and remain with newly-acquired ones,” he said. “The government is not using its intelligence mechanism well.”

Godhana would like to see the authorities carrying out disarmament by force.

“The government knows very well – they have enough information on who has arms and who does not have them. Since the voluntary exercise has failed, why can’t they use force?” he asked.

Ngugi, of the National Commission on Human Rights, disagrees, arguing that in the long term, the state needs to ensure that people feel protected, so that they do not feel they have to defend themselves.

“Inhumane and crude methods of collecting arms have failed,” she said. “The government should engage locals through the elders to convince them on the reason why the arms must be taken away.

“We are worried, because only about 100 firearms have been surrendered or collected in Tana River since August, yet we are talking of more than 2,000. It is a big joke, let alone [the situation in] the other parts of the country.”