Githu Muigai tells court that his government is cooperating fully with legal process. 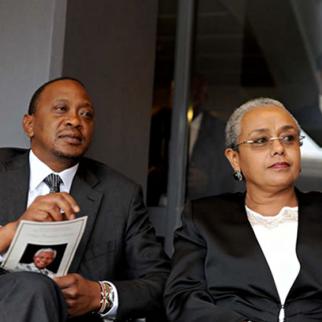 Kenya's President Uhuru Kenyatta and his wife, Margaret, at the memorial service for former President Nelson Mandela. Kenyatta's ICC case was scheduled to start on 5 February 2014, ICC Prosecutor Bensouda has asked for a delay of three months so she can look for more evidence. (Photo: GovernmentZA flic.kr/p/ifj4sE )

Prosecutor seeks trial delay so she can look for more evidence.

Githu Muigai tells court that his government is cooperating fully with legal process. Kenya's Attorney General Githu Muigai. (Photo: The Standard)
The link has been copied

Kenya’s attorney general has told judges in The Hague that only domestic courts can authorise the release of President Uhuru Kenyatta’s financial records, which are being sought by prosecutors from the International Criminal Court (ICC).

Githu Muigai said that Kenya’s Banking Act and Central Bank Act forbid the disclosure of an individual’s private records without their consent or without a court order issued by a judge. It was a matter to be “determined under domestic law”, he said.

ICC judges had called Muigai to The Hague to discuss allegations by the Office of the Prosecutor (OTP) that Nairobi had not met its obligation to cooperate with its investigations.

On November 29 last year, the OTP wrote to ICC judges asking them to make a finding of non-compliance against the Kenyan government after it failed to provide financial documents which prosecutors had requested as far back as April 2012.

Prosecutor Fatou Bensouda has also accused the Kenyan authorities of withholding telephone records and preventing her staff from interviewing police officers who they believe had information about the post-election bloodshed of 2007-08.

Kenyatta is charged with five counts of crimes against humanity for allegedly planning and financing attacks.

Prosecutors are trying to show that Kenyatta conducted large financial transactions around the time of the fighting.

“These records are relevant to critical issues in this case, and may shed light on the scope of the accused’s conduct, including the allegation that he financed the crimes with which he is charged,” the OTP submitted in November.

Kenyatta’s case is yet to start, and it has been delayed indefinitely while judges hear arguments on the issue of cooperation.

Deputy President William Ruto is currently on trial for similar alleged crimes, but in a separate case. The trial of Ruto and former broadcaster Joshua Arap Sang began in September.

Appearing in front of the three-judge bench on February 13, Muigai said that for a request for financial records to have any chance of success, it would need to be made by ICC judges. Since he had only received a request from the prosecution so far, he was not obliged to pursue the matter further.

However, he told judges that if the ICC issued a court order, he would then facilitate the legal process in Kenya.

“If I received an order from you, I would have to surrender it to the public prosecutor, who would then place it before the High Court which may grant the order or grant the accused a hearing, and even then President Kenyatta reserves the right of appeal,” Muigai said.

Asked by presiding Judge Kuniko Ozaki how long the process would take, the attorney general responded, “Will it take one month, six months, one year? I cannot speculate.”

Judge Ozaki asked Muigai whether the Kenyan government or the attorney general’s office had sought Kenyatta’s consent to provide the relevant documents.

Muigai said that this had not happened, “for very good reasons”. “The Republic of Kenya is a sovereign, autonomous, independent state, and it was my duty to keep a clear independent distance from the prosecution and the defence, and to have a direct engagement with the court,” he said.

Judges questioned Muigai on the extent to which the Kenyan government was obliged to cooperate with the prosecution, as opposed to the court more generally.

Judge Robert Fremr pointed out that the founding Rome Statute did not distinguish between the court’s different parts, including the OTP.

But Muigai argued that “the prosecutor is not the court” and said the term “court” as applied in different contexts in the Rome Statute had a range of meanings.

Muigai insisted that the Kenyan government had cooperated fully with the ICC.

“In the history of the ICC, I do not know of another attorney general who has come to this court in person… to say this is what we have done and this is why we have done it,” he said. “That, to us, is the ultimate example of cooperation,”

Muigai said that Nairobi had received over 40 requests from the OTP and complied with 36 of them.

“We urge you to make the finding that we have cooperated,” he said. “We gave everything that was not contentious.”

Judges also heard arguments from the attorney general during a separate hearing in the case against Ruto and Sang.

Muigai told a different bench, presided over by Judge Chile Eboue-Osuji, that the Kenyan authorities could not force witnesses to give evidence.

His assertion followed a request by the prosecution that judges ask Kenya to compel seven witnesses to testify before the court.

The witnesses in question have previously given statements to the OTP, but they have since refused to come to The Hague to testify.

Muigai explained that Kenya’s domestic laws, in particular the International Crimes Act under which the Rome Statute is applied, enable the government to serve witnesses with a summons but cannot force them to testify.

“These persons reserve the right to voluntarily comply with the summons or refuse to do so,” Muigai said.

The prosecution responded that it only required the Kenyan government’s assistance in facilitating the witness’s testimony via video-link from Kenya, and not their transfer to The Hague.

Muigai said that since the seven witnesses were under ICC protection measures, the Kenyan authorities did not know who they were.

He said the Kenyan authorities had no objections to the witnesses providing testimony in Nairobi, but were unable to force them to do so.