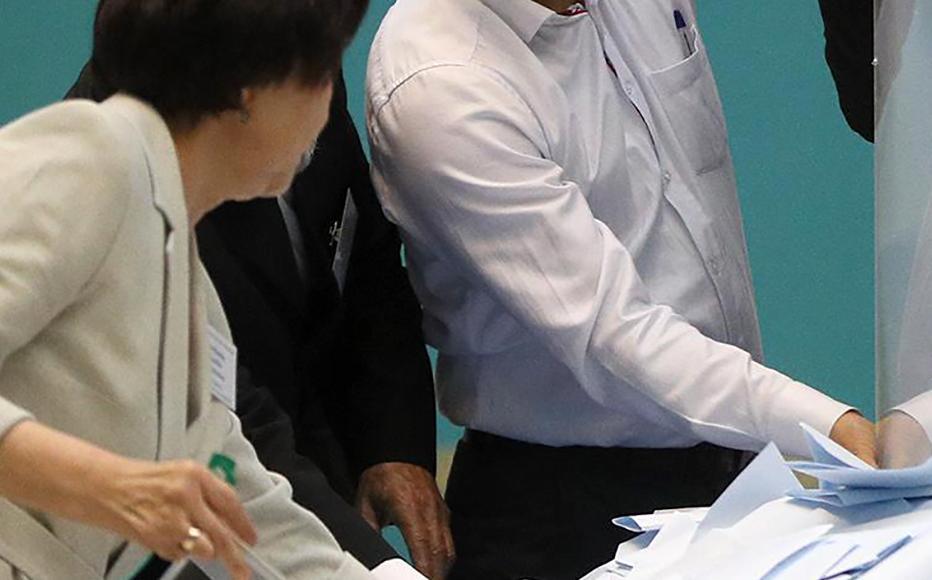 Members of the precinct election commission in Nur-Sultan are counting ballot papers during parliament elections held in Kazakstan at 10th January. (Photo: CABAR/IWPR)
The link has been copied

The ruling Nur Otan party has emerged as the predictable winner of Kazakstan’s parliamentary elections, which unfolded alongside increased harassment of activists and observers.

As the first elections to see a mandatory 30 per cent quota for women and youth in party lists, the January 10 polls were supposed to represent a level of reform. In addition, for the first time, elections to maslikhats (local representative bodies) were held according to party lists.

However, there were few surprises as out of the five parties running, the three that were already serving in the mazhilis - the lower house of parliament – won.

Nur Otan gained 72 per cent of the vote, the Ak Zhol Democratic Party took 10 per cent and the People’s Party of Kazakstan nine per cent.

Despite President Kassym-Jomart Tokayev’s statement that there were no repressive measures taken against dissent, the police detained dozens of protesters.

In Nur-Sultan, they were detained before they had a chance to demonstrate, but in Almaty the security forces surrounded activists in Novaya Square. The crowds, included representatives of the Oyan, Qazaqstan! movement and the unregistered Democratic Party, were cordoned off in freezing temperatures for almost seven hours.

There were also disruptions to mobile internet access in Almaty and other cities, which political scientist Dosym Satpayev could have been a misuse of security measures intended to fight terrorism.

“Now we see that this blocking is used during any protest, including protest against the elections,” he continued. “It turns out that the government uses this tool against dissent.”

In December 2020, the Central Election Commission (CEC) issued new regulations that effectively banned the independent observation of the elections.

Observers were forbidden to move around the polling stations or to stream video and photo online, and needed a negative coronavirus test certificate.

“I have been observing elections since 2004,” said Yelena Shvetsova, executive director of the Wings of Liberty Public Fund. “I thought that the [presidential] election last year was the toughest, but this year it is much more complicated, to be specific the observers’ treatment, limiting our rights by all sorts of methods. We see pressure from the state.”

Experts do not predict a wave of protests like those that followed the 2019 presidential elections. However, Satpayev predicted that the public’s dissatisfaction with their rulers would increase due to the Covid-19 crisis and general mismanagement.

“Last year, it became clear that not a single political institution created by the authorities in 30 years - the parliament, maslikhats, political parties, the Assembly of People - had shown its effectiveness,” he continued. “It was necessary to analyse it and conclude that the system was not operational. However, we keep making the same mistakes.”

Satpayev also stressed that the clear struggle between Tokayev and the old guard continued. One particularly visible sign of this was the re-entry of Dariga Nazarbayeva, Nazarbayev’s daughter, into politics after she was removed as senate Speaker in summer 2020.

“Most likely she was included in Nur Otan’s list because the first president was actively convinced that he needed to have his people in the parliament,” Satpayev continued. “There is a risk that a parliament controlled by Nur Otan may become the most conservative body to maintain the status quo. It turns out that the only thing Tokayev has are the 15 people in the Senate he can appoint [directly].”

After the 2019 presidential elections, Tokayev publicly promised to carry out reforms, protect civil liberties and introduce a “listening state” policy.

However, the media, NGOs and activists all report an increase in pressure and intimidation.

Satpayev said that the ongoing battle between the current and former powers made it impossible for Tokaev to institute real reforms, even if he had the political will.

“Tokayev will have to play a double game while Nazarbayev’s team [has power],” Satpayev continued. “Whatever reforms Tokayev proclaims, they cannot be carried out with the old bureaucrats, unelected akims and the old guard.”

Local elections were held along with parliamentary ones, and political scientist Andrey Chebotarev said that final results were likely to show a more diverse representation of political parties.

“Their experience in the last elections allows these parties to strengthen their positions in the regions and take an active part in forming regional agendas,” he said.

“Moreover, the intentions of the country’s leadership regarding the implementation of new reforms will have an impact at the regional level.”

While Satpayev agreed that more devolved powers would improve local governance, he said that the new party list system would not contribute to this end.

“Having controlled the maslikhats, the parliament and the authorities think that they are controlling the situation, but it is an illusion that can destroy them,” he continued. “A law on local self-government elected by the voters should be adopted in Kazakstan.”

Asel Sultan is an IWPR-trained journalist in Almaty.

Giving Voice, Driving Change - from the Borderland to the Steppes
Kazakstan
Elections
Connect with us