Kazakstan: Victims of Violence End Up In Jail

Kazakstan: Victims of Violence End Up In Jail 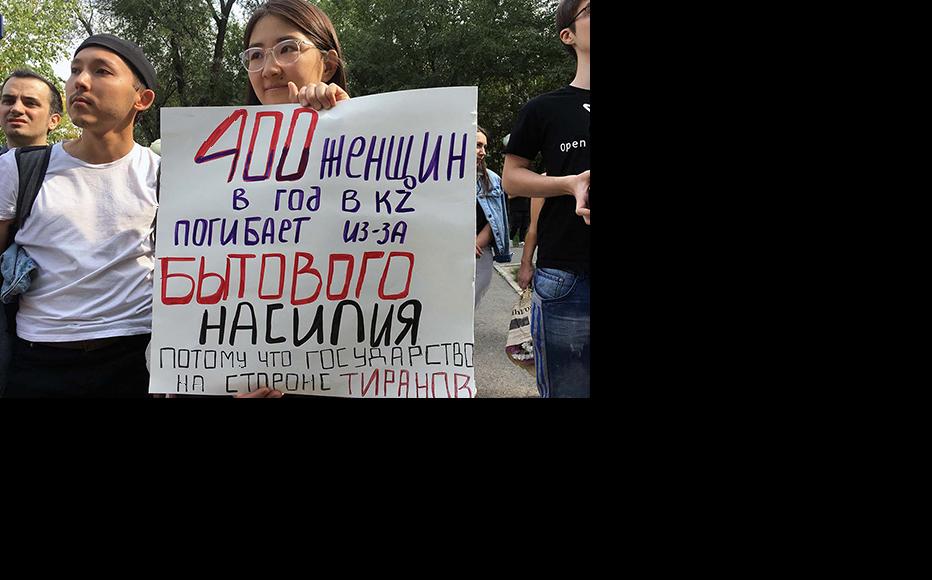 Peaceful gathering in Almaty of local feminist activists. (Photo: IWPR/CABAR)
The link has been copied

Campaigners in Kazakstan warn that the state is failing to adequately protect victims of domestic violence who attack or kill their abusers in self-defence.

They say that a combination of inadequate legislation, conservative values and lackadaisical police work mean that women are often unjustly punished with disproportionate jail terms.

According to the director of the Nemolchideti.kz public foundation, lawyer Almat Mukhamedzhanov, the vast majority of inmates in the Shymkent women’s prison were themselves victims of violence.

Very often, he explained, women who fight back against their abusers often face tough sentences. Perpetrators of violence against women, however, may receive much more lenient punishment.

“We had a case when a senior lieutenant, an officer beat his wife, an elementary school teacher, so that she had five skull fractures. He received a year of judicial restraint, while she is now registered disabled,” he said.

He said that police investigators had to meet a number of statistical requirements, for instance solving a certain number of murders per month. This meant that they were less interested in digging into the deeper reasons for the violence.

“In our reality, it turns out that it is more profitable for investigators to solve a grave crime such as ‘murder’ than to investigate thoroughly and clear up domestic dramas,” Mukhamedzhanov said.

The investigations were often only superficial, he continued.

“This is due to the fact that the investigating bodies, according to the code of criminal procedure, must investigate the crime scene. There are about 16 points they need to follow. They do not conduct full investigation, do not seize all the evidence. They come, take pictures and leave,” Mukhamedzhanov said.

The problem of violence against women in Kazakstan appears serious. The country’s first national study of domestic violence, carried out last year, revealed that almost one in six women aged 18-75 years old will experience physical or sexual abuse by a partner during their lifetime. In 2018, 115,285 cases of domestic violence against women were registered in Kazakstan.

The concept of self-defence is provided for in article 112 of Kazakstan’s criminal code. One example given is that a woman will not be criminally liable if she is attacked suddenly at night and fails to assess the risk objectively in her response, deeming it a threat to her life.

District court judge Gulzhakhan Ubasheva noted that only ten per cent of cases were women had fought back against their attackers ended up with a dismissal or acquittal.

“According to criminal law, the defender that fights back against their attacker should think in advance of whether they can do significant damage to the attacker,” she said. “It turns out that in defending their own life, a person can be brought to trial as the accused. The concept of excessive self-defence is not defined properly. It gives way to unlawful classification of a crime and rendering wrong decisions.”

A 2014 study by Penal Reform International (PRI) found that both Kazakstan and Kyrgyzstan had high convictions rates for women charged with homicide or involuntary manslaughter.

Mukhamedzhanov said that very often women who fought back after being driven to despair by constant violence were the ones who ended up being convicted.

“In practice, if he beats her and she goes to the police, he will spend 15 days in a cell. If she hits him with a frying pan or a rolling pin, she will be sentenced to a longer term. The investigation officers don’t carry out psychological assessment to find out why a woman did what she did,” he continued.

According to Asel Tokaeva, the lawyer of the Nur-Sultan Bar Association, cases where victims of violence kill their abuser in self-defence are registered as murder by default.

“To prove it was self-defence, evidence must be collected,” Tokaeva said. “A good assessment should be made to prove that a woman was regularly under pressure, psychologically and physically abused and that she was self-defending or acting in the heat of passion. We need to prove she didn’t want to kill, it was by accident.”

Tokaeva said penalties for domestic violence should be toughened in order to prevent the prosecution of women for murders as a result of self-defence.

“There are frequent cases when husbands beat their wives, pour gasoline over them, and then women go to police and withdraw their applications after a while. Women forgive rapists, abusers. If a man is sober, he’s good, when he drinks, he becomes an abuser. Women have nowhere to go. They just keep silent and put up with the situation. As a result, men beat or kill them. Or, a woman can kill accidentally,” the lawyer said.

There was little support for women in such situations, she continued, because of conservative tradition in Kazak society. Women were expected to put up with violence for the sake of their families and children.

In such circumstances, Tokaeva argued, a state policy of zero tolerance to domestic violence was essential.

“Whenever a woman calls the police and reports violence, the police should react properly,” Tokaeva said. “They should arrest the abuser and they should not allow her to withdraw her application to make the abuser fear the consequences. Impunity leads to systemic violence. We should register all domestic abusers.”

Giving Voice, Driving Change - from the Borderland to the Steppes
Kazakstan
Women's rights
Connect with us