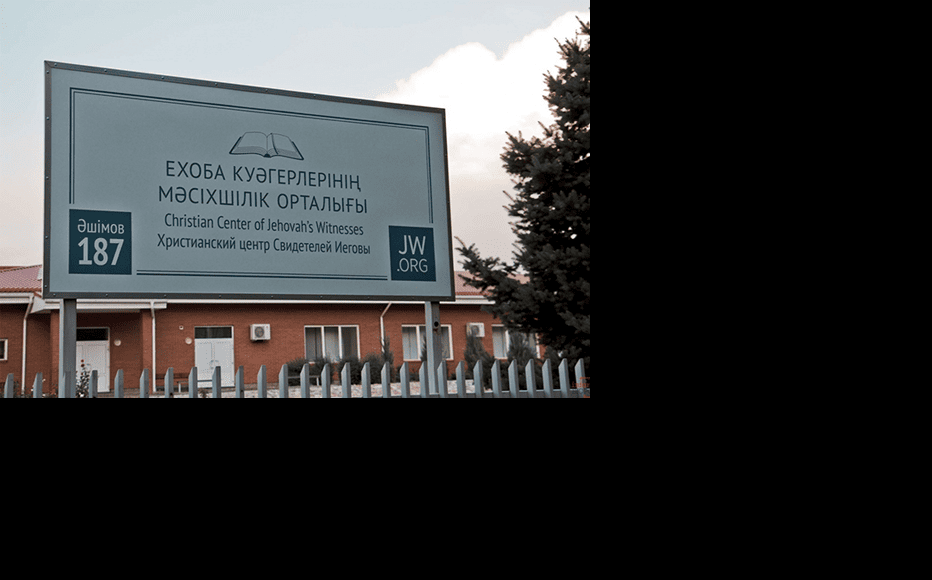 Christian centre of Jehovah's Witnesses in Almaty, Kazakstan. (Photo: informburo.kz)
The link has been copied

Members of non-traditional faith groups in Kazakstan are warning that growing state control is eroding their fundamental right to practice their religion.

Communities such as the Jehovah’s Witnesses say that they are already experiencing a concerted campaign of discrimination. Now, a draft law on religion risks further shrinking the space for minority groups to follow their beliefs.

The main religions in Kazakstan are Sunni Islam and Orthodox Christianity. Nearly 70 per cent of people describe themselves as Muslims, while 26 per cent say that they are Christian – although less than 17 per cent of both consider themselves to be practicing.

While the authorities show tolerance towards the country’s tiny Jewish, Catholic and Buddhist communities, other groups deemed to be “non-traditional” often complain of harassment.

Most penalties are imposed on Evangelical Christian Baptists, whose beliefs do not allow them to have any relations with the state, and on Jehovah’s Witnesses, whose activities are based on door-to-door preaching by community members.

For instance, according to the Jehovah’s Witnesses Christian Centre, 59 members were detained in Kazakstan between September 2017 and July 2018. Out of these, ten were called to account for talks they had given on religion, including in the privacy of their own homes.

In July, the Norway-based religion freedom NGO Forum 18 said that 79 administrative cases in had been initiated so far this year against religious minorities in Kazakstan, mostly involving Baptists.

In June, the Kazakstan International Bureau for Human Rights received six near-identical letters of complaint purporting to be from a number of individuals complaining about the activities of Jehovah’s Witnesses.

The Bureau’s head of information, Sergei Duvanov, said in a Facebook post that this was clearly part of an organised drive against the religious group.

“The campaign is evidenced by the texts of letters, which are almost copies of each other. It’s obvious that one text was given to different people who had to rewrite it and send it to our organisation,” he concluded.

A law on religion passed in 2011 banned non-registered religious communities from operating in Kazakstan - while simultaneously complicating the process of registration. Following its adoption, the country’s 4,551 religious associations dropped to 3,088.

The law also severely limited missionary activities, banning the distribution and sale of faith-related literature and holding ceremonies and meetings outside of religious buildings.

The situation has drawn international censure. Kazakstan was ranked in the second tier of countries where conditions for religious minorities arouse concerns in the US Department of State’s international religious freedom report for 2017.

The previous year, UN Special Rapporteur on freedom of religion or belief Heiner Bielefeldt visited Kazakstan and warned “non-registered communities must be able to operate free from discrimination and free from fear of intimidation.”

In November 2017, the ministry for social development, previously the ministry for religious and civil society affairs, introduced a new draft law that provides for 53 amendments and modifications to 12 legislative acts.

Most significantly, it introduces the legal terms of “religious radicalism” and “destructive religious movement” while leaving them vague and open to interpretation. It hands the ministry and local government more powers to monitor such associations and sets out administrative steps to censure those found to be “insulting the feelings and dignity of both believers and non-believers”.

In addition, the appointments of religious leaders of groups that have their headquarters abroad – such as Mormons or the Korean church - must be agreed with state officials. Only those above 16 years old may take part in religious ceremonies, meetings and trainings if they are unaccompanied by family members.

After approval by the lower chamber of the parliament, the draft law was sent to the Senate, which has to examine it by September 27 this year.

“The majority of amendments and modifications introduced are mainly based on requests and proposals made by the general public,” Yerkin Ongarbayev, the then-chairman of the Ministry’s Committee for religious affairs, said in a May 2018 interview with Zakon.kz. “Over 100 proposals were offered when we were working out the draft law, and 80 per cent of them were taken into account.”

However, others charge that many of these amendments threaten the activities of small and non-traditional communities.

Alexander Klyushev, chairman of the Religious Unions Association of Kazakstan, attended one of the first meetings with the drafters of law. He said that the law did not follow the stated purpose of tightening controls over “non-registered” religious associations.

“For example, over 50 per cent of the text of this draft law is intended to encourage unjustified control over the activities of registered religious associations by state bodies [and] local implementing bodies,” he said. “If this draft law is adopted, we predict an inevitable increase in the violations of human rights to religious freedom and freedom of opinion, especially in regional centres and villages. In this case, neither the state, nor the society will win.”

Some members of religious minorities have been fighting back through the courts. In July 2018, a court in Kokshetau, central Kazakstan, reversed a 2013 decision in which Jehovah’s Witness Andrei Korolev was fined more than 1,000 US dollars for public preaching that had been deemed “illegal missionary activities”.

On April 4, 2018, Kazakstan released Teimur Akhmedov, a Jehovah’s Witnesses convicted in 2016 of inciting religious discord during talks in private apartments with other members of the community.

Earlier, on October 9, 2017, Ykylas Kabduakasov, a Seventh-Day Adventist, was released after two years of imprisonment for similarly “inciting religious discord.”

However, these scattered victories have done little to assuage fears of non-traditional communities.

Bekzat Smagulov, a press officer at Kazakstan’s Jehovah’s Witnesses Christian Centre, noted that the movement had been banned in Russia last year. He said his co-religionists feared that  Kazakstan was heading the same way, describing “a wave of xenophobia, defamation, aggression and even persecutions” against them.

Andrei Grishin is a human rights activist and IWPR contributor in Almaty.