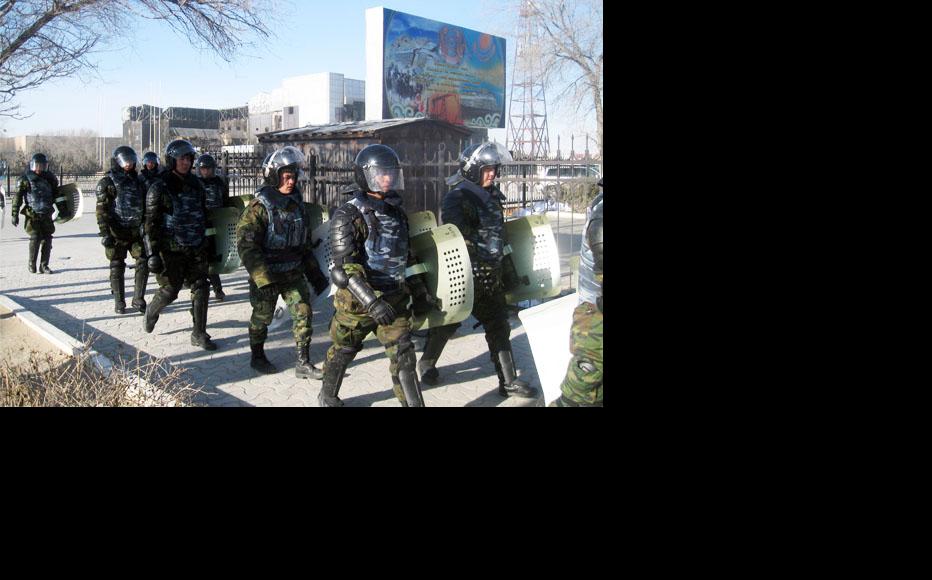 The plight of eight imprisoned oil workers in Kazakstan serves as a reminder how interconnected human rights and labour rights are, according to speakers at an event to mark the Janaozen shootings two years ago.

The 2011 violence was remembered at an event held in London on December 4, which included a screening of a documentary called Zhanaozen: the Unknown Tragedy.

On December 16, 2013, police fired live rounds at a crowd of demonstrators in the western town of Janaozen, after months of industrial action by oil workers. Sixteen people died.

Instead of looking at their own role in sanctioning excessive force and mismanaging the strike negotiations, the authorities portrayed the Janaozen violence as the result of an opposition plot, and proceeded to clamp down on opponents, dissidents and media.

In a trial last year, 14 people were jailed after being convicted of taken part in the Janaozen unrest. They received sentences of between three and six years, apart from Roza Tuletaeva, the only woman among them, who supporters say was penalised for being particularly outspoken during the industrial dispute.

In May 2013, the Supreme Court reviewed the convictions, and six of those convicted were released with two years’ probation. Tuletaeva’s sentence was cut to five years.

An online petition has been launched to press for further reductions in sentence for the eight who are still in prison. It is timed to coincide with Tuletaeva’s 47th birthday on December 10.

The London event was hosted by the London-based Solicitors’ International Human Rights Group. Sasha Zernova, coordinator of its working group for former Soviet states, told IWPR that since Tuletaeva has three children and is the sole bread winner in the household, “they could release her with a suspended sentence”.

Zernova said that based on the allegations of torture which Tuletaeva made in court, “We are in the process of submitting her case to the United Nations Committee for Human Rights in Geneva”.

The half-hour documentary (see here for a trailer)  includes footage of the bloodshed and looks at the trials that followed. The screening was followed by a panel discussion with Russian film-maker Yulia Mazurova, producer Denis Bilunov, British TV producer Tony Garnett and Russian trade union activist Kirill Buketov.

Organisers of the event are planning to hold two protests on December 10 and 16 at the British Foreign Office and the Kazak embassy in London. The first of these demonstrations is intended to highlight Britain’s role in forging ties with Kazakstan despite that country’s worsening human rights record.

IWPR interviewed Buketov, from the Moscow-based Centre for Protecting Trade Union Rights, who said that the Janaozen tragedy underscored how human rights and labour rights were intertwined.

“This began as a labour dispute that could have been resolved under employment law,” he said, recalling how the oil workers of western Kazakstan tried unsuccessfully to engage their employers and later the authorities in pay talks.

Buketov said that even afterwards the Kazak government showed no inclination to improve direct channels of communications in labour disputes, or to allow independent unions to operate.

“The trade union bill that’s currently being debated in parliament effectively means that unless they become part of the centralised system of trade unions, none of these independent groups will be able to enjoy legal status,” Buketov said.

These strictures, he said, only increased the risk of similar confrontations over labour rights.

Mazurova told IWPR of her motivation for making the film, which was initially sparked by raw video footage of the police shootings

“The story simply touched me and I think it needs to be told,” she said. “I just wanted to help people in Janaozen… the way I can, by making a film, so that as many people as possible know about it.”

Mazurova said the Kazak government suppressed discussion of Janaozen in the hope people would forget about it. Because of this, she did not try to get the film screened in Kazakstan or in Russia, where authorities have backed the official Kazak position.

She was, however, disappointed in the lack of interest elsewhere, which she put down to a mix of the limited media coverage Kazakstan gets, Western engagement with this oil-rich state, and the attention paid to high-profile cases like the three Pussy Riot members jailed in Russia.

In spite of this, interest in the film was building – it had been shown in the Ukrainian capital and was now to be screened at a film festival in Geneva.”

Zernova said Kazakstan’s government was image-conscious enough to care what the international community thought about its actions.

“If there is international pressure and criticism from the West, then the Kazak government will respond, unlike the Russian authorities,” Mazurova said.

As an example, she noted how a letter-writing campaign had prompted the Kazak authorities to move jailed dissident Aron Atabek from solitary confinement in a high-security prison to another facility.

Atabek is currently serving an 18-year sentence for organising protests against the demolition of a slum area called Shanyrak in 2007. Last November, he was sentenced to two years in solitary confinement for writing The Heart of Eurasia, which is critical of President Nazarbaev, while serving his sentence.

“They seemed to have realised it would be better to end his solitary confinement since the international community was keeping a watchful eye on them and they needed to do something,” Zernova said.

Buketov said the story of Janaozen was also an uplifting example for labour movements in other former Soviet countries.

“After the collapse of the Soviet Union, the prevailing view was that… the working class was isolated and did not have the capacity to self-organise,” he said. The Janaozen oil workers, he said, “made their mark”.

“This is a chapter that can’t be taken out of the history books, regardless how much the authorities would like that to happen,” he said.