Although the media is protected by law, beatings and illegal detentions are common.

Although the media is protected by law, beatings and illegal detentions are common. 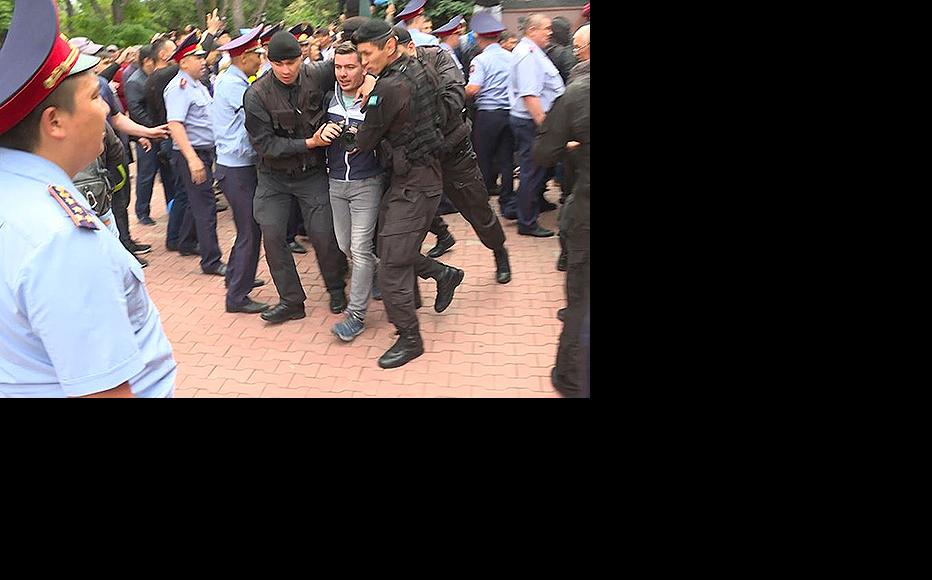 Detention of journalist in one of the protests in Almaty city. (Photo: RFE/RL's Kazak service)
The link has been copied

A recent incident of alleged police violence against a well-known Kazak journalist has highlighted how law enforcement officers continue to harass media workers with apparent impunity.

On October 24, Saniya Toiken - a journalist with the Kazak service of Radio Liberty – was covering a rally in the capital Nur Sultan when a police officer seized her phone before striking her to the ground and dragging her to a patrol car. After several hours in custody, she was released, bruised and in pain.

Toiken said that she had routinely experienced such brutality in the course of her work, and had even previously been fined for supposedly disobeying the orders of police officers. This time, she decided to file a formal complaint.

“At first, I was not going to submit any application as such things happened to me frequently. But this time I am daring to do this,” Toiken said to IWPR.

Media professionals in Kazakstan note that journalists who cover protests and rallies are frequently illegally detained and beaten. There has only been one prosecution in the last two decades, even though obstructing “the legitimate professional activities of journalists” is an offence under article 158 of the criminal code and liable to a fine and up to two years in prison.

Gulmira Birzhanova, a lawyer for the Nur-Sultan-based Legal Media Centre, said that action was long overdue.

“We say that it’s time to create precedents,” she said, adding, “Now they [police officers] pretend such reports [of abuse] are not related to professional journalism. In my opinion, this is not true.”

When President Kassym-Zhomart Tokayev came to power in 2019, there were hopes he would move towards democratisation and respect for civil liberties in the media sphere as elsewhere.

Despite some positive developments, including the de-criminalisation of defamation, the situation has not been much improved. Freedom House awarded Kazakstan 23 points out of 100 in its most recent rankings and considers it to be “not free”.

In the 2019 Reporters Without Borders survey, Kazakstan came 158 out of 180, a position little changed over the last decade.

New legislation concerning the media sphere has tended to focus on the sector’s responsibilities rather than protecting their rights.

The accreditation of journalists for covering state events is under discussion, and in August 2020, the ministry of information and public development issued guidelines for journalists covering rallies. These include the recommendation to wear blue vests featuring the word “Press”, as well as an armband and sticker identifying themselves as media workers.

However, even those following the guidelines find themselves under attack.

Khadisha Akayeva, a journalist based in Semei in eastern Kazakstan, described how she had gone to cover an unauthorised protest on September 25. She was wearing a blue vest as well as an armband, but was nonetheless abused by police.

“I had scratches on my arms and broke a nail,” she said. “I was dragged into the police van and they pulled out some of my hair. It was not only me, but also another blogger who was detained.

“We asked them to register the case, but a police officer said we had not detained - but they did not let us go. They wanted us to write a statement, but we refused and wanted them to provide us the official document of detention. But it did not happen,” Akayeva said.

She and the blogger were later freed, but these experiences have an impact on media workers and their ability to carry out their jobs.

“There are events in Kazakstan that no one wants to cover, and people begin to think they do not exist,” Birzhanova said. “Protests and peaceful gatherings will not be covered on national channels, on major websites.  They are covered only by a couple of agencies. This is very bad.”

Tamara Kaleyeva, president of the Adil Soz International Freedom of Speech Foundation, said the key problem was the impunity with which officials were allowed to act when they obstruct journalist’s work.

“We have been monitoring the situation since 2000 and only one case was initiated under article 158 of the criminal code of Kazakstan in 20 years,” she said. “It happened back in 2005 and this media outlet does not exist now. Can you imagine that no case was brought under this article in 15 years? However, journalists are being detained, their equipment is being damaged, they were even beaten. Last year, there were eight attacks and 29 journalists were detained during their work… not one case was brought to trial.”

Experts note that this situation has been exacerbated by poor organisation within the journalism community, with further divisions between state, private, urban and provincial outlets and a lack of support from within media offices. Private media is also dependant on government grants.

Even the October 24 attack on Toiken was only reported by Radio Azattyk two days later, after international media organisations – including the New York-based Committee to Protect Journalists - had already issued statements of protest.

Kaleyeva said that the sector needed to lobby harder for change and accountability.

“This is a matter of professional solidarity, professional ethics,” she said. “For some reason, when a lawyer is attacked, lawyers ally against the attacker, so do judges, but this rule does not apply to journalists. We are united only in appeals, but not in practice.”

Giving Voice, Driving Change - from the Borderland to the Steppes
Kazakstan
Police, Journalism, Safety
Connect with us