The four-day April war has severely strained relations between the two countries.

The four-day April war has severely strained relations between the two countries. 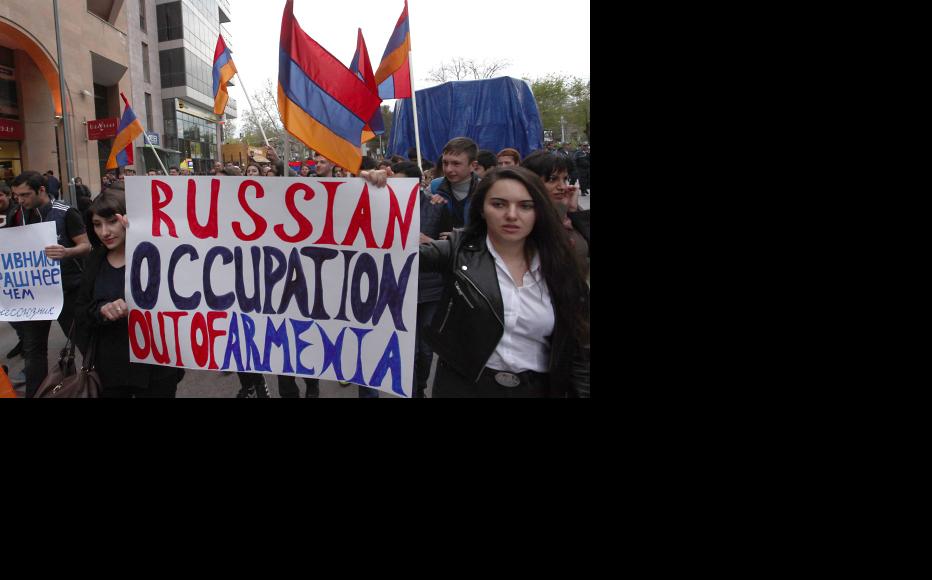 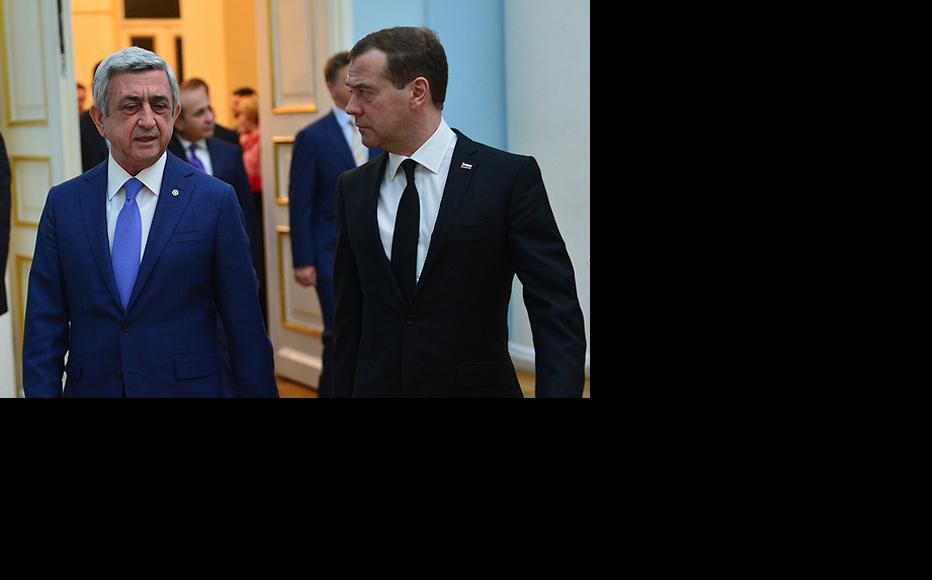 The aftermath of intense fighting around Nagorny Karabakh has seen unprecedented Armenian criticism of Yerevan and Moscow’s long-time strategic relationship.

Senior government officials and the wider public alike have expressed disquiet over Russia’s worth as an ally following the clashes between Azerbaijani and Armenia-backed Karabakh forces between April 2 to 5.

Russia sells weapons to both Armenia and Azerbaijan, which have been at loggerheads over Nagorny Karabakh for more than two decades.

War in the early 1990s left a local Armenian administration in control of Nagorny Karabakh, an enclave of about 150,000 people inside Azerbaijan.  Around 30,000 people died before a ceasefire was agreed in 1994, which has since been repeatedly broken.

But the surge of violence this month was unprecedented, leaving 92 people dead, most of them soldiers, and dozens injured.

According to the Armenian and Nagorny Karabakh ministries of defence, Russian weapons were used by Azerbaijan during the four-day war. This goes against assurances previously given by Moscow to their Armenian allies.

The Russians have neither confirmed nor denied such accusations.

A trade and transport blockade by neighbouring Turkey and Azerbaijan has long left Armenia isolated in the region.

This means that a strong alliance with Russia has always been seen as vital for Armenia’s security and economic interests.

Armenia is a member of the Collective Security Treaty Organization (CSTO) a regional post-Soviet military alliance, and it joined the Moscow-led Eurasian Economic Union (EEU) in January 2015.

Now experts, civil society activists and opposition politicians have openly declared relations between the two allies to be in crisis.

On April 13, hundreds of demonstrators protested against Russian weapon sales to Azerbaijan in the capital Yerevan.  During the march, participants picketed the Russian Embassy and eggs were thrown at the building.

One banner held up by protesters read, “There is no worse enemy than a phony ally.”

“We demand that Armenia leaves non-performing organisations, such as the CSTO and the EEU,” David Sanasaryan, a member of the Heritage Party and one of the protest organisers told the assembled crowds.

“When Armenia joined the Eurasian Economic Union, they were trying to convince us that everything was being done for the sake of security,” he continued. “And where is the security?  How did the allies of the CSTO behave when Baku unleashed military actions against Nagorny Karabakh? Why did the allies not even make statements condemning Baku?”

Media expert Samvel Martirosyan said that the event demonstrated how much Russia had alienated the Armenian public.

“Only five to seven years ago, it would have been unthinkable that such a protest against Russia could be held in Yerevan.  Now hundreds of people are taking to the streets.  Russia should draw the appropriate conclusions from this,” he told IWPR.

Richard Giragosian, director of the Centre for Regional Studies, agreed that relations between Armenia and Russia were heading for a very dark place.

“If we look at the Armenian-Russian strategic marriage, it´s now a case of domestic violence in this marriage,” he said.

Meeting Russia´s prime minister Dmitry Medvedev on April 7 in Yerevan, Sargsyan expressed dissatisfaction that Russia had supplied Azerbaijan with weapons that were used against Armenian soldiers and civilians.

The press secretary of Armenia´s defence ministry, Artsrun Hovhannisyan, went further, arguing that after the most recent outbreak of violence, “the sale of weapons to Azerbaijan is immoral”.

Lawmakers are also weighing into the debate. Khachatur Kokobelyan, chairman of the opposition Free Democrats Party, submitted a draft resolution calling for Armenia’s EEU membership to be terminated.

Kokobelyan was one of seven deputies who had previously voted against Armenia joining the EEU.

“After joining this organization, Armenia has faced greater problems, for example, in its relations with the EU, than it has received dividends.  I am confident that we do not need this organization.  After leaving it, Armenia will have alternatives,” Kokobelyan said.

Eduard Sharmazanov, vice speaker of Armenia´s parliament from the ruling Republican Party, cautioned against such an extreme response.

While domestic alarm over Russia’s actions was understandable, he warned that abrupt moves were not appropriate “because the alternative to the CSTO, or rather the alternative to Russia in the region, is Turkey,” said Sharmazanov.

Turkey is a staunch supporter of Azerbaijan and a long time foe of Armenia. Recognition of the Armenian genocide in Ottoman Turkey remains a sticking point in relations.

Despite the public disquiet in Armenia, Moscow has made it clear that it will continue to deliver weapons to Azerbaijan.

Russian was ensuring parity by supplying weapons to both countries, Russian deputy prime minister Dmitry Rogozin told the independent radio station Ekho Moskvy. This served as a deterrent to keep the conflict from escalating.

Should Russia end its arms supplies, other countries would begin selling offensive weapons, he said.

“Armenia is our ally in the CSTO and we have a military-technical cooperation.  Azerbaijan is not our ally, but a strategic partner in the region, with whom we have many economic ties.  It has a huge diaspora in Russia.  And they pay for Russian weapons,” Rogozin said.

“It is not weapons that shoot, it is people who shoot,” Rogozin said.

“Let us imagine we are scrapping the military technical cooperation with one of the sides.  The Americans and NATO will get here instantly,” he said.

Concerns over arms sales were first raised in 2010 when Russian media reported a Moscow-Baku deal worth billions of dollars.

In 2013, Azerbaijan´s President Ilham Aliyev stated publicly after meeting Russian president Vladimir Putin that its arms trade with Russia was worth four billion US dollars.

Also in 2010, Moscow and Yerevan signed an agreement extending the deployment of the Russian military base in Armenia´s second largest city Gyumri from 2020 until 2044. Moscow committed itself to providing Armenian armed forces with modern weapons.

At the time, Russian politicians assured Armenia that the supply of advanced weapons to Azerbaijan would not be used in hostilities in Karabakh.

The head of the Yerevan Press Club, Boris Navasardian, argued that Armenia could do more to exert leverage over Russia.

“Armenia is Russia´s only ally in the region.  In addition, Armenia is the only country with a Russian military base.  It is in Russia´s interest to have a base here because it is the only factor of a military-political presence of Moscow in the South Caucasus” Navasardian told IWPR.

“In this regard, the presence of a Russian base in Armenia has its price.  This price may not have a monetary value, but an explicit guarantee of arms parity with Azerbaijan.  This security guarantee should also apply to Karabakh.  The statement of the Russian authorities that they have no relation to Karabakh is not acceptable.  This question should be posed concretely to Russia,” he concluded.

Navasardian did not share the view that Armenia should leave the CSTO.  “For a country like Armenia, which has security problems, being in a military-political bloc is simply a necessity,” he said.

Alexander Iskandarian, director of the Caucasus Institute, also said that Armenia needed to be more pragmatic, as Moscow always had and always would supply weapons to Azerbaijan.

“Moscow supplies arms to Azerbaijan, Armenia and other countries of the former USSR.  This is Russia´s mode of behaviour.  It sells weapons to the majority of the post-Soviet countries.  After all, the delivery of weapons is a tool of influence Russia has over these countries,” he said.

Sergei Markedonov, from the Russian International Affairs Council, emphasised that Russia did not want tensions to escalate.

“If the status quo does not break down, Russia will behave calmly,” Markedonov told IWPR, adding that Russia will try to maintain a balance between Yerevan and Baku as long as possible.

“Although these countries are on hostile terms, they are both important for Russia,” Markedonov said.  “Because of this, Moscow will try to avoid a hard choice.”