A Journey via Aleppo's "Death Crossing"

Snipers daily risk to civilians getting from one side of the city to the other.

A Journey via Aleppo's "Death Crossing"

Snipers daily risk to civilians getting from one side of the city to the other. 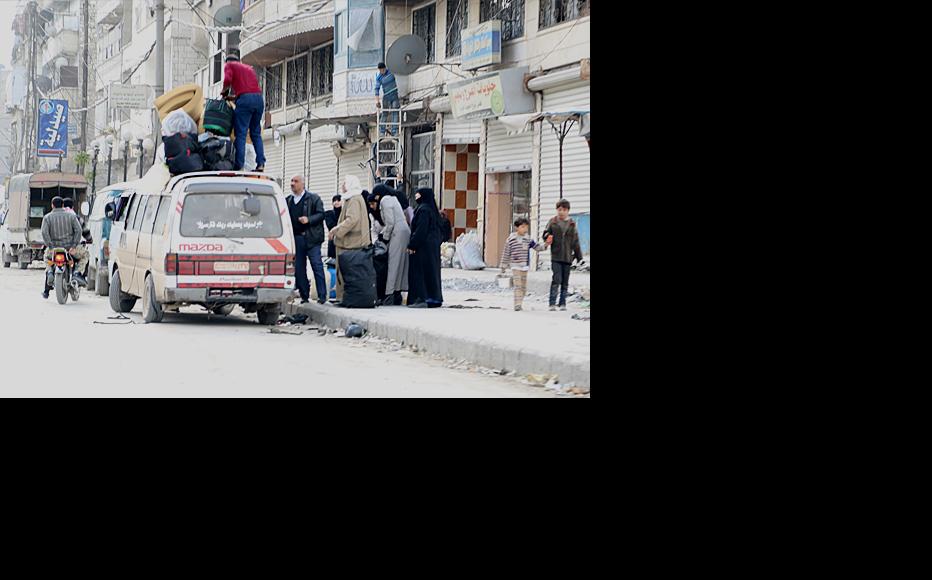 A displaced family from Aleppo’s al-Fardous neighbourhood. (Photo: Hussam Kuwaifatiyeh)
The link has been copied

Bustan al-Qasr was the last area of Aleppo with a direct link between government- and opposition-held neighbourhoods.

City residents called it the “Crossing of Death”, as people were often killed by government snipers while crossing from one side to the other.

Despite the risks, people used the route on a daily basis to get medical treatment, visit relatives, buy food, and go to work.

On January 28, 2014, my mother, sister and I crossed at Bustan al-Qasr to visit my grandmother, who lived in a government-controlled neighbourhood. Our intention was to stay with her for three days, but we were forced to stay for just over a month as skirmishes intensified close to our home.

Towards the beginning of March, we felt it was time to leave my grandmother. We could no longer bear the deteriorating social conditions, security situation and morale in government-held areas.

On March 6, we packed our belongings and headed back towards Bustan al-Qasr. It was to be the last time we would cross it. The opposition sealed it off on April 28 to prevent goods reaching government areas.

The last government-held neighborhood we passed through was al-Jamiliya, the location of the Baath party headquarters, the municipal offices, the military police, and the Northern Syria Military Command.

We then reached al-Masharqa neighbourhood, the start of the crossing-point. First up was a government checkpoint manned by several young male and female recruits.

We joined the long line of waiting people, who were separated into two groups, men and women. The soldiers checked our IDs to make sure none of us were deemed to be members of “terrorist” groups. The men were treated more harshly than the women, and were showered with insults and humiliations.

Soon enough, a soldier called out our names along with those of 12 other people. It was our turn to be searched. A female shabiha [pro-regime paramilitary] carried out the search. Once she was sure we weren’t carrying any “terrorist” material, we were allowed to pass.

The walk from one side of Bustan al-Qasr to the other was the longest ten minutes of my life. I was overcome by fear, knowing that we might not live to see the other side. My mother had warned me over and over that if she was shot, my sister and I should just leave her and run. In turn, I had told her to do the same.

We walked down the empty streets, trembling. My lips moved in silent prayer, my five senses alert to everything happening around me.

I saw a large pool of blood in the middle of the road. The sight terrified me. I wasn’t used to seeing people’s blood on the streets.

My heart was racing. Everywhere I looked I saw fear etched onto people’s faces. Some of the men, women and children were so traumatised they were crying.

As we approached the end of the crossing, we heard gunfire. A sniper from the government army was shooting at us. We all ran and didn’t stop until we reached the Free Syrian Army checkpoint. This marked the entry to opposition-held areas, and to safety.

My brother was waiting for us at the checkpoint. We had been separated for a month so we were overjoyed to be reunited. We had made it to other side alive and well.

When I started out on that ten-minute journey across Bustan al-Qasr, I knew there was a good chance I wouldn’t make it home. Many people had been killed there. Death didn’t differentiate between young and old.

I later learned that the pool of blood I had seen came from an elderly man, who had been shot by a sniper. I wonder whether the sniper mistook him for a terrorist.

Tasnim Zein is the pseudonym of a Damascus Bureau contributor in Aleppo, Syria.