They say the politicisation of the country’s press is undermining independent journalism.

They say the politicisation of the country’s press is undermining independent journalism. 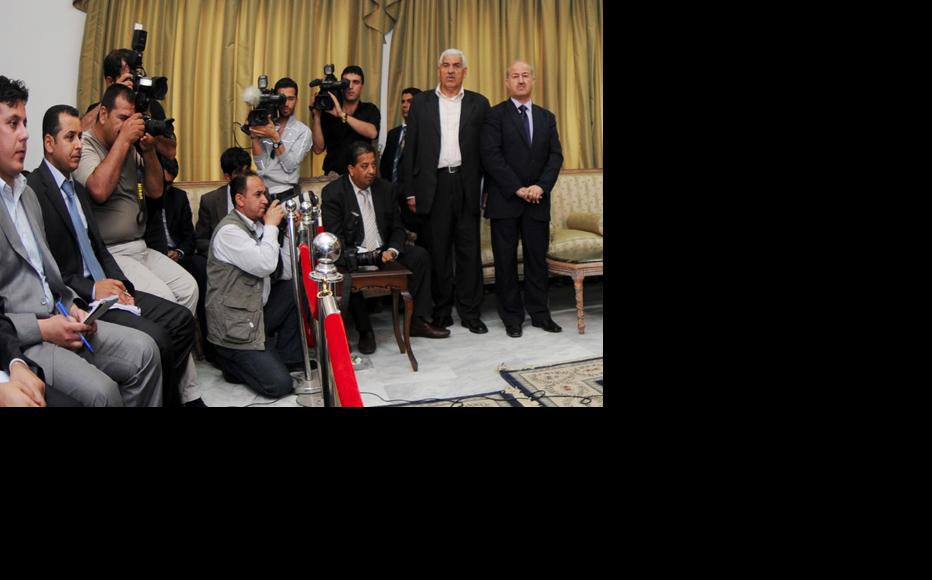 Iraqi journalists cover a government press conference during the run-up to national election in March. (Photo: Kamaran Najm/Metrography)
The link has been copied

Journalists are warning that the increasingly partisan nature of the Iraqi press is suppressing fair and impartial media coverage of politics.

They say that as politicians come to understand the power of the media, they have sought to control it, thwarting balanced, professional journalism.

"There is no independent media outlet in Iraq. I cannot name any satellite channel or a newspaper and say, ‘This one is independent.’ They all either belong to a political or religious party," said Hadi Jalo Marei, chairman of the Journalistic Freedom Observatory, JFO, a Baghdad-based media rights watchdog and an IWPR partner.

With political disputes often played out in competing partisan media outlets, local reporters and editors say their respective organisations impose strict rules about coverage, with no regard for journalists' ethical commitment to impartiality.

As most domestic news agencies are linked to or funded by political parties, observers say that a culture exists in which media aligned with a certain group provides positive coverage of their leaders while criticising opponents.

Journalists say the problem was particularly acute during this year’s election campaign and the months of negotiations that followed.

“Each news organisation, except some [international] ones, supports a particular party or politician," said Ali Ramadan, a TV correspondent from the al-Rasheed satellite channel, a local media veteran.

"The performance of the local media in Iraq [during and after the March 7 elections] shows that the press is no more than a tool used by Iraqi political parties to get the posts they want. Many outlets were broadcasting or publishing rumours on behalf of their political supporters."

Wisam, a cameraman who only gave his first name for fear of losing his job, said that although a free press is guaranteed in the Iraqi constitution, this doesn’t mean that the principle is put into practice.

"It should be the people's voices in local media that hold politicians accountable and correct the political process, but what we are seeing here [in Iraq] is that the media is the voice of political parties and a tool to deceive the people," Wisam said.

Some journalists say the job market and financial problems dictate that they must adhere to the specific types of coverage required by their employer.

"When I get my salary from any man, I will not be able to say he is wrong," said Israa Ali, a local radio reporter in Baghdad.

An Iraqi reporter who refused to provide his name or the name of his organisation explained the details of how policy is set at his office.

"Our editor used to force us to do stories against specific political parties,” he said. “When I was doing a story he would order me to interview people who blamed that party and not to publish opinions of those who support it."

Other Iraqi journalists strive to maintain their objectivity, despite the political circumstances that dictate what and how they report on events.

"Even though I am working in an organisation that is not politically independent, I am doing my best not to be biased to any political party," said Nesreen Ali, a television correspondent who works for the al-Furat satellite channel financed by Shia party the Islamic Supreme Council of Iraq, ISCI.

"If I'm doing my job in a professional way, just telling news, then I won't make my organisation or others upset. This is how to be balanced between the party that supports my company and other political parties.”

New York Times reporter Khalid Ali says the politicisation of the media stems from politicians increasing understanding of the influence it can wield.

"[Politicians] care about media now, because they have now seen the media's power. They have learned from the previous elections that media is their only way to reach the community, and is their only key to winning people's hearts," Ali said.

But politicians will only tend to cooperate with media they know will support or sympathise with them.

"It's as simple as some politicians being nice with their media outlets and rude with others," Ali of al-Furat said. “It can be hard to get the information you need. Members of a particular party, which I would not like to name, refused to talk to me or to my outlet at a time they had a disagreement with the party supporting my organisation.

"I blame the journalists who practice biased reporting. If all journalists were unbiased, then politicians will learn to treat them equally."

Hiba al-Sudani, who works as a correspondent for the state-run Republic of Iraq radio, believes media still has the power to affect change and inform the public.

"A journalist is stronger than a politician,” Sudani said. “If we work in a professional way, we will force officials to obey our rules, and we will no longer have to play by theirs."