Panel discusses whether court can meet the challenges of putting Kenya’s president on trial.

Panel discusses whether court can meet the challenges of putting Kenya’s president on trial. 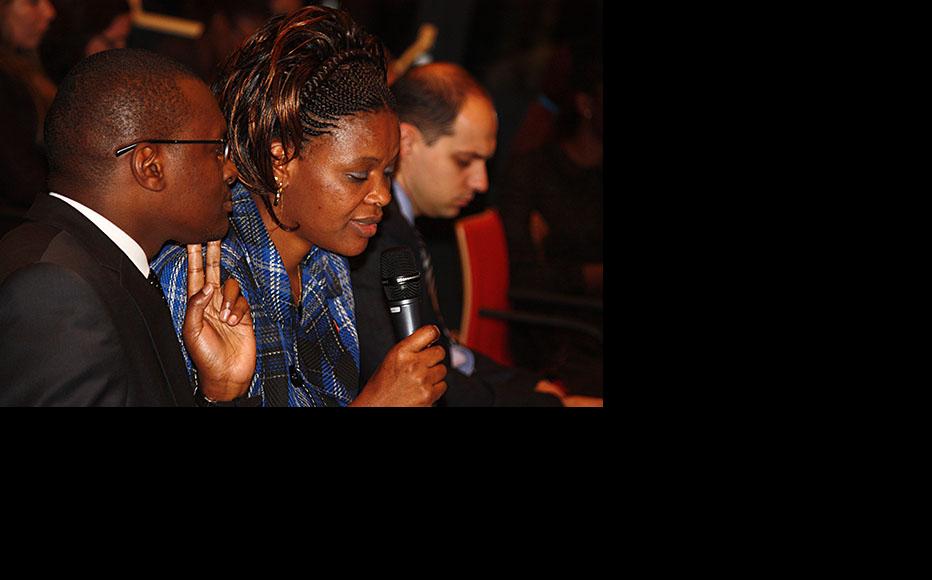 Audience members participate in IWPR/Wayamo ReportingKenya international panel discussion in The Hague featuring a range of opinions on the future of the International Criminal Court. (Photo: Kioko wa Kiwandi)
The link has been copied

As the Kenyan government steps up efforts to shield President Uhuru Kenyatta from trial in The Hague, an IWPR event debated the implications for the International Criminal Court (ICC) of prosecuting a sitting head of state.

The public debate was the fifth in a series of events held in Nairobi and The Hague in partnership with the Wayamo Communication Foundation.

President Kenyatta and Deputy President William Ruto are the first sitting state officials to be brought before the ICC. With a third suspect, Joshua Arap Sang, they are charged with orchestrating the violence that erupted in the aftermath of a disputed presidential election in December 2007.

The Hague discussion took place during the annual meeting of the Assembly of States Parties (ASP), which brings together the countries that are signatories to the ICC’s founding treaty, the Rome Statute.

The ASP meeting came just days after the United Nations Security Council rejected a request by Kenya, backed by the African Union, to postpone the trials of its leaders on the grounds that this would threaten security in the Horn of Africa.

During the week-long ASP meeting, a separate discussion was held at the Kenya government’s request on the issue of indictments against heads of state and government, and the effect on peace and security. The Kenyans argued that a sitting head of state should be immune from prosecution while in office and that putting their president on trial in The Hague would threaten security in the country and the wider region.

During the ASP meeting, states agreed to make changes to the rules governing ICC trials so as to allow judges to permit defendants “in highest national office” to absent themselves from proceedings.

The change could mean that Kenyatta will be given permission to remain in Nairobi rather than be present in The Hague throughout his trial, which is due to start on February 5, 2014.

IWPR’s debate, Sitting Heads of State on Trial: A Leap Forward for The ICC or the Beginning of The End, focused on how the court should deal with pressure from Kenya and the African Union and whether it was robust enough as an institution to deal with such cases.

Panellist Njonjo Mue, of the International Commission of Jurists in Kenya, said the ICC had to uphold the law in order to maintain its credibility.

“If the ICC stands steadfast on principle and doesn’t allow itself to be threatened or bullied by organisations such as the African Union or states that have their leadership under trial, [and] if the ICC stands steadfast in applying the law, then [Kenyatta’s trial] will be a leap forward [for the court],” Mue said. “If, on the other hand, the court allows itself to cave into political pressure, whether coming from the African Union or a particular country, or the ASP or even the UN, then it is going to be the beginning of the end.”

Kenyatta and Ruto were charged by the ICC in December 2010. The court did not issue arrest warrants but asked the suspects to appear voluntarily before its judges whenever requested to do so.

Kenyatta and Ruto were free to run for election in Kenya and were voted president and deputy president in March 2013.

Both defendants have asked judges to allow them to miss proceedings in The Hague in order to attend to official state duties back home.

Judges in both cases have ruled that absence can be granted under “exceptional circumstances”, a ruling which some see as bowing to pressure from the defendants.

Ambassador Gerald Thompson, representing the foreign ministry of Trinidad and Tobago, told the debate that this was an example where the court was responding to a unique situation.

“This is the first time a head of state has submitted himself to the court and the court has to deal with that,” Thompson said. “The fact that it has engendered debate and it has caused changes to be made to the rules of procedure, in itself, I think, is a reflection of the dynamic nature of the situation… [The ICC] has dealt with that situation.”

Questions have been raised about whether Kenyatta will attend his trial when it starts in February, and what the court would be able to do in the event he decided to stay away. The court does not have a police force and relies on states themselves to enact arrests, which would seem unlikely in this case.

ICC prosecutor Fatou Bensouda has repeatedly spoken of “unprecedented levels” of witness interference in the Kenyan cases, and a former journalist has been charged with bribing witnesses.

David Donat Cattin of Parliamentarians for Global Action told the debate that the court had “probably got it wrong” by not arresting the suspects when they were charged.

“Can you really expect an individual to come forward voluntarily and defend himself… if the charges are so serious?” Donat Cattin said. “If I am accused of a single murder, am I allowed to walk free and fly back home every week? You are presumed innocent but you can defend yourself in all ways. You are constrained either under house arrest or as a detained person.”

Donat Cattin said it was natural there should be a backlash to the first trial of a sitting head of state, but that was not necessarily a bad thing.

“Resistance is part of the game,” Donat Cattin said. “If you create a court that does its job, certainly it’s not going to be popular.”

In its first 11 years of operation, the ICC’s prosecutorial strategy has attracted substantial criticism. All eight of its investigations are on the African continent. Many within the African Union and beyond have accused it of targeting one region while turning a blind eye to atrocities elsewhere, and say this undermines its legitimacy.

Meanwhile, the court’s prosecutors have failed to get judges to confirm charges against suspects in five cases. Three defendants in the Kenya case alone received a reprieve due to lack of evidence.

Addressing the debate from the audience, Korir Sing’Oei, a legal advisor in the office of the Kenyan president, argued that the greatest threat to the future of the ICC was fairness rather than the status of those it prosecuted.

Panellist Sarah Nouwen, a professor of law at Cambridge University, said the ICC should review its approach to justice in the wider context of “a world of incredible material, political [and] substantive inequality”.

Apart from Kenya and Sudan, where President Omar al-Bashir is indicted for atrocities in Darfur, the ICC has largely gone after rebel or opposition leaders and avoided incumbent officials.

“If you define justice as accountability, we are getting closer and closer [to succeeding]. But for those who define justice as equality, the glass is getting emptier and emptier, because current inequalities in the world are entrenched by the court,” she said.

Robert Wanjala is a freelance reporter in Eldoret in Kenya’s Rift Valley region.