Article on divisive content of textbooks on Islam got education officials working on something both faith communities could live with.

Article on divisive content of textbooks on Islam got education officials working on something both faith communities could live with. 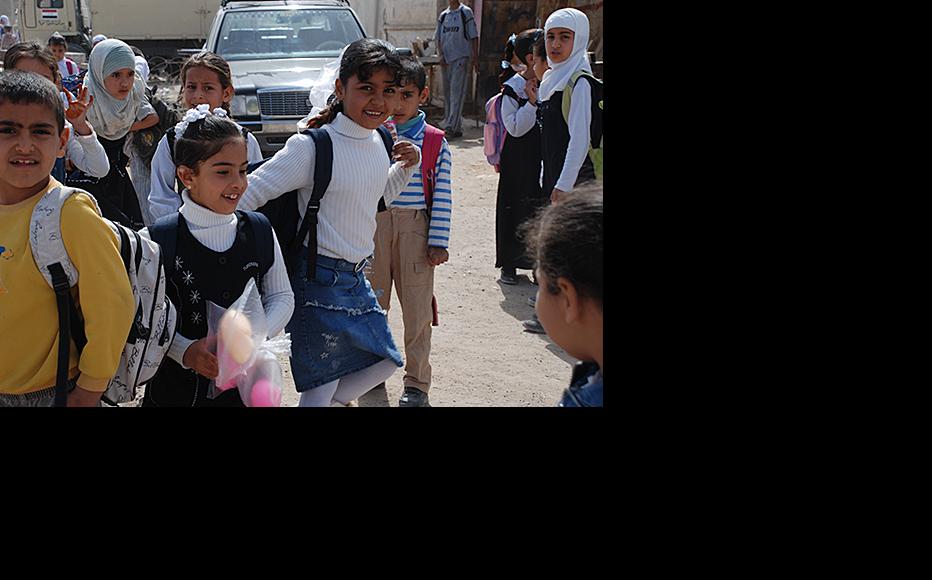 Iraqi school pupils get out after the last exams of the year. June 2012. (Photo: Abu Iraq)
The link has been copied

Parents and teachers say that new school textbooks covering Islam are much more appropriate than previous ones for a society in which Shia and Sunni Muslims have to coexist.

The books brought into use since the current school year began last September reflect a series of revisions designed to accommodate the outlook of both branches of the faith, without either one offending the other.

Work on redrafting the texts was prompted by an IWPR article by Abeer Mohammed published in February 2010, which reported on widely-held concerns that the current books were slanted towards the Shia view on various matters.

Shia form the majority in Iraq’s Arab population, and dominate the current government – Prime Minister Nuri al-Maliki belongs to that faith community. Before Saddam Hussein was ousted by the United States-led invasion of 2003, the situation was the other way round – the school curriculum reflected the outlook of the Sunni minority to which he and his followers belonged.

The article Iraqi School Books Criticised for Sectarian Bias included interviews with leaders, educators and parents who expressed concern that the curriculum might be fuelling sectarian views in the classroom.

In a country with a recent history of sectarian bloodshed, media reporting on religious divisions of any kind is seen as risky. Many Iraqis fear that merely highlighting these sensitive issues will point up differences and increase intercommunal tensions.

That may well explain why the content of school textbooks on faith had never featured in local Iraqi media until IWPR tackled it. Reporting the story was never going to be easy, and Abeer Mohammed faced suspicion and veiled warnings as she pushed officials to respond.

The resulting story was read by Iraqi education officials, who promised to work on amending the curriculum to cut out potentially inflammatory content. (See Iraqi Officials Influenced by Report.)

Education ministry staff worked with local and international experts to draft revisions, and the new books introduced last autumn are the fruits of that labour.

“So far, people seem pleased with the content of the most recent versions of the religious curriculum, and that’s a good indicator of what we’ve achieved,” Ghazi Mutlak, director of curricula in the education ministry told IWPR.

Mutlak acknowledged the role that IWPR’s 2010 report had played in prompting the changes.

"It is a positive thing when journalists prove to be a constructive instrument in their communities,” he said. “There are no words to express how grateful we are for their efforts.”

Abdul Qadir al-Janabi, a Sunni father with two children in primary school, said he was pleased with the changes.

"Previously, the books were terribly biased, but this year it’s much better, thank God," he said.

IWPR has reviewed the content of the new textbooks, and found that year most of the problematic areas mentioned in the 2010 article have been amended.

Some of these revisions involve taking out potentially controversial points of theological difference between Shia and Sunni Muslims, while others simply omit the specifics of religious observance where these diverge.

The old books, for example, had a chapter on how to pray correctly in the Shia manner. Now the text simply outlines commonalities between Shia and Sunni prayer, and adds that "the details can be taught in the family, according to the sect followed”.

Safaa Adil, a 16-year-old Sunni, said that he used to find it odd that he was taught about the Shia way of practicing Islam.

"I’m not confused any more. I can learn the shared general, basic religious features of Islam at school, and learn the details from my family at home," he said.

Israa Makki, a 15-year-old Shia school pupil, said she was happy to be learning general rather than “sect-specific” facts.

"It doesn’t matter how one prays or when one celebrates Eid,” she said. “What really matters is that we are all fraternal Muslims, and the new curriculum enhances this view."

Luma Khadim, a religious studies teacher at a Baghdad school, was also happy with the outcome from an educational perspective.

“It used to be kind of confusing to teach Sunni pupils how to say their prayers in accordance with the Shia way, but that has been dropped from this year's books, and everyone can do it their way," she said.