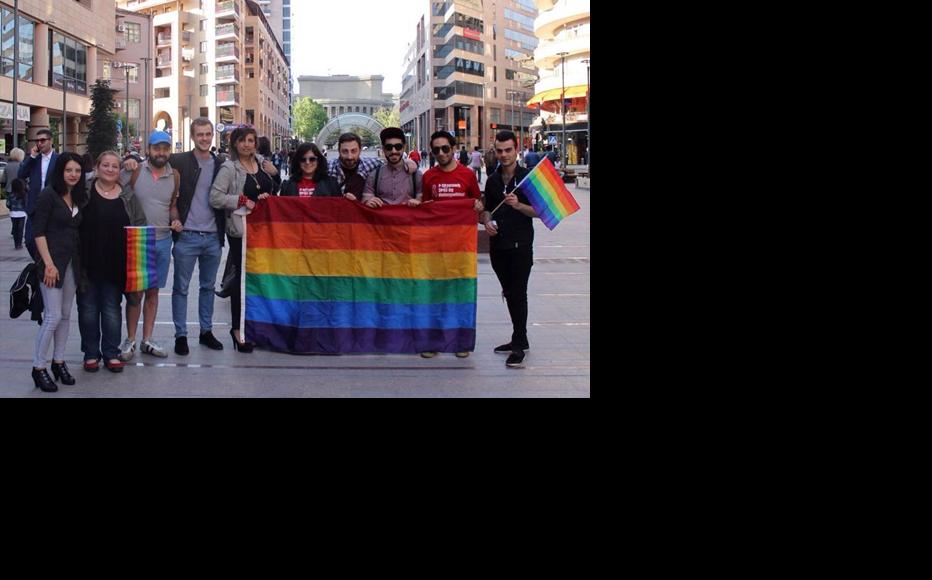 Activists of the PINK Armenia NGO raised the LGBT flag in the centre of Yerevan on the International Day against Homophobia, Transphobia and Biphobia. May, 2015. (Photo: Pink Armenia NGO) 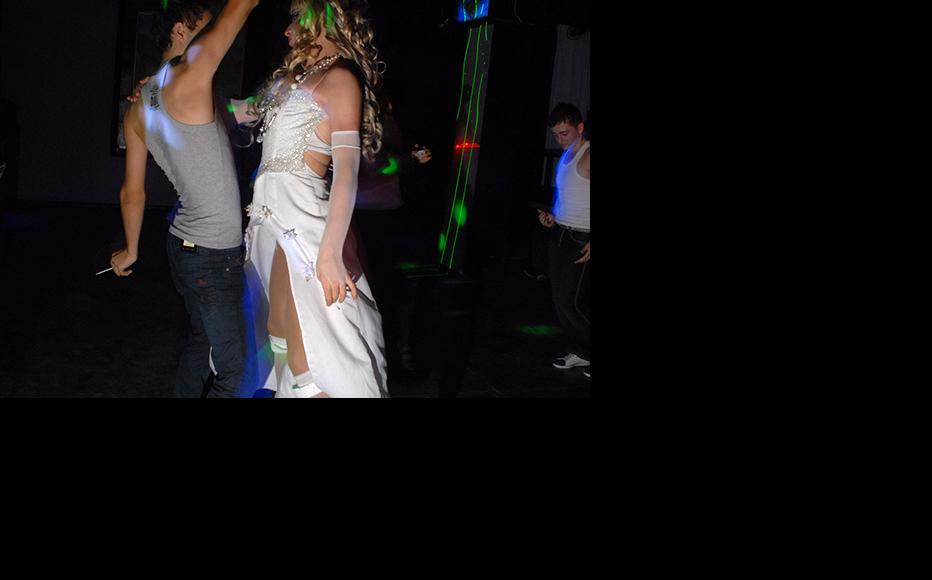 A private trans party in one of the nightclubs in Yerevan. (Photo: Nazik Armenakyan from 4plus)
The link has been copied

Life for LGBT (lesbian, gay, bisexual and transgender) people in Armenia, a socially conservative society where homophobia remains entrenched, is not easy.

The difficulties are multiplied for those living outside the capital, where society is even less tolerant towards LGBT people.  Socialising is particularly difficult, with no LGBT-friendly venues and few public places where gay people can be sure they will not be subject to abuse.

Arthur (not his real name), 25, said that there were no public entertainment spaces in Gyumri or Vanadzor, the country´s second and third largest cities respectively, where LGBT people could feel safe.

“It is impossible for me to go to a coffee shop and not hear hurtful comments or catch hostile glances.  Once I got into a verbal exchange with one of the customers because of an off-the-cuff remark by him, but the manager came and demanded that I leave, saying that the dispute began because of me,” said Arthur, who lives in Gyumri.

Instead, Arthur and his friends go to Yerevan on weekends, over 120 km away, where they can feel more at ease.

“Yerevan also does not have a particularly friendly attitude towards gays, but this is the only place in Armenia where you can feel relatively free,” he said.

Sergei Gabrielyan, head of the New Generation NGO, believes that such intolerant attitudes towards LGBT people in more remote places of the country has caused internal migration.

“An LGBT person who lives in the province tries at all cost to enter any educational institution in Yerevan to move to the capital.  Outside the capital, it is extremely difficult to live a gay lifestyle,” Gabrielyan said, whose organisation works to protect the rights of LGBT people across Armenia.

“Living in the provinces, an LGBT person is forced to hide his own nature, because he will not be accepted as an equal,“ Gabrielyan said.

Research on attitudes towards LGBT people published earlier this year by the Pink Armenia NGO shows that the country still has a long way to go.

According to the survey, 93.8 per cent of the 1,017 people interviewed said they did not want to see gay couples holding hands in the street and 97.5 per cent were against them kissing in public.

LGBT people are “one of the most marginalised, least visible and discriminated against groups” in Armenia as well as in neighbouring Georgia, according to a June report by the Tbilisi-based Women´s Initiatives Supporting Group (WISG).

“Despite a degree of success achieved in recent years, … members of the group continue to face violence, oppression, and harassment from the general public, as well as specific institutions, including medical facilities and the workplace. Bias-motivated violence based on sexual orientation and gender identity (SOGI) frequently goes unreported and, hence, remain without proper investigation and retribution,” the report said.

Life in the capital is by no means easy. Among the hundreds of restaurants, pubs and coffee shops in Yerevan, not a single public entertainment venue caters to the members of the LGBT community.

In 2012, the DIY Club in Yerevan - known as a gay hangout – was firebombed and its owner harassed.

Since then, no one has dared to open a public entertainment venue for LGBT people in Armenia.

There is a private social club for gay men and transgender women in Yerevan, which is open daily to members and their friends.

Nelly (not her real name) the club’s 32-year-old director, is originally from Vanadzor.  When she moved to the capital to join her brother, she found out that he was gay.

“I accepted him from the very beginning.  Through my brother, I met this community,” she explained.

She opened the club last year following her brother’s death “so that people like him can feel comfortable here,” she continued.

Nelly launched by handed out 100 membership cards to people who are still the core visitors to the club.

“I try not to let many people in, so that my [customers] feel comfortable here.  I know everyone personally.  I try to make sure there are no problems, and they listen to me,” she said.

Nelly said she believes that many in the city are aware of her club, but does not expect any attacks.

“We do not interfere.  These people need entertainment.  I told them – do not leave the club, do not attract attention so as to not disturb others.”

Among those in the know, the club is much valued resource.

“This is the only place where I can be who I want to be,” said Milena, a regular visitor. “None of the local visitors… will cast me sidelong glances.  No one will make unpleasant remarks about me.”

Ashot, a security guard at the club, who did not want to use his real name, told IWPR he did his best to protect visitors from unpleasant experiences.

“When strangers try to enter the club, I try to explain in my own way that there is no admittance.  Sometimes I just say that this is a gay club, and people will go away.  It happens that they are persistent in wanting to enter, but I certainly will not allow it,” he said.

In the absence of LGBT clubs, some members of the community try to organise their own parties.

Sarkis, 26, explained how he and a friend had begun putting together nights out.

They first had to reach an agreement with the management of a club, ensure the premises would be protected and put together a guest list.

“The first party was attended by about 160 people,” he said. “We were able to organise great fun for them, but we were very tense.”

Earlier that day he had received phone calls threatening to blow up the club if the party went ahead.  Later, a group of unknown people tried to break down the door and get inside.

“After that, we thought for a long time that it was no longer worth organising LGBT parties,” Sarkis said.

However, demands remained so high that Sarkis and his friend organised another two club nights, the last one attended by around 250 people.

“This was an unprecedented figure for Armenia.  It proved that the community needs such events,” Sarkis said.

Vahan Ishkhanyan, editor-in-chief of Inknagir Literary Magazine, has written about LGBT issues for a long time.

His first article on gay men was published in 2002, when homosexuality was still officially illegal in Armenia.

"Journalists did not want to touch this topic. When I published my first article, after reading it, one of the local editors said with fear that he wouldn't like his son to read this article,” Iskhanyan said.

The following year Armenia joined the Council of Europe and homosexuality was decriminalised.

Despite deep-rooted discrimination, social attitudes towards LGBT people have indeed softened since then.

“Today, there are homosexuals who publically acknowledge their sexual orientation,” Ishkhanyan said.  “In the 2000s, there were many cases of homosexuals who were murdered.  Today, the level of physical violence has decreased, relatively.  We see people who look different from others in their appearance.  It was not like that before.  When I see these changes, I begin to believe that there will be new changes.”

Arman Gharibyan is a freelance journalist in Armenia.