Amid growing tensions with Egypt, leaders and peace activists at odds over implications of uprisings for country’s security.

Amid growing tensions with Egypt, leaders and peace activists at odds over implications of uprisings for country’s security. 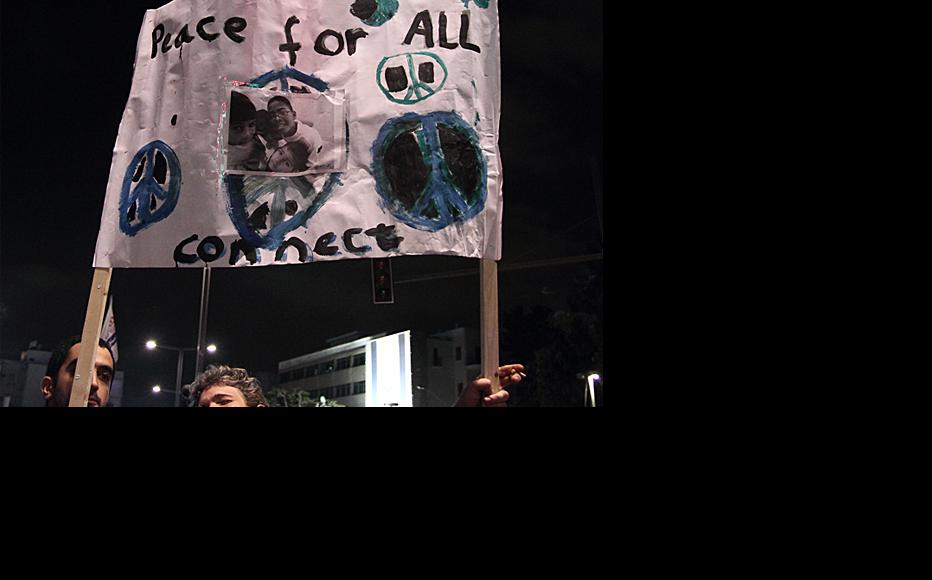 Social protesters in Israel express sympathy for Gaza victims of Israeli raid following attacks in southern Israel. An activist carries a placard with a photo of a Gazan boy killed in the raid. (Photo: Yossi Gurvitz/Flickr)
The link has been copied

An Israeli petition this week supporting the imminent Palestinian declaration of independence points to the Arab Spring and Israel’s recent wave of social protest as reasons to welcome a Palestinian state, but the gesture has been overshadowed by growing scepticism over the revolutions sweeping Middle East.

Signed by 600 Israeli Arab and Jewish public figures, the petition, launched by acclaimed Israeli writers Yehoshua Sobol and Taha Muhammad Ali, argues that “the popular protest movements recently emerging in the Arab world and Israel represent a bona fide aspiration towards normalisation of life, which will exist in a region with a peace that guarantees the fulfilment of the vital needs of the peoples of Israel and Palestine”.

The document explicitly backs Palestinian independence just as the Palestinians prepare to seek recognition of a state of Palestine, based on the 1967 borders, at the United Nations general assembly on September 20. They are widely expected to receive support from a majority of member states in a move that, while largely symbolic, may give the Palestinians some diplomatic leverage and have judicial implications.

In Israel, the move will be viewed very negatively. Indeed, this week’s petition comes at a time of mounting doubts in Israel about the Arab Spring, in part fueled by rising tensions between Jerusalem and Cairo following multiple attacks in southern Israel carried out by Gaza militants on August 18.

Eight Israelis died and the Israeli army accidentally killed five Egyptian soldiers in the incidents, and, in response, thousands of angry demonstrators outside the Israeli embassy in Cairo called for the three-decades-long peace treaty with Israel to be scrapped and the Israeli ambassador expelled.

Israeli defence minister Ehud Barak’s remarks that the attacks have come at a time of “weakening Egyptian control over Sinai” reflect an Israeli assessment which links the removal of President Hosni Mubarak with an increased security threat posed by militant groups on Israel’s southern border.

As early as February, Israeli prime minister Binyamin Netanyahu warned the Knesset of a possibility that “Egypt will go in the direction of Iran”.

Other developments have also added to Israeli fears, including the repeated sabotage of the Egypt-Israel gas pipeline and charges in the Mubarak trial that the deal he signed to export Egyptian gas to Israel was corrupt.

On September 5, Major General Eyal Eisenberg, the army's new home front command chief, said that what “looks like the Arab Spring… can also be a radical Islamic winter".

Minister of home front defence Matan Vilnai backed up these assertions, adding that Israel's national assessment is "that perhaps the Arab Spring will in the long run change the Arab world [but] in the short run it seems that radical Islam will have the upper hand. We are afraid that this will happen in all sorts of countries in which moderate rulers, such as Mubarak, have regretfully gone, and other elements will rise".

In March, the Peace Index – a monthly poll run by Tel Aviv university researchers Ephraim Yaar and Tamar Hermann – revealed that a distinct ambivalence among the Jewish public towards the uprisings.

Some 47 per cent viewed developments in the Arab world as positive for Israel, while only 28 per cent thought they would create opportunities for Israel to make new efforts to reach a regional peace.

Nonetheless, many have drawn overt comparisons between this summer’s social protest movement in Israel, with activists setting up tent cities across the country, and the revolutions sweeping the region.

Participants have expressed their sympathy and admiration for the Arab revolutionaries’ courage [see http://iwpr.net/report-news/tel-avivs-tahrir-square]. Although the attacks in southern Israel have led to activists playing down previous references allying their movement with the uprisings, they continue to view the latter in a positive light.

At a Tel Aviv demonstration over the forced eviction of a large number of the tent protesters, Lior, a 30-year-old high-tech company employee, said that the fears expressed by Vilnai and Eisenberg were irrational.

“Democratisation in the Arab world is good for Israel," he said. "Of course the processes the Arab Spring generated have positive and negative aspects, but none of them are of a catastrophic scale. But, clearly, the leadership can create fear when it is convenient for its political agenda. Fear-mongering is not a new habit here."

Others also argue that pessimism does not benefit Israel.

“Israel’s interest is to create alliance with peoples, not with despots,” said Menachem Klein of the political science department in Bar Ilan university. “Indeed, alliances with the Arab peoples would demand Israel give up occupied territories. It is clearly easier [for Israel] to form alliances-of-interest with non-democratic rulers, to defend them and their regimes by supplying them with intelligence on their enemies and by paving their way to Washington.

“But this only endangers Israel’s future, as the alliance will not hold water when the masses rebel against these dictators.”

Klein described the attitude prevalent among many Israelis as “a bunker mentality; the outcome of a consolidation of fears and apprehensions”.

Moreover, he added, “It is a disgrace for Israel – so proud of its own democracy – that it allies with such oppressive tyrants.”

Yossi Sarid, the former head of the left-wing Meretz party and now an author and columnist, said, "In the past [Israeli leaders] said that it was impossible to reach peace with totalitarian regimes. Now, that non-totalitarian regimes are emerging, they say that it is impossible to reach peace with them. We tend here [in Israel] to adjust our justifications to new developments".

Yaron Ezrahi, professor emeritus at the political sciences department of the Hebrew university in Jerusalem, said that rather than fearing the immediate instability caused by the changes in the Middle East, Israel should look favourably on the revolutions’ long-term implications.

“It took the French more than 100 years to install democratic institutions,” he said. The Arab Spring has, he stressed, “radically changed the concept of what is a legitimate government in the Arab world. In other words – that the authority of the government [not only] comes from the people but also that the people will not anymore be ruled by fear.”

The Arab Spring
Israel
Protests
Connect with us