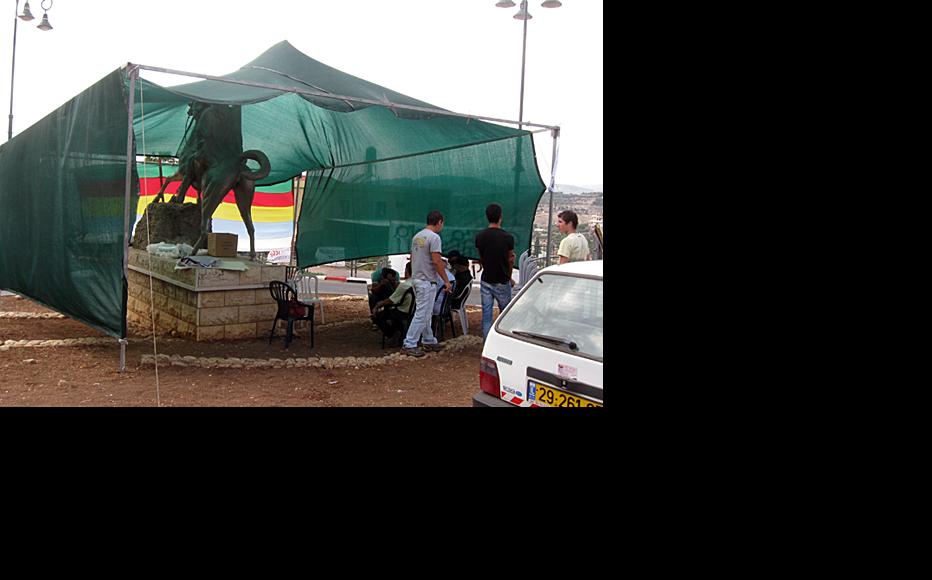 The protest tent in the Druze village of Hurfeish. (Photo: Michal Levertov)
The link has been copied

The Druze village of Hurfeish seems as pastoral as the rural north of Israel can be. Sitting on the north-western slopes of the Meron Mountains amid a national park, the centuries-old settlement of about 6,000 residents looks like an image taken from a tourist postcard: green, beautiful, serene.

But on August 8 the atmosphere here was not as peaceful. A policemen and an official from the national park authority were attacked by village youths when they arrived in Hurfeish to hand out a demolition order for an unauthorised building.

As the disturbance spread, hundreds of youngsters set fire to tyres and blocked Hurfeish's main road - a central northern Galilee transport route – in protests that took four hours to bring under control.

Community leader Fawaz Hossain, 57, denounces the violence. But he puts the blame squarely on the police and the parks' authority for the timing of the demolition order – coming as Israel is gripped by an unprecedented wave of activism over rising housing prices.

What started off in Tel Aviv's Rothschild avenue as a tent encampment has turned into a nationwide call for social justice, at its peak bringing some 300,000 people out on the streets across Israel in peaceful opposition. And although initially seen as a mass movement of Jewish Israelis, the country’s Arab citizens are increasingly becoming involved in the civil protest.

Hossain, sitting in Hurfeish’s own protest tent, situated in the village’s central square - so small the tent is built around a statue of early 20th century Druze leader Sultan Al-Atrash - says that the demolition order was a provocation intended to single out the Druze from the general, non-violent dissent.

"It is as if the authorities don't want our protest to be a civilized one,” he said. “But it is, and we are clearly a part of the wider tent protest, even though there are differences in our needs and demands: it's not the housing prices that we protest against, but the utter lack of adequate housing for us.”

Most of Hurfeish's land was confiscated by the state decades ago, according to Israel’s authoritative newspaper Haaretz. This was mostly for the nature preserve but also partly for the development of a neighbouring Jewish village.

Ever since, Hurfeish's residents have been battling building restrictions in the remaining land, and it is perhaps unsurprising that the village was one of the first Arab communities to join the protest.

Participation still remains low, however, amongst the country’s Arab population, more than 20 per cent of the overall population (the Druze make up some eight per cent of that minority).

This hesitance, says Aida Touma-Sliman, editor-in-chief of the Arabic Al-Ittihad daily newspaper, has been due to a "deep disbelief within the Arab population –following decades of exclusion and discrimination - that it is capable of influencing the general Israeli agenda".

However, Touma-Sliman noted that the struggle directly touched this community’s own problems: lack of land and housing and limited access to social welfare.

While the Arab public in Israel sees the direct impact of the Arab Spring on the Jewish protesters in Israel, the effect on its own willingness to protest is more nuanced, she added.

"The Arab population in Israel indeed draws hope from the Arab Spring. But it’s not only the [violent] events in Syria and Libya, or the fact that the desired changes in Tunisia and Egypt have not yet been realised, that have a dampening effect,” she said. “Arabs in Israel also feel that while the changes in the Arab states are being generated by a great sense of ownership that the citizens there have, the Arab public in Israel feels disconnected and alienated from the rest of the population, thus being deprived of the feeling of entitlement which enabled the protests of the Arab Spring as well as that of the Jewish population in Israel.”

Nonetheless, Touma-Sliman said, the Arab public should join the movement, "If there ever was willingness in the Israeli Jewish mainstream to hear the Arab citizens cry out against discrimination, land confiscations or house demolishing - and to do that not through a nationalist lens - it is now.”

Not all agree. Writing in Haaretz, Arab journalist Zuheir Anderus emphasised that he could and would not identify with the protest because it "ignores my existence and my problems, as a discriminated citizen and a part of a collective to which the government refers with hostility".

Indeed, the 22-member committee that Prime Minister Binyamin Netanyahu appointed this week to offer solutions to the protestors' demands does not include a single Arab representative.

But others see this as a unique opportunity to unite the country’s diverse communities.

Shahin Nassar, a 25-year-old student and journalist, founded an encampment in Wadi Nisnas, an Arab neighbourhood in the northern city of Haifa, on August 4 after participating in a rally in a Jewish neighbourhood where he was disappointed by the lack of any substantial Arab attendance.

"This protest is definitely mine too, and it is for me to determine its nature and its goals,” he said. "Any achievement, whether it is reducing housing costs or electricity prices, will benefit the Arab population just as much. Of course, we are in a unique position, and nobody denies it: we are an integral part of the Palestinian people. But just the same, we are an integral part of the state of Israel.”

Not only has there been immense cooperation between the Wadi Nisnas encampment and others in Jewish neighbourhoods of Haifa, but Nassar sees an opportunity to convince the Israelis who so heartily support the call for social justice to back the Arab struggle for equality.

"The only disputed topic are the [West Bank] settlements, which is not surprising as there are left-wingers and right-wingers among both the Jewish and the Arab protesters,” he said. “Other than that, we agree on all the demands of the protests. Moreover, while each city sends only one representative to the protesters' national meetings, Haifa's Jewish activists insisted that Haifa would send two: one from the Jewish encampments and one from ours. They wanted to make sure that we too will be a part of the central assembly [an ad-hoc coordination committee for the nationwide protests].

“Haifa has always been praised for being a city of co-existence between Arabs and Jews, but this protest is the first time that I really feel cooperation between these populations.”

In Upper Nazareth, a Jewish town close to the Arab city of Nazareth, recent months have seen racial tensions rising. But the encampment in Upper Nazareth is a joint initiative of both local residents and Arab citizens.

Ossama Libbis, 39, a Nazareth restaurant owner, said, “We approached the Upper Nazareth protesters and were surprised to learn that we could reach an understanding with them. There are of course disputes, but we realised that we all suffer from the government's right-wing economic policy and that this is the heart of this struggle. We decided to put aside problematic, nationalistic issues but openly bring forward the unique social needs of each section of the public.”

Every evening, the protesters in the Upper Nazareth encampment gather to talk over their demands and the possible solutions.

Libbis also notes the influence of the Arab Spring on the Israeli protest. "In the Tel Aviv really I saw signs declaring ‘Egypt is Here',” he said, but he is measured with his optimism.

“I don't think that the protest will actually bring about a real economic revolution,” he said. “It's more likely that we will end up merely with a number of reforms. But there is a growing awareness that nationalism is a way for those in power to divert discourse from the real problems.”

The Arab Spring
Israel
Protests
Connect with us