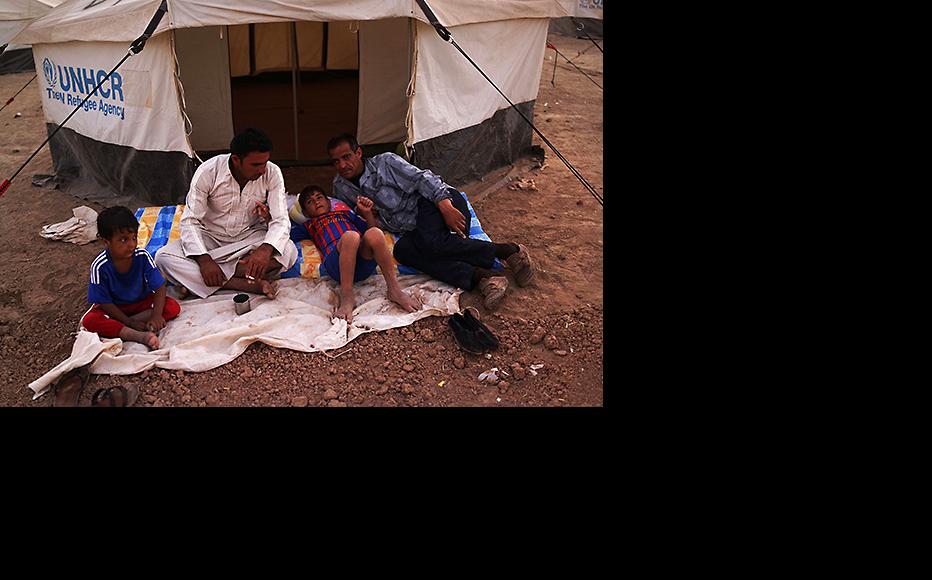 A temporary camp at Kalak for people displaced by fighting in and around Mosul. June 24, 2014. (Photo: Spencer Platt/copyright Getty Images)
The link has been copied

Last week, Abu Mariam understood that his family’s presence in Mosul over many generations had come to an end.

Fighters of the Islamic State of Iraq and Syria (ISIS) had scrawled the letter “N” for “nasrani” – Arabic for “Christian” – on some of the houses on his street.

On the home of a displaced Shia family, the Sunni insurgents wrote the letter “R”, which Abu Mariam later learned stood for “rafidha” – a pejorative term meaning “rejecters”.

To be identified as belonging to either of these categories is now extremely dangerous. ISIS is in the process of expelling members of all non-Sunni religious and ethnic groups from Mosul. including Turkmen, Shabaks, and Yazidis, as well as Shia Muslims and Christians. There are many reports of kidnapping and killings.

Christian sources in Baghdad told IWPR that more than 10,000 families have left Mosul since the insurgents occupied it on June 9.

Abu Mariam, 46, a father of four who works as a driver for four churches in Mosul, had already made plans for his family to go to Dohuk province in the Kurdish region.

But on July 15, the day the ISIS graffiti appeared, he knew they had to go immediately.

He was not reassured when another group of insurgents appeared, using spray paint and a paper stencil to marked houses as “property of the Islamic State”. Asked what that meant, one of the militants said, “This is to protect you and to protect your property.”

A proclamation from ISIS made it clear what the options were for Abu Mariam and other Christians.

“We offer them three choices: Islam; the dhimmi contract involving payment of jizya [protection tax, reportedly set at 450 US dollars per person]; and if they refuse, they will have nothing but the sword,” the declaration read.

A few frantic days after the graffiti appeared, Abu Mariam and his family got away in their old Chevrolet car. He estimates that at least 400 families left Mosul just on July 17 and 18.

A United Nations source told IWPR that as of July 20, the number had reached 700. Many of those escaping were stopped at ISIS checkpoints, harassed and robbed of jewellery, cars, money and other items.

According to the UN source, 27 families have stayed in Mosul and adopted Sunni Islam because they are either too poor or too elderly and weak to leave.

Abu Mariam and his family made it out safely.

They are now living with his parents, sister and his brother’s family in a small house on the outskirts of Dohuk province, with no work and a dwindling supply of cash to pay for rent and other outgoings.

And they know they might never return to Mosul, a city with a centuries-long Christian presence.