Iraqis Divided Over US Troop Exit

Iraqis Divided Over US Troop Exit 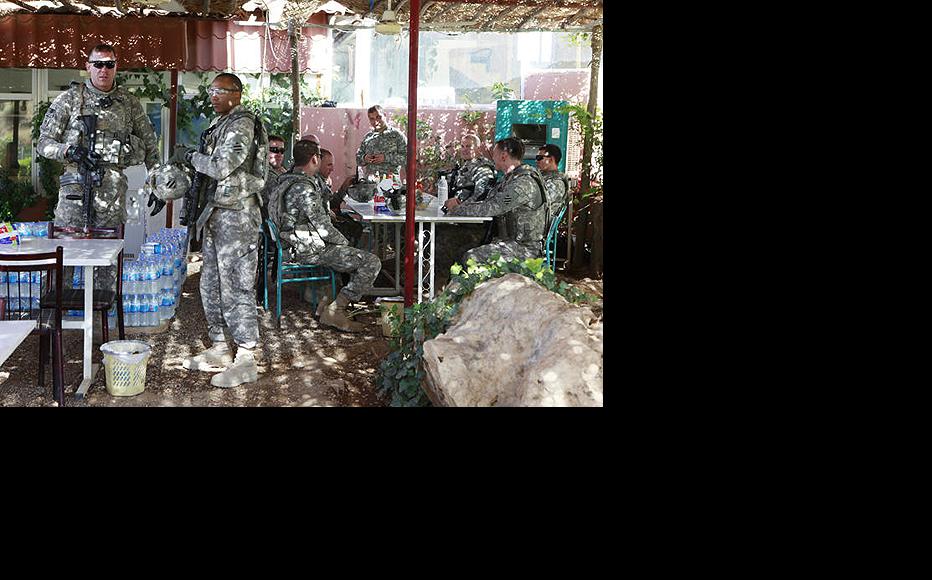 US patrol takes a break at a roadside cafe in Mosul. All combat troops have since left Iraq. (Photo: Tracey Shelton)
The link has been copied

Iraqis marked the end of the American military occupation as an historic milestone this week, but some questioned the true extent of their sovereignty and wondered whether Washington would honour its promise of future support.

United States President Barack Obama announced on August 31 that “Operation Iraqi Freedom is over and the Iraqi people now have the lead responsibility for the security of their country”.

Obama pledged to “support Iraq as it strengthens its government, resolves political disputes, resettles those displaced by war and builds ties with the region and the world”. Yet Obama also said it was time for America "to turn the page" on what some consider to be one of the most divisive chapters in its history.

Iraqis were left to read into the speech whatever they could about the legacy of seven years of military occupation, and a future that begins in the shadow of insurgent violence and political paralysis.

A wave of coordinated attacks in at least 14 cities and towns on August 25 killed more than 50 people and wounded hundreds. Meanwhile, a functioning coalition government has yet to be formed nearly six months after inconclusive national elections. These factors, along with Iraq's still sub-standard social services and utilities, have led some to cast doubt on the timing of the withdrawal of US combat troops.

“The withdrawal was done according to a timetable between the US and Iraq, and [Obama] was careful not to declare America the victor, as [former US president George] Bush did,” said parliamentarian Mahmoud Othman, a former member of the US-created Iraqi Governing Council and now a leader of the Kurdish coalition in Iraq's National Assembly. “But it clearly comes at an awful time. The government isn't formed, and security isn't stable. It's worrying.”

He added, “Obama spoke about Iraq as partner – that was his word. Whether he will keep his word or not, I don't know.”

Iraqi and US officials attempted to ease such concerns in the days surrounding the speech.

American vice-president Joseph Biden and US Secretary of Defence Robert Gates arrived separately in Iraq to reiterate Washington's ongoing support. Biden also met rival leaders of Iraq's bickering political blocs in an effort to smooth the government formation process – a move which some construed as an attempt to exert political pressure.

“Both Biden's visit and Obama's speech can be classed as external interference in Iraqi affairs, and such factors have proven to be useless,” said Jamal al-Battekh, a senior leader in the Sunni-based Iraqiya coalition. “America wants a government headed by Maliki, and this is not acceptable to other voters or Iraq's other political blocs,” he added, referring to Maliki's narrow election loss to former prime minister Ayad Allawi, who heads Iraqiya.

“As an Iraqi citizen, I can see that Iraq is not a sovereign country,” continued Battekh. “Sovereignty only exists if [a country has] a powerful army that can defend its borders. The Iraqi army is no more than a handful of militias that are affiliated with political parties. Anyone who talks about sovereignty or independence in Iraq is delusional.”

Some announced that they were content with the progress made towards stability.

“Bush defeated the dictatorship, and Obama pulled American troops out of Iraq and gave Iraqis their sovereignty, so each one of them did his job well,” said Abdul Hadi al-Hasani, a senior member of the State of Law list, which is aligned with caretaker premier Maliki. “Many of the things Iraq wished to achieve have already been achieved with the help of America; Saddam [Hussein] was defeated and a democratic system was established.

"Now the American forces are withdrawing. The withdrawal was the most important thing for Iraqis and now it is done, just as Obama said,” he added.

Hasani said Iraqis would be watching closely to see whether Obama’s words translated into action, especially with regard to the training and equipping of Iraqi forces. He rejected suggestions that the US or other foreign powers were meddling in Baghdad.

“We are a sovereign country, as the Iraqi premier said, and the proof is that even after five or six months after the election, Iraqi politicians are still in discussions and we do not have a government. No one has manipulated our politicians or changed their minds – we are an independent country,” Hasani said.

Reactions from Iraq’s disparate political movements have generally divided along partisan lines. Critics of America pointed out that although the US did topple Saddam Hussein, the US-led invasion also obliterated Iraq's infrastructure, sparked a sectarian civil war, and indirectly cost the lives of at least 100,00 Iraqi civilians.

“The Sadrist movement doesn’t trust the speech by Barack Obama because relations between Iraq and the US are still unequal, just as they have been in the past,” said Qusay al-Suhail, a senior leader in the political party of anti-American Shia cleric Muqtada al-Sadr. “We are against any outside interference in Iraq, whether it is from the US or any other [country].

He added, “The Sadrist movement will continue to regard Obama as the president of the occupied state of Iraq. We will trust the US administration only when the last American soldier has left Iraq.”

The US, which will leave roughly 50,000 personnel as trainers and advisors in Iraq until 2011, has launched an estimated 53 billion dollar rebuilding campaign that has drawn controversy over allegations of mismanagement, despite making vast improvements to infrastructure. For example, the US has spent nearly 4.6 billion dollars on electricity upgrades, yet most Iraqis still only receive between four to eight hours of power per day.

Some politicians believe that ongoing support from the US is the only way to improve Iraq's debilitating social conditions, and the first step in this process is kick-starting the stalled negotiations to form a government.

"It is almost six months since we had the election,” said Falah Mustafa, head of the foreign affairs department in the Kurdistan Regional Government. “In the civilised world, a government would be formed in a few days or weeks, or at least within a couple of months.”

Mustafa said that Obama’s speech must be taken seriously because it confirmed the ongoing US commitment to Iraq, marked the removal of American combat troops, and called for a new government.

“A chapter in that relationship has ended,” he said. “The Iraqi leadership has to understand that this is an important stage in our history.”

Iraq
Conflict resolution
Connect with us