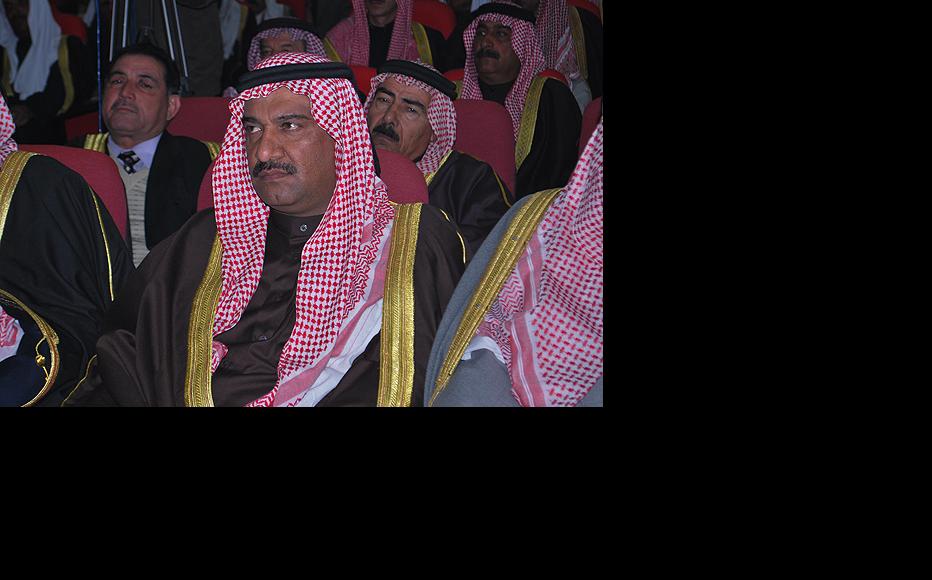 Sheikh Raad al-Sabah, leader of the Sahwa militia in Ramadi, attends a tribal council meeting. (Photo: Uthman al-Mukhtar)
The link has been copied

Leaders of pro-government Sunni militias have accused Iraq’s national leaders of leaving them in poverty and vulnerable to violence. The warnings come as al-Qaeda employs a mix of intimidation and enticement to lure Sunni fighters to joint the insurgents.

The future of the United States-backed Sahwa movement has become a matter of increasing concern, particularly following the withdrawal of the last US combat troops on August 19, and amid a political stalemate in which Iraqi leaders have failed to form a new government since the March parliamentary election.

Sahwa, also known as the Awakening Councils or Sons of Iraq, is a Sunni Arab tribal movement that from 2006 onwards, played a key role in battling insurgent groups. Many of its members were themselves former insurgents.

The US military used to pay each fighter 300 dollars a month, but Sahwa leaders complain that the handover of military control to the Shia-dominated Iraqi government has led to delays and non-payment.

"We have left our posts, the army and the government are floundering around, and everyone is concerned about the US pullout,” said Khala al-Tamimi, a Sahwa leader in the town of Abu Ghraib west of Baghdad. “The new government will have to beg us to organise ourselves and launch a new war on al-Qaeda cells to restore the security we’ve achieved during the last two years.”

Resentment among Sahwa members is growing, and is directed against both the US and the Iraqi government, which they accuse of failing to deliver on pledges to provide jobs or integrate them into the Iraqi security forces.

"We need to realise that the Sahwa has been betrayed by the Americans and by [Prime Minister] Nuri al-Maliki's cabinet,” said Sheikh Hamid al-Haees, head of the Anbar Rescue Council, a Sahwa group in Anbar province. “We have accomplished what the Americans and the Iraqi army failed to do. We defeated al-Qaeda in our towns, but the leaders who fought al-Qaeda are sitting in cafes with no jobs and they aren’t being paid a penny.

"Their backgrounds prevent them from working in normal jobs. Maliki offered these men jobs such as cleaners and road-sweepers – that’s an insult to them," he added.

Al-Qaeda’s mounting influence and new tactics have made the situation more complex. The group has alternated between brutal attacks on Sahwa members and offers of forgiveness and wages if the militiamen switch sides and take up arms against the US and Baghdad.

In recent weeks, the killing of senior Sahwa figures has intensified. On August 23, a local chief was shot dead in Baquba, 65 kilometres northeast of Baghdad. A week earlier, a bomb attached to a car killed another Sahwa chief and injured his brother in the same city.

Sahwa has been especially vulnerable in Iraq’s western Anbar province, where the group was founded.

“Sixty per cent of the armed attacks [in Anbar province] have targeted Sahwa, especially between mid-March and early August,” said Captain Ali al-Dulami of the Ramadi police. “Twenty-three houses have been destroyed and 29 Sahwa fighters have been killed by IEDs [improvised explosive devices] or assassinations using silenced pistols. Forty-four have been wounded and 12 leaders have quit their posts – some of them have even left Iraq.

The attacks culminated on July 18 when a suicide bomber killed 45 Sahwa members and injured dozens more as they stood in line to collect allegedly overdue salaries in a southern suburb of Baghdad. The same day, a second suicide attack targeted the local Sahwa headquarters in the north-eastern city of Qaim, killing three and wounding six.

The violence has left Sahwa members feeling they have been hung out to dry.

“The government has left us exposed to al-Qaeda,” said Sheikh Raad al-Sabah, the Sahwa leader in Ramadi, a town in Anbar province. “Even our personal weapons were confiscated under the pretext that they were unlicensed. All the sacrifices we have made have gone to waste. Today we stand in the face of a new storm – al-Qaeda. The government has condemned us to death.”

Captain Dulami added, “This new targeting by al-Qaeda has reinforced what many believe, that Sahwa was just a shoe that the US and the government put on to step out of the quagmire the Sunni provinces were in when they were controlled by al-Qaeda.”

The delays in wage payments are a source of deep frustration for Sawha stalwarts.

Sheikh Mohammad al-Zawbai, spokesman for the Sahwa movement in eastern Fallujah, told IWPR the force there had not been paid in three months.

The charge that payment problems are driving Sahwa members to join al-Qaeda was denied by Brigadier-General Maared Hassoun, head of the interior ministry’s tribal affairs department. Hassoun said 20 per cent of Sahwa fighters had been taken on by the defence and interior ministries, and 75 per cent had entered employment with other ministries.

"What’s left is a very small number who haven't joined any ministry, and even they are receiving adequate help,” Hassoun told IWPR. “As for those who’ve joined the security and service-delivery ministries, they receive wages just like their colleagues. There’s no truth to reports that Sahwa members are about to join al-Qaeda."

However, Rifat Mohammad, head of the government’s National Reconciliation Committee in Anbar province, acknowledged that pay was arriving late in the region, and was lower than it used to be.

“The government has offered wages to those who fight al-Qaeda in dangerous areas, but the sum doesn't amount to ten per cent of what the US used to pay,” he said. “In addition, the payments usually arrive late – once every three or four months. Some Sahwa members haven't been paid in six months.”

Mohammad said the authorities had offered Sahwa combatants employment on a par with their levels of education, but many had turned down jobs as security guards or petrol station attendants because they viewed such work as beneath them.

In addition to attacking Sahwa members, al-Qaeda has used other forms of intimidation and enticement in its efforts to break up the organisation.

Sheikh Faleh al-Alwani, a Sahwa leader in the western part of Anbar province, said he and at least six other militia leaders had received notes from al-Qaeda asking them to turn a blind eye to insurgent actions, and to collaborate in planting IEDs and ambushing US and Iraqi troops.

“They said they would open their arms and would pardon and protect those quit their Sahwa posts and renounced their allegiance to the US,” Alwani said. “In return, they said, they would not punish us for having fought them in the past. And we would get paid – something we desperately need now that the government has dumped us.”

Qais al-Obeidi, who lectures in political science at Anbar university, argues that Sahwa fighters have too much to lose by defecting to al-Qaeda. The fighters are registered with the authorities and could easily be tracked down by the security forces if they were to leave their posts, he said.

Nor would they face much future with al-Qaeda, he said.

“Returning to al-Qaeda would be like committing suicide because al-Qaeda can’t be trusted,” he said. “They may kill Sahwa members after using them, just like they used to do with policemen whom they’d recruited.”

Not everyone is so sure. Mizhir al-Mulla, a member of Anbar provincial council, said he was deeply concerned about the timing of al-Qaeda's attacks and its attempts to win over disgruntled Sahwa members.

He worries that al-Qaeda is plotting "something big" in Anbar.

"We are facing a serious problem,” he said. “We have seen al-Qaeda grow as a result of the government crisis and the security situation. We are afraid it will find a way to attract desperate Sahwa fighters who’ve had nothing but government lies and al-Qaeda threats."