Soldiers at remote outpost near Syria lead a spartan life on the look out for infiltrators.

Soldiers at remote outpost near Syria lead a spartan life on the look out for infiltrators. 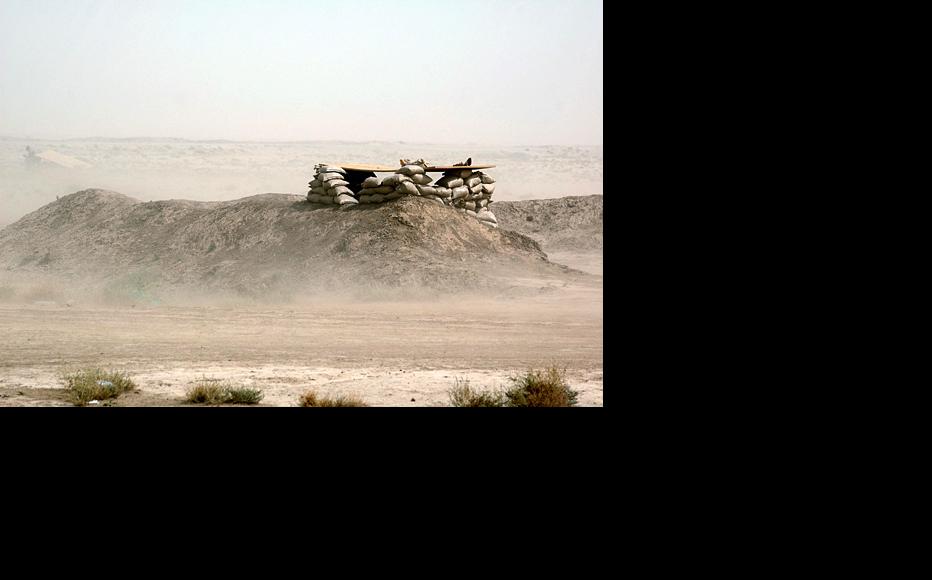 Iraq’s long borders remain vulnerable to infiltration by smugglers and insurgents. (Photo: Kamaran Najm/Metrography)
The link has been copied

Sandstorms and wolves move freely across the frontier between Syria and the north-western tip of Iraq’s Nineveh province.

Smugglers and insurgents have to dodge the soldiers of Maggir al-Thib, a border outpost comprising roughly ten sheds in the desert.

Serving their country in barren isolation, the 40 or so residents of the base are drawn from various parts of Iraq and regard themselves as the military’s unsung heroes.

“We are the men of the shadows,” said Private Hussein Abbas, one of the guards. “Unlike other Iraqi regiments, no one appreciates what we do.

“Were it not for us, Baghdad would have become a playground for bombers. Its grocery stores would be markets for narcotics.”

Though they complain of being ignored, many of the men at the base admit they prefer the clear battle-lines of the desert to the hidden perils of Iraq’s towns and cities, where insurgents and militiamen mingle with civilians.

“Here, I know my enemy,” said one soldier, who refused to give his name. “Back there, it’s chaos.”

Isolated for months on end from their communities, the soldiers form friendships that disregard the divisions of faith and ethnicity that still define most Iraqi institutions.

Abbas described the room he shared with a Sunni Arab soldier and a Christian as “Iraq in miniature”. A Shia Arab himself, Abbas’ family lives in the southern town of Amara, beside the Iranian border at the other end of the country.

“We laugh when we see politicians speak in sectarian undertones,” he said. “If they came here for a single week, they would know what it is like to be an Iraqi and to protect the country.

“When we intercept suicide bombers, we do not ask them where they intended to blow themselves up, but rather, why they entered Iraq in the first place.”

Insurgents are a primary target for the thousands of guards deployed along Iraq’s long western border with Syria.

After a series of massive bomb attacks on ministries in Baghdad late last year, the Iraqi government accused Damascus of facilitating the outrages by offering sanctuary to al-Qaeda sympathisers and loyalists from the Baath party of former Iraqi leader, Saddam Hussein. The Syrians denied the charge.

At the height of the sectarian conflict, Syria was also accused of allowing hundreds of foreign fighters into Iraq, swelling the ranks of the Sunni Arab insurgency.

At Maggir al-Thib, a lone Syrian flag in the distance was the most visible sign of Iraq’s neighbour. According to the border guards, the flag had to be replaced every three to four months after being shredded by the desert winds. “This is the only time we get to see the Syrian soldiers,” said Abbas.

Some of the men also said they used Syrian phone cards to call their families, as Iraqi mobile operators did not provide any coverage in the area.

Brigadier General Ismail Hakki al-Fahdawi, the commander of the border force at the base, said his men had once arrested more than 500 infiltrators from Syria in a single year.

Though the insurgency was less active now, Fahdawi said his men were taking a more aggressive approach. They were focusing on regions such as Husaybah in Anbar province and Jebel Sinjar in Nineveh, which host tribes with links on both sides of the border.

“The historical ties [between the tribes] have provided a cover for infiltration,” Fahdawi said.

With the United States set to withdraw the bulk of its forces from Iraq in August this year, the border force says it has been showered with new equipment, including night-vision technology and monitoring devices.

Nonetheless, Fahdawi said, his team faced enormous challenges. “The border between Iraq and Syria is long, rugged and easily crossed. We work according to the resources we have. US forces provide air cover only along the no-man’s land,” he said.

Corporal Mohammed al-Dulaimi, a soldier manning an observation tower at Maggir al-Thib, said his colleagues had regularly been out-maneuvered by infiltrators. “The smugglers’ vehicles and weapons were more advanced than ours,” he said.

However, conditions had recently improved with the delivery of up-to-date equipment. “Some of our posts are now better equipped than the homes we live in,” Dulaimai said. “Sometimes, even the food we receive is better than what we get at home, which is good for morale.”

The base has no running water and no sewage system. All basic supplies – from food to shaving razors – are delivered by truck. The drivers of the vehicles also act as couriers, carrying letters and parcels for the men.

The border guards are constantly on duty, taking turns to perform 12-hour shifts. They go home for roughly ten days every eight weeks and are paid a monthly wage of between 700,000 and 900,000 Iraqi dinars (about 650 to 850 US dollars).

Countless men from the border force have been killed or kidnapped while travelling along the highway to homes in other parts of Iraq.

According to Private Bassim Sabah, Abbas’ room-mate, the unit at Maggir al-Thib makes between five and 20 arrests every month. He said roughly half of those captured were armed, while the rest were small-time smugglers, transporting cigarettes or cattle.

During this reporter’s visit, an alarm was sounded. A group of men dashed out and returned an hour later, cheering the capture of three suspected smugglers who had been travelling in a jeep with a machine gun.

Gunmen are not the only cause of alarm. Sabah smiled as he recalled a recent incident when the men abandoned their break to follow up an alert.

“The culprit turned out to be a wild wolf, trying to hunt its prey. It had kicked up a cloud of dust, which we mistook for a sign of infiltrators,” he said.

The animal may have been there longer than the men. In Arabic, Maggir al-Thib means den of wolves.

Uthman al-Mukhtar is an IWPR-trained reporter based in Fallujah. This story was edited by Neil Arun, IWPR’s Iraqi Crisis Report editor based in Erbil.