Basrans not sure what to make of return of detested former leader’s plaything.

Basrans not sure what to make of return of detested former leader’s plaything. 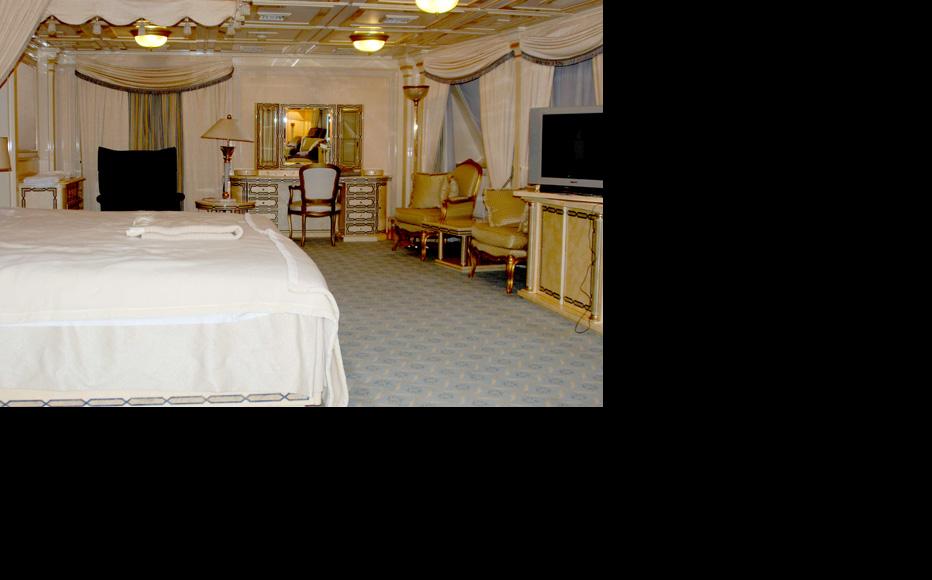 The interior of Saddam’s luxury yacht, which arrived in the southern Iraqi port of Basra on November 2 after spending more than two decades in Saudi Arabia, France, Greece and, most recently, the United Arab Emirates. (Photo: Ali Abu Iraq)
The link has been copied

The acquisition by the Iraqi authorities of a luxury yacht formerly owned by Saddam Hussein has drawn a mixed reaction here, with some hailing it as a small victory over the tyrant and others expressing indifference.

The 82-metre-long vessel sailed into the port of Basra on November 2 where it was met by cheering crowds, amongst which were senior officials who said its return symbolised the struggle of the Iraqi people.

"The return of the yacht means that peoples' will is stronger than the tyrant’s. Saddam Hussein built this yacht to be used to his own personal purposes, but here it is returned to Iraqi people," said Minister of Transportation Amer Abdul Jabbar, who waved to the crowds from the deck of the yacht.

After pulling into Basra's Abo Felos port, the boat was opened to the public with throngs of locals gaping at its opulence.

Saddam is particularly hated in the Basra region because he drained the region’s vital waterways, razed thousands of hectares of farmland and brutally subdued the local Shia population.

Built in 1981 for an estimated 25 million US dollars, the 14-room yacht boasts a helicopter pad, gold-plated toilets and a submarine. Formerly the Ocean Breeze, the boat was renamed Basrah Breeze at the homecoming event.

"Instead of having this beautiful thing owned by the only by the tyrant himself, it is owned now by the all Iraqi people," said Mayada Hussein, who was touring the yacht with her husband.

But others took offence at the elegant yacht's over-the-top amenities, which contrast starkly with the poor facilities ordinary people in Basra have to contend with.

The oil-rich city was the site of repeated demonstrations over poor public services earlier this year, and many residents complain of environmental problems, joblessness and corruption.

"I don't care about this yacht, neither in the past nor now. If you ask me what I care about, I would say a better standard of life and good job opportunities," Ameen Ali, a student in Basra, said.

Ownership of the Breeze hasn't always been clear. According to Mahdi Ali Askar, the general director of naval transportation, the boat was removed from Basra during the Iran-Iraq War and later given as a gift to the Saudi royal family who, in turn, presented it to the royal family of Jordan.

From here, reports differ on the yacht's course. Local media has reported that it was sold to a Moroccan company and used to ferry well-heeled passengers from Paris to Rabat. Abdul Jabbar said the boat has spent many years harboured in Nice on the French Riviera.

"The yacht was in France and there were lots of debts. There were threats to seize and confiscate it, but finally after 2003 we demanded it back. After difficult negotiations we were able to pay the debts and get it,” said Abdul Jabbar, who added that Saddam never officially changed its ownership when he presented it to the House of Saud and this oversight allowed Baghdad to retrieve it.

According to Askar, the government tried to sell the boat for 30 million dollars but got no offers and decided to sail it home.

"We will develop a plan to upgrade it and then we will turn this yacht into a tourist facility to serve the Iraqi people. We have more than one idea for this; it could be turned into a ship to transfer businessmen across the Gulf States; or it can be used to move pilgrims between Iraq and Iran," Abdul Jabbar said.

Others hope there are more practical applications.

"I'm so glad [the yacht has returned]. I feel like it is something that was stolen from the Iraqi people and now it is back. I hope we can hold parties and wedding in it," Hussein, during her tour of the yacht, said.

But even as the Al-Khashaba band led the crowd in songs and traditional dances, and fireworks illuminated the evening sky, some Basrans were still unconvinced of the yacht's significance.

"People care more about getting clean water and 24 hours of electricity than this yacht," Ali said. "Life here will still be the same with our without it."