Countrywide demonstrations over dismal services have already forced a number of officials to quit.

Countrywide demonstrations over dismal services have already forced a number of officials to quit. 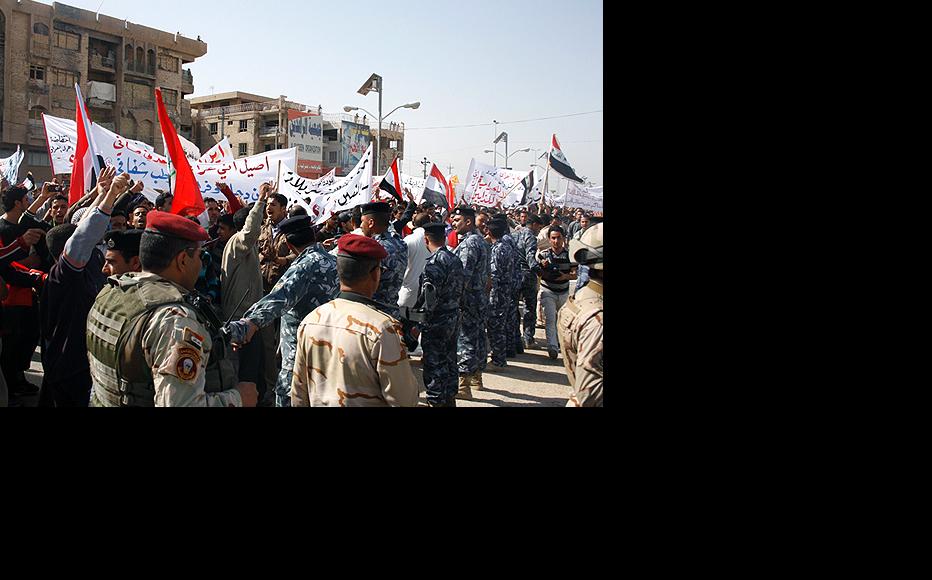 Fallujah residents protest during Iraq&amp;#039;s &amp;quot;Day of Rage&amp;quot; on February 25 2011. (Photo: Uthman al-Mukhtar)
The link has been copied

Iraqi leaders have called for early provincial and municipal elections to be held following violent demonstrations demanding better services and an end to corruption which have swept Iraq in recent weeks.

At least nine local officials, including two provincial governors, also announced that they would step down in response to protesters’ demands for substantial government reform.

The resignations came in the wake of Iraq’s “Day of Rage” demonstrations on February 25, when thousands of people in towns and cities took to the streets, chanting anti-government slogans and demanding change.

Shiltagh Aboud, the governor of Basra, announced his resignation last week following weeks of protests in which angry residents called for provincial officials to go and demanded better living conditions. Basra, home to the country’s biggest oil fields, is the main revenue earner for Iraq but locals maintain the oil wealth has not benefited ordinary citizens.

Basra had a budget of 800 billion Iraqi dinars (more than 680 million US dollars) for local projects in 2010, according to the parliament’s economic committee. Residents say, however, that rubbish remains piled up in the main streets; the sewage system is poor and there is little access to clean drinking water or an adequate electricity supply.

“Where has our budget gone? Where has our wealth gone?” Hassan Shakir, a 35-year-old teacher in Basra, said. “Before [the US-led invasion of] 2003, I had more electricity than I have now. Our conditions are deteriorating while our millions of dollars are disappearing.”

These poor living conditions are not confined to Basra. In dozens of towns and cities across Iraq, citizens have railed against unemployment, corruption and a lack of services.

In Babil, west of Baghdad, Governor Salman Nasir al-Zargani stepped down earlier this week following calls for him to leave. In Fallujah, south of Baghdad, the entire city council resigned. In Riyadh district, western Kirkuk, three local officials quit in the wake of bloody demonstrations in the province.

Following the fall of the Saddam regime in 2003, local officials were given more power to administer services and projects in their areas. In the 2009 provincial council polls, voters threw out many incumbents, but the feeling is that even those that replaced them have not delivered on promises since taking office.

“We regret voting for them,” Yassir Thamer, a 29-year-old Mosul resident said. “We call on the local government to resign. We want to form a new one because this one has proved to be a failure.”

In response to mounting pressure from local demonstrators, parliamentary speaker Usama al-Nujaifi called on February 27 for early provincial and municipal elections to be held, saying new polls would give people a chance to “elect candidates whom they believe can administer provincial affairs”.

Nujaifi added that the government and the country’s electoral commission should look to hold the ballots within three to four months.

Prime Minister Nuri al-Maliki this week backed the election calls, which could cost his State of Law coalition seats.
Maliki’s list swept to power in eight largely Shia governorates in 2009 on a populist agenda that promised better services and governance. But Maliki loyalists have been the targets of some of the biggest protests across the country.

State of Law leaders that have stepped aside, include the governors of Basra and Babil as well as Wasit governor Latif Hamad al-Turfa, who reportedly fled after protesters angered by local corruption torched government buildings earlier this month.

Qasim al-Aboudi, spokesman for the Independent High Electoral Commission, told IWPR that the commission would consider the demands for early elections. He said the commission will evaluate the budgetary and time implications of holding them.

Maliki has also called on Nineweh governor Atheel al-Nujaifi, from the rival Iraqiya list, to resign after five people were reportedly killed during a protest in the provincial capital, Mosul. Nujaifi is the parliament speaker’s brother.

The violence in Mosul was one of several bloody demonstrations on February 25 in which at least 14 people died and hundreds more were wounded.

Many people said that they were motivated by the demonstrations in other Middle Eastern countries such as Tunisia and Egypt. But unlike those countries, where people demanded regime change, Iraqi demands have focused on better services, jobs, eradicating corruption and dismissing local officials.

Saadi Kareem, professor of political science at Baghdad university, said that local authorities were under mounting pressure because they now have the power to provide services and manage their day-to-day affairs, which was not the case under the Baathist regime’s highly centralised governance system.

“The people now know who is in charge of providing services such as clean water and sewage system and electricity,” he said.

“Local authorities are closer to our lives,” Saad Nafea, a 31-year-old government employee, said at the February 25 demonstrations in Basra. “They are well aware of our suffering and the condition of the city.”

But local officials maintained that they could not be held solely responsible for the poor conditions in their provinces, arguing that the federal government also plays a role through its ministries and allocation of budgets.

Anbar provincial council chairman Jasim al-Halbosi said some of the protesters’ demands “are not under our authority. Our power is limited, and we will negotiate the demands with Baghdad”.