One year on, rallies run out of steam and few demands have been met. 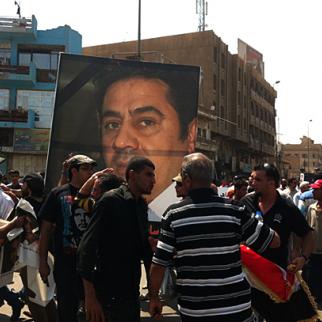 At a demonstration in Baghdad in September 2011, protestors hold up a picture of Hadi al-Mahdi, an Iraqi journalist shot dead at his home. (Photo: Khalid Waleed)

One year on, rallies run out of steam and few demands have been met. A year after Iraqis began protesting about poor public services and lack of employment opportunities, activists complain that none of their demands have been met.

At a rally to mark the first anniversary of weekly protests on Baghdad’s Tahrir Square last week, only a few dozen people turned out, and they were heavily outnumbered by armed members of the Iraqi security forces.

Inspired by uprisings elsewhere in the Middle East and North Africa, thousands of Iraqis turned out on Baghdad’s Tahrir Square on February 25, 2011, calling for more jobs and better services.

The demonstrators – most of them young activists and social media users – hoped they could spur the authorities into responding to their demands.

Initially, there were signs it might be working. Prime Minister Nuri al-Maliki gave his cabinet 100 days to improve the delivery of services and also promised more work opportunities for young Iraqis.

A year on, however, few improvements are in evidence.

“Unfortunately, the Iraqi protests have failed to make an impact. That’s a shame, in a country that’s supposed to be democratic,” Kadhim al-Meqdadi, a media studies professor and analyst in Baghdad, said. “Last year, I was getting electricity for three hours a day. After more than a year of protests, I still get the same amount.

Government media adviser Ali al-Mosawi said the protestors could not claim to speak for the Iraqi nation as a whole.

“They are a small group of people whose numbers decrease week after week. They do not represent the Iraqi people,” Mosawi said, adding that the government already had programmes in place that would address key public priorities.

Haider Hamzoz, a well-known blogger who has been part of the weekly rallies, said the very fact that people carried on turning up should be seen as a success.

“Although they haven’t achieved what they dreamed of, they keep on protesting, they keep up their weekly attendance, and that’s a good achievement in itself,” he said.

Hamzoz, who was beaten twice last year during demonstrations, claimed that the low attendance figures were a result of the tough security measures adopted by the government.

“How can [numbers] not decrease when a crowd of a few dozen civilians is surrounded by more than 1,000 heavily armed members of the security forces?” he asked. “It’s a terrifying scene for the average citizen.”

Every Friday, Tahrir Square is blocked off to vehicles and pedestrian access is limited to only one entrance, where intensive security checks are imposed.

Mosawi insisted that the only reason for deploying the security forces was to protect people from bombs and terrorist attacks.

The Iraqi government has, however, faced criticism for its handling of the protests.

In its 2012 report, the New York-based group Human Rights Watch said that during nationwide demonstrations on February 25 last year, the security forces killed at least 12 protesters and injured more than 100 across the country. In Baghdad, they beat unarmed journalists and protesters, smashing cameras and confiscating memory cards.

After attending the Baghdad demonstration, Hadi al-Mahdi, a popular radio journalist often critical of government corruption and social inequality, was arrested, blindfolded, and severely beaten by the security forces, along with three other journalists.

On September 8, an unknown assailant shot Mahdi dead at his Baghdad home. Immediately beforehand, he had reportedly received phone and text messages warning him not to return to Tahrir Square.

The interior ministry promised to investigate his death, but no one has been charged as yet.

Mosawi dismissed suggestions that government restrictions had curbed the demonstrations, saying this was down to the organisers.

“They failed to attract people and convince them to join rally – it’s their fault,” he said. “So why do they blame the government?

Other commentators say the Tahrir Square protesters lack leadership, common cause, and experience.

A blogger who calls himself Mohammed al-Iraqi said, “At one of those rallies, there were two groups at the same square holding signs about detainees. One group called for their release, and the other demanded their execution.”

Social scientist Abdul Khaliq al-Shemari believes Iraqis have not taken to mass demonstrations because they do not believe it will make a difference.

“Iraqi people have no faith in themselves or in their ability to change,” he said. “America taught the Iraqis that it is others who will bring about change, not them.”

Hamzoz believes that Iraqis could take charge of their own futures by overcoming the barrier of fear built up over past decades.

“That’s one of the lessons these protestors offer to their people in Iraq,” he said.