Tehran has a complex game to play as it struggles not to take sides. 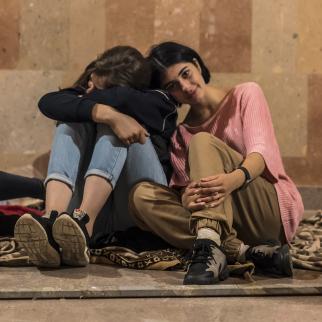 Sisters Galina and Elina Balasanyan in the basement of a church where they have been sheltering from fighting in Stepanakert, Nagorno-Karabakh, October 2020. © Brendan Hoffman/Getty Images 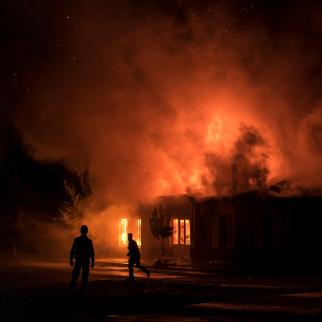 A fire burns in a hardware store after a rocket attack caused the building to catch fire on October 3, 2020 in Stepanakert, Nagorno-Karabakh. © Brendan Hoffman/Getty Images

Tehran has a complex game to play as it struggles not to take sides. 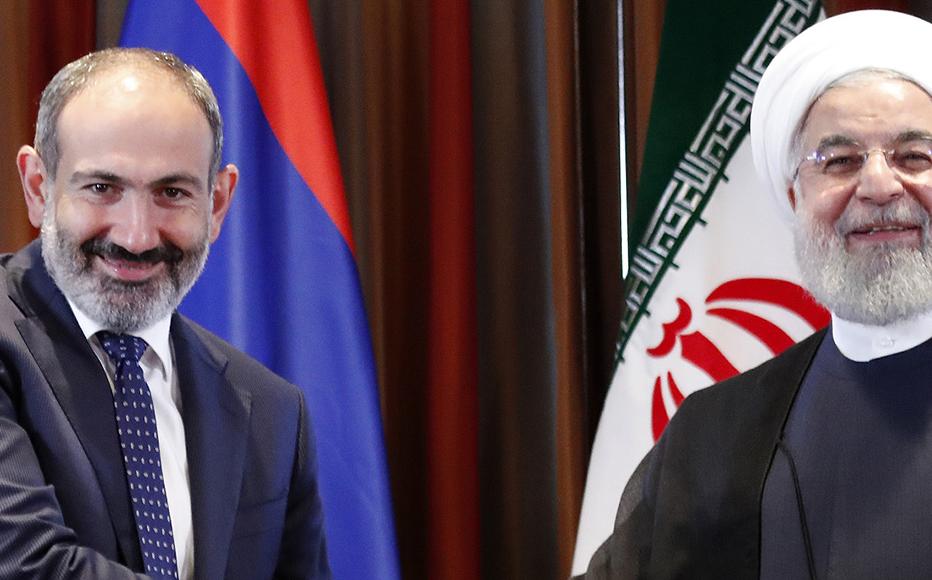 Home to significant minorities of both ethnic Azeris and Armenians, Iran shares borders with both countries and has a keen interest in the conflict not spilling over. As Tehran attempts to position itself as a mediator, Ali Reza Eshraghi, projects director for IWPR’s Middle East and North Africa division, looks at how the Islamic republic is attempting to negotiate a careful path through a potentially very perilous situation.

Eshraghi: Three main factors shape Iran’s attitude - at the public opinion level and the policymaking one- toward the Nagorny Karabakh crisis. They are the ethnic and religious dimension, and most importantly the geopolitics and balance of power in the region.

On the one hand, a relatively prosperous Armenian minority lives in various cities across Iran. On the other hand, there is a significant ethnic Azeri population in four north western provinces as well as the capital.

The Armenian minority has little influence in Iran's domestic politics. Their biggest manifestation of political action is the public commemoration of the Armenian genocide by the Ottoman empire held annually in Iran.

Azeri lawmakers, however, have a powerful bipartisan group in the Iranian parliament and have openly supported Azerbaijan in this conflict. Also, clerics representing Supreme Leader Ayatollah Khamenei in the four Azeri provinces, who are also Friday Prayers leaders and thus the highest official religious authority in their province, issued a public statement defending Azerbaijan's right to Karabakh.

Nonetheless, an important part of Iranian society composed of intellectuals, politicians and even the opposition, are concerned about the sentiments in the Azeri-populated regions of Iran that are usually labeled as pan-Turkist or separatist. They fear that both Turkey and Azerbaijan have actively been promoting such sentiments in Iran and consider it a threat to Iranian nationalism and national unity. This means that they are not keen to see Azerbaijan and Turkey coming out on top in this conflict.

In the last two weeks, several rallies have been held in support of Azerbaijan in the Azeri-populated cities of Iran. Local security forces have detained dozens of protesters. We do not know the extent of pan-Turkic influences on local public opinion due to censorship and repression. Unfortunately, the Iranian government and even many opposition intellectuals conflate those who simply want minority rights or the promotion of local culture and language with those who have radical pan-Turkic and separatist leanings. We should also note that being Azeri does in no way mean one is pan-Turkic. Many Azeris in Iran have been staunch advocates of Persian nationalism.

The religious dimension further complicates the situation. Azerbaijan and Iran are both Muslim countries with a Shia majority, and Islamic doctrines do not accept occupation of Muslim lands by non-Muslims. However, over the past two decades, Azerbaijan’s authoritarian regime has been concerned about the subversive potential of the Iranian version of political Islam and as a countermeasure has tolerated the promotion of Sunnism - reportedly with support from Turkey and Saudi Arabia. Shia clerics are deeply concerned about the Azerbaijani regime’s approach. Recent reports that Turkey has sent a unit of Syrian radical Sunni forces to Azerbaijan have added to these concerns.

Ironically, during the Karabakh conflict in the early 1990s, Iran also facilitated deployment of Afghan mujahideen, many of whom were Sunni, to help the Azerbaijani forces. But the perception of the Shia-Sunni divide has drastically changed since then.

This is where we can see that Iran’s game is based on its understanding of the balance of power in the region. As Baku and Tehran's relations have cooled and Azerbaijan has become closer to Iran's rivals such as Turkey, Israel and even Saudi Arabia, Iran has strengthened its relations with Armenia.

Is any internal friction likely?

There is an ongoing and lively public debate about what Iran's position should be. Azeri members of parliament and Khamenei’s representatives speak in defence of Azerbaijan but are equally criticised by other politicians and public intellectuals. Think tanks and the press regularly cover and publish different opinions and policy proposals on the conflict and what role Iran should play in it.

But this public debate does not mean that Iran’s official policy will change. Iran's position is no different from that of the1990s. Iran has stated that it recognises Karabakh as part of Azerbaijani territory, but that the dispute must be resolved peacefully, and the rights and security of the Armenians living there must be taken into account.

What do you make of the videos that have been shared on social media supposedly of weapons being taken to Armenia via Iran?

This is not the first time that Azerbaijani media has reported on the transfer of Russian weapons to Armenia from Iran. Iran has denied the allegations, claiming that the Armenia-bound trucks were carrying non-military goods. None of the videos show what is exactly being transported. Azerbaijan’s press also criticized Iran for having a minor role in the recent Kavkaz-2020 military exercise with Russia and Armenia. But they ignore the fact that Azerbaijan was invited and yet decided not to participate.

Iran prefers that there be no change in the balance of power in the Caucasus region. But this does not necessarily mean Iran would take a proactive stance against Azerbaijan.

Let's not forget that during the war of the 1990s Iran was more supportive of Azerbaijan, allowing thousands of Azeris to take refuge there. Iran is the only way that Azerbaijan can access part of its territory ie the Nakhchivan region, as well as the transit route with Turkey, and despite tiffs with the Azerbaijani regime over the years, Iran has allowed the transfer of people and goods.

With Rouhani speaking out on the conflict, might this signal greater involvement from Iran, and how would that play out?

Even if the Azerbaijani regime’s anti-Iran rhetoric intensifies, Iran’s policy will be to refrain from showing open and all-out support for either side of the conflict because both countries are Iran’s neighbours. Iran wants the war between Armenia and Azerbaijan to end as quickly as possible so that Tehran does not suffer the consequences.  On the other hand, Iran is worried that the longer the war lasts, the more regional and international actors will be drawn into the conflict zone. Iran is particularly concerned that Turkey could gain a foothold in the South Caucasus region.

Is talk of an Iranian-led peace plan credible? Or with some mortar shells falling within Iranian territory, might this lead to a wider escalation?

Iran has about 9,000 kilometres of land and maritime borders, of which only approximately 900 km (its border with Turkmenistan) have been relatively turmoil-free over the past 30 years. Iran's first priority is avoiding any escalation of conflict or being dragged into it.

At present, Iran is interested in playing an active mediator role, but on the one hand its political and diplomatic resources are limited because they are spent on other fronts, especially on its conflict with the US government. On the other hand, neither Russia, Turkey, Europe nor the US want Iran to be the leading mediator. In the 1990s, Iran actively mediated between Azerbaijan and Armenia, which even led to a short-lived peace treaty. But Tehran was later dropped from other mediation processes especially the Minsk Group. The optimal solution for Iran right now is what they refer to as 3+3 mechanism, that is the three regional powers (Iran, Russia and Turkey) lead the negotiations with the three Caucasian countries (Azerbaijan, Armenia and Georgia).

Giving Voice, Driving Change - from the Borderland to the Steppes
Armenia, Azerbaijan, Karabakh, Iran
Crisis, Diplomacy, Conflict
Connect with us