Inside the "Hague Hilton"

Rare glimpse of life inside detention centre where defendants are held during trials.

Inside the "Hague Hilton"

Rare glimpse of life inside detention centre where defendants are held during trials. 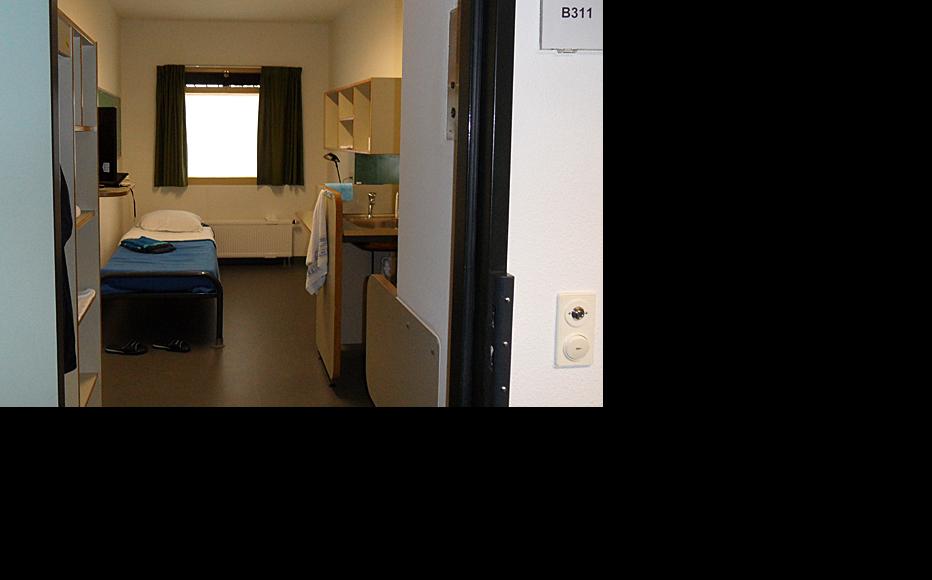 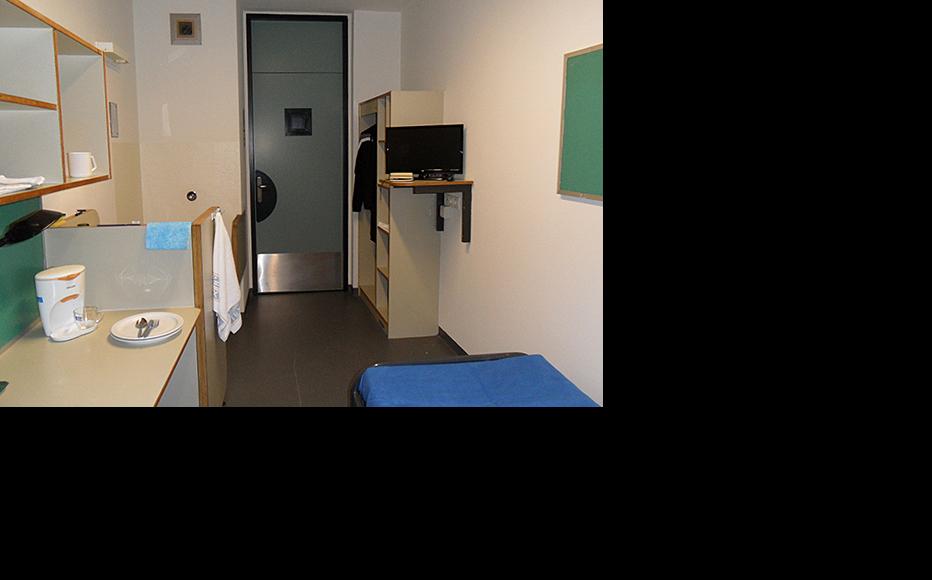 This cell looks lived in but has been fitted out to represent typical conditions for inmates. (Photo: Rachel Irwin) 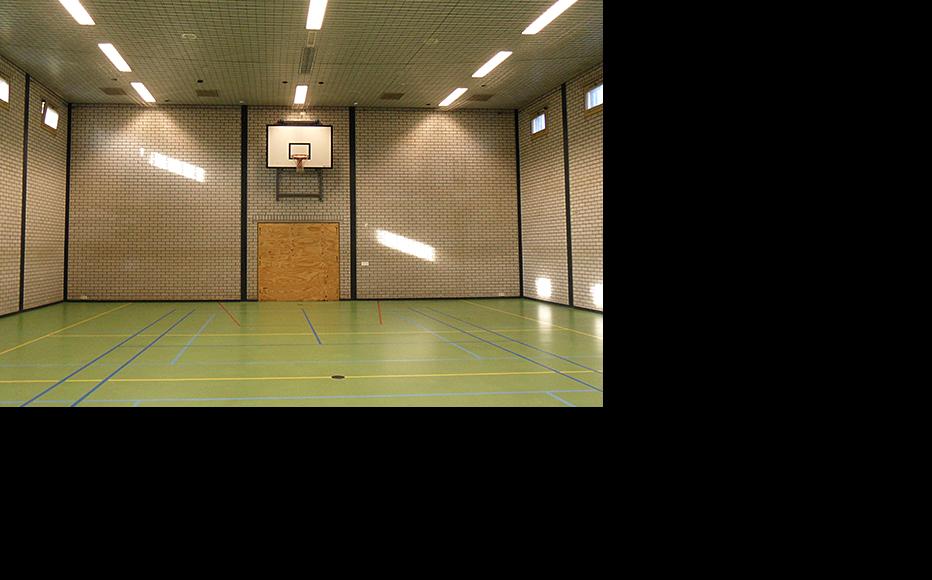 The gym hall at the detention unit. (Photo: Rachel Irwin)
The link has been copied

The bookshelf in the classroom was nearly full and included classics like Alice in Wonderland, Lord of the Flies and a Farewell to Arms. There were piles of magazines on the tables, including Time and National Geographic, a chalkboard, and a large world map mounted on the wall.

It was all quite ordinary save for the bars on the windows.

The students who use this classroom at the United Nations Detention Unit (UNDU) are alleged war criminals waiting out their trials and appeals process in The Hague. If convicted, they are transferred to another country to serve out their sentence.

The detainees are most often ex-politicians or military men from the former Yugoslavia. Two of the best-known residents are Radovan Karadzic, who was Bosnian Serb president during the Bosnian war, and Ratko Mladic, who commanded his army.

A fugitive for years, Karadzic grew a bushy white beard and disguised himself as a new-age healer in Belgrade prior to his arrest in 2008. A frail Mladic – a shadow of the burly army officer seen in wartime video footage – was finally apprehended in 2011 while hiding in a relative’s home in rural Serbia.

Both men are charged with a series of horrific crimes against Bosnian Muslims and Croats, including genocide, murder and extermination. They are alleged to have presided over the 44-month siege of Sarajevo, which killed some 12,000 people, and the 1995 massacre at Srebrenica, where more than 7,000 Bosnian Muslim men and boys were murdered.

I have sat through nearly every day of each of their trials at the International Criminal Tribunal for the Former Yugoslavia (ICTY) and listened to hundreds of hours of often gut-wrenching testimony. I am also familiar with the proceedings against a number of the other 27 current detainees at the UNDU.

Most are middle-aged, if not elderly. Some display a grim-faced determination in the courtroom – like 65-year-old Bosnian Serb army officer Zdravko Tolimir, convicted of genocide last year – while others use the proceedings as a showcase for their ego and political agenda. Long-term detainee Vojislav Seselj, for example, has accused judges of taking part in a “joint criminal enterprise” to remove him from political life in Serbia.

It is therefore incredibly bizarre to imagine any of these men sitting in English class reading Mrs Piggle-Wiggle – a childhood favourite I spotted in the library – or learning to throw a pot on a clay wheel, or doing sun salutations in the weekly yoga class. But apparently they do.

There is also a community garden, which is not being tended at the moment because “no one has particularly green thumbs”, said Mikko Sarvela, a bespectacled Finnish sociologist who is the commanding officer of the UNDU.

Detainees have access to computers, but no internet, he said. They are allowed visitors for seven consecutive days each month, and half of that time can be used for “intimate visits” with a partner. When a journalist on our media tour asked how many children had been conceived in the UNDU over the years, Sarvela said he didn’t keep a tally.

The wars in the former Yugoslavia may have been waged on religious, ethnic and nationalistic grounds, but the detainees have never been separated along those lines, unless the court has ordered it. They cook together using provisions purchased from the prison shop, play sports and celebrate special occasions together.

It has often been said that the UNDU is the only place where the peace accords that ended the Bosnian war actually work.

“There is a basic understanding not to discuss politics,” deputy commanding officer Fraser Gilmour said. He added that friendships had developed between detainees over the years regardless of whether they were Serb, Bosniak, Croat or Kosovo Albanian.

Sometimes, Gilmour said, having a common enemy in the shape of the prosecution was enough to overcome lingering animosities. The same is also true for rivals from the same ethnic group. During his closing arguments in 2012, Seselj said that he “fully respected” the “martyr’s death” of ex-Serbian president Slobodan Milosevic, who died at the UNDU in 2006 before his trial could be completed.

“We became friends during the time we socialised here; we had never been friends before,” Seselj said in court, although he made sure to emphasise that during the war, the only songs his paramilitary volunteers sang about Milosevic were “mocking” ones.

The prison complex is located in a leafy residential part of The Hague, not far from the North Sea. From the outside, it looks like an imposing medieval fortress. Most of the buildings inside the compound are for Dutch prisoners, including a stylishly asymmetrical canteen that, in a different setting, could pass for a small modern art centre.

The nondescript three-storey building that houses prisoners from the former Yugoslavia is shared with the African detainees facing trial at the International Criminal Court (ICC), but the ICC and ICTY inmates live in separate wings and rarely socialise. They do, however, share the classroom, as evidenced by the English-Kinyarwanda dictionary sitting on the table.

Prior to entering the facility, the commanding officer tells us that the UNDU does not smell or sound like a “normal prison”. What exactly does a normal prison smell like, I ask?

“Smoke, sweat and bleach,” he replies.

It’s true. The UNDU does not fit the stereotypes, at least of the American-style prisons so frequently depicted in popular culture. Once we get through the airport-level security and a series of locked doors, it is eerily quiet. There is little immediate sign that people actually live there. The guards accompanying us are very friendly, making conversation and offering us coffee.

The relaxed atmosphere is all the more startling considering the fact that journalists are rarely allowed inside and our visit has obviously disrupted the regular routine.

We were permitted to take photographs during the tour, but only in designated areas, and UNDU staff reviewed our memory cards before we left. We had to agree in writing to various other terms and conditions. There were two security guards minding me and one other journalist on the tour, plus two tribunal staff members, and the commanding officer and his deputy.

The first stop was the gymnasium, with a basketball hoop, goal posts and three exercise machines. It looks like a standard school gym, except – once again – for the bars on the high-up windows. The detainees get an hour in here every day, and sometimes play matches with the guards.

“Now we go to the penthouse,” Sarvela quips as we crowd into the elevator to go up to the residential wing. Glancing at the elevator buttons, I notice that one of them says “Air Cage.” The commanding officer is very keen to stress – lest we get the wrong idea - that this is not a literal cage, but an enclosed space where detainees can still get some fresh air.

We are not allowed to visit the wing where the detainees live. The hour we spend at the facility is timed to coincide with a period in which they are all locked up in their cells.

Instead, we get to see one of the empty wings, which is apparently identical to all the others except that the common-room is more sparsely decorated. Rather than the tables, chairs and TV that would normally occupy the space, there is a large ping-pong table. With the low ceilings, blank walls and glaring overhead lights, it does feel quite drab – so much so that we are not allowed to photograph it.

As we enter the hallway, the guards unlock two cells for us to inspect. Each narrow room is fitted with a single bed, a desk, a flat screen TV, a sink and a toilet (only partially enclosed). All detainees have their own cells.

Even though no one is staying in this wing at the moment, there are clothes hanging in the closet and a tea maker on the desk, along with two white plates and cutlery, stacked just so. Perhaps the most peculiar aspect of this attempt to simulate a lived-in cosiness is a pair of navy blue slippers next to the bed.

The whole place reminds me of a university dormitory, and this may be one of the reasons why the UNDU is often referred to a bit sneeringly as “The Hague Hilton.” The detainees don’t have their freedom, but they seem to have just about everything else.

Not surprisingly, Sarvela declines to say how much money the UN spends on the detainees, their activities or the top-notch medical care they receive. He stresses that the unit runs so smoothly because he and his colleagues respect the detainees, and they in turn respect the staff.

“We don’t have to count the knives after each meal,” deputy CO Gilmour says.

This is, I think, partly why the UNDU is the object of such fascination and – to a certain degree – morbid curiosity.

One would assume this is the kind of place where every knife would be counted. But instead, even the inmates charged with the worst possible crimes learn to paint watercolours and do yoga to ease the symptoms of post-traumatic stress disorder.

“We see this as the detainees’ home,” Sarvela says. “We want it to be as peaceful as possible.”