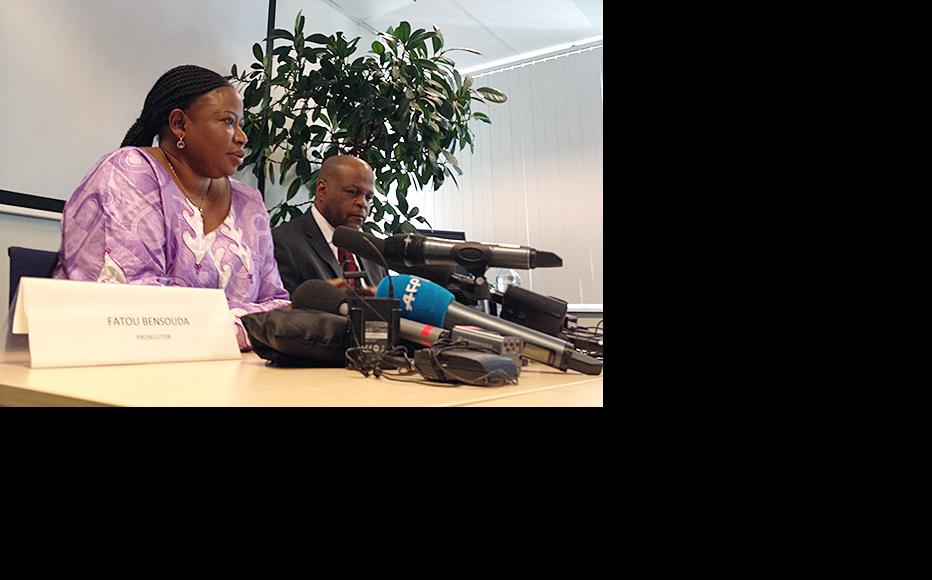 ICC Prosecutor Fatou Bensouda speaking to the press after prosecutors in The Hague charged Walter Osapiri Barasa for “corruptly influencing” the testimony of three protected witnesses in the case against Deputy President William Ruto and former journalist Joshua Arap Sang. (Photo: Matthew Rhodes, IWPR)
The link has been copied

The International Criminal Court (ICC) has issued an arrest warrant against a Kenyan journalist for bribing or attempting to influence prosecution witnesses in the ongoing case against the country’s deputy president.

Prosecutors in The Hague have charged Walter Osapiri Barasa, 41, from Eldoret in the Rift Valley for “corruptly influencing” the testimony of three protected witnesses in the case against Deputy President William Ruto and former journalist Joshua Arap Sang.

Ruto and Sang are currently on trial at the ICC for orchestrating attacks in the Rift Valley region in the aftermath of a disputed presidential election in December 2007.

They face charges of murder, persecution and population displacement. The wave of violence from December 2007 to early 2008 left 1,100 people dead and forced 650,000 others from their homes.

The arrest warrant against Barasa was issued confidentially on August 2 this year, but only made public on October 2.

According to ICC Prosecutor Fatou Bensouda, prior to making the warrant public, efforts were made through a third country to arrest Barasa, but those efforts were unsuccessful.

Prosecutors accuse Barasa of bribing or attempting to bribe witnesses referred to as P-0336, P-0536 and P-0256.

They say they have evidence that he offered to pay witness P-0336 between one million and 1.5 million Kenyan shillings (17,000 US dollars) not to testify on behalf of the prosecution.

Barasa is also accused of offering to bribe another witness, P-0536, who is currently in The Hague testifying against Ruto. Prosecutors say he offered this witness and her husband a total of 1.4 million shillings to withdraw her evidence.

Bensouda says she has evidence that Barasa used witness P-0336 to try to persuade witness P-0256 to withdraw her testimony.

Judge Cuno Tarfusser noted in the arrest warrant that, according to the prosecution, “Walter Barasa had requested P-0336 to call and look for P-0256 with a view to persuading her to recant.”

Barasa previously acted as an intermediary for the ICC prosecution in its investigation in Kenya.

In their application for an arrest warrant prosecutors told judges that attempts to interfere with its witnesses had "escalated both in frequency and seriousness" between May 20 and July 25, 2013.

Under rules that govern the ICC, judges can issue an arrest warrant where that is deemed necessary to ensure a suspect attends trial, to make sure he or she does not obstruct investigations, or to prevent the ongoing commission of the crimes charged.

The judge agreed with prosecutors that in Barasa’s case, all three conditions were met.

Bensouda told journalists in The Hague on October 2 that Barasa was not the only individual suspected of interfering with her cases in Kenya.

“Our investigations indicate that there is a wide network of people involved in this scheme,” the prosecutor said. “We continue with our investigations and we will present our findings to the judges as soon as we are ready.”

Asked by journalists what level of officialdom was involved, Bensouda said she did “not know yet”.

“We are talking here about individuals who are doing this, not government,” she said later.

Bensouda called on the Kenyan authorities to arrest Barasa and hand him over to the ICC.

Her office has repeatedly accused the Kenyan government of failing to cooperate fully with its investigations in the main cases against its leaders – an allegation Kenya denies.

Bensouda said that now the warrant was public, Kenya could show its compliance.

“Sending this warrant to Kenya now is an opportunity for the Kenyan government to demonstrate the cooperation that they say they have been giving to the ICC,” Bensouda said. “This is an opportune moment to arrest Barasa and surrender him to the court.”

A statement from the office of Kenya’s attorney general, Githu Muigai, said the enforcement of the arrest warrant was subject to procedures under the country’s International Crimes Act of 2010.

“These procedures require the minister in charge of the interior, upon receipt of the formal warrant of arrest, to present the said warrant to the judiciary for enforcement,” the statement read. “The final determination on the enforceability of the warrant is therefore a judicial one.”

In a statement to the media, Barasa has denied the charges.

In the statement, he outlined his contact with certain witnesses in his capacity as an intermediary for the Office of the Prosecutor.

Barasa contends that witness P-0536 told him a different version of events from that which she gave to the court’s prosecutors.

“[I] am ready and prepared to defend myself against these allegations, which are false,” Barasa’s statement said.

“I have special knowledge of all the investigators’ machinations relating to the recruitment of this witness 536 and others, and I will not be blackmailed to tell lies,” it said. “I respect the court, I respect the rights of the accused persons to a fair hearing and the victims’ right to get justice, but I do not accept coercion and unorthodox means of implicating accused persons and conducting investigations to attain an unjust end.”

JJ Wangui is an IWPR reporter in Nairobi. Matthew Rhodes is an IWPR intern in The Hague