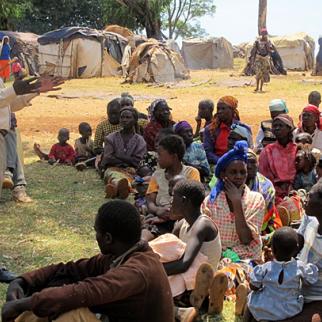 Some of those uprooted by the 2007-08 violence in Kenya's Rift Valley still fear going back home. (Photo: IWPR)

Winning electoral team held up as model of ethnic cooperation, but that isn’t quite reflected on the ground.

Now that two Kenyans indicted by the International Criminal Court have been elected to run the country, observers warn that the court will face an uphill task in keeping people informed about the issues involved in the forthcoming trials.

Uhuru Kenyatta was elected as Kenyan president and his running-mate William Ruto as vice-president in the March 4 election. Together with a third suspect, Joshua Arap Sang, the two men face trial at the International Criminal Court, ICC, on charges of orchestrating the violence that erupted after the last presidential election in 2007.

More than 1,100 people were killed and 650,000 lost their homes when the dispute over the poll outcome led to mass violence. Ruto’s trial was set to start later this month but the ICC has said it will announce a new date in the coming weeks. Ruto’s lawyers have asked judges to delay the case until November to give them more time to prepare. Kenyatta’s trial is due to get under way in July, although judges have asked his lawyers to submit arguments about a later start date.

Back in 2007, Kenyatta and Ruto were on opposite sides of the political and ethnic battle lines. Kenyatta draws significant support from his own Kikuyu ethnic group while Ruto has a huge following among the Kalenjins. These two communities are the largest in the Rift Valley region, which saw the worst of the bloodshed in 2007-08.

For the March election, Kenyatta and Ruto put ethnic divisions behind them and joined forces as the Jubilee Coalition. As a result, they won massive support among Kikuyu and Kalenjin voters in the valley.

Although a strong sense of injustice persists in the Rift Valley, the ICC is likely to find it harder to get its message across in this part of Kenya. Uhuru and Ruto have pledged to continue cooperating with the court, but they have actively opposed its work in Kenya. Since their election, many residents of the Rift Valley have said justice is no longer a priority for them.

“Before the polls, it was a bit easier to talk about ICC issues,” said John Ngetich, a human rights activist based in the Rift Valley, “but now that Uhuru and Ruto are in office, the situation is even more complicated because the people who are supposed to be informed about the Hague process are the same ones who are supporters of the two [suspects].”.

Cornelius Korir, Catholic bishop of Eldoret, who has worked with many families affected by the 2007-08 violence, told IWPR that the challenge the ICC faced was how to explain why it was pressing on with criminal proceedings against two figures who were not only greatly admired, but who had just been democratically elected.

“As much as the information about the ICC process may be relevant and important, many people want to move on,” Bishop Korir told IWPR. “They have elected Uhuru and Ruto to office, meaning they have confidence in them and are ready to listen to them more than [to] anyone else.”

Korir’s assessment is borne out by interviews with Rift Valley residents who view the ICC process as redundant, even if longstanding differences between Kikuyu and Kalenjin persist.

Mercy, a woman from the town of Eldoret in Kenya’s northern Rift Valley province, told IWPR that she had faith that Kenya’s new leaders would bring about reconciliation between communities.

“We do not need [the ICC] now, because we have elected Uhuru and Ruto so that they help to reconcile us and I think we can now move on without the ICC,” she said.

Supporters of the ICC like David Busienei, director of the Centre for Community Dialogue based in Eldoret, say the ICC needs to be doing more to raise its profile in Kenya and make people aware of the judicial process it is pursuing.

“The gaps in terms of information flow from the ICC still exist, and even as the cases come up many Kenyans are hungry for information on the entire process… investigations, confirmations hearings, trials, [victim] participation, and the fate of victims among other issues,” Busienei said.

Twists and turns in the ICC’s Kenyan cases have resulted in the original six suspects being reduced to just three.

In January 2012, judges only confirmed cases against four of the six individuals who were initially summoned by the court the previous year. In March 2013, the ICC prosecutor was forced to drop one of the remaining cases after a witness admitted lying.

The complexity of these developments has made it easier for the ICC’s opponents to spread disinformation.

According to one woman who suffered in the violence five years ago, “The [ICC] outreach team has not had a sustained way of giving out information to the public, and there should be a shift in its approach because the more situations change in the country, the [more the] need for factual information also grows.”

The ICC’s spokesperson in Kenya, Maria Kamara, played down concerns that the ICC would not be well received in the Rift Valley in the wake of the March election.

She said that since the election, her office had received “several requests” from leaders among the Kalenjin and Kikuyu communities to continue outreach activities in the region.

“They are just waiting for the green light from me to commence planning,” Kamara told IWPR by email.

In a separate interview, Kamara said the ICC’s intervention in Kenya would continue irrespective of the political process and any reconciliation efforts.

“During our outreach sessions, we have always explained to the public about the independence of the court and that the cases will be handled independently and professionally by the judges,” she said.

Kamara said the court did its best to respond when issues were raised, although there were limitations to what it could say.

“There are so many queries and issues on the ICC, especially through the social media, but we cannot engage in exchanges on some of the information particularly that touch on issues like security of witnesses. We have to consult and only respond to what is necessary,” she said.

Since it started its investigations in Kenya in 2009, the ICC has faced significant challenges in making its work understood locally. As soon as the then prosecutor, Luis Moreno Ocampo, announced formal charges in March 2011, he was criticised for focusing on a few senior figures who were not seen as representative of the extent of the crimes committed.

As the March election approached, Kenyatta and Ruto portrayed the charges as an indictment of their respective communities, rather than of specific individuals.

Despite the challenges, Kamara believes that the ICC’s outreach team has done valuable work, with events in various regions including the Rift Valley.

“We have had very successful awareness activities during which we did answer most of the common questions Kenyans have been asking about the process,” Kamara told IWPR after one event in Eldoret held prior to the election.

Kamara said the outreach unit had developed a good relationship with the Kenyan press.

“We have had a very good working partnership with the media,” Kamara said. “We have been working closely with the [Kenya] editors’ guild, reporters and various national and community media houses and we hope to continue the working relationship in the days to come.”

The long-drawn-out nature of the ICC process has contributed to the flagging interest. By the time the first trial starts later this month, it will have been three-and-a-half years since the court launched its investigation.

“Many Kenyans hadn’t foreseen such a prolonged wait, and the ICC outreach team has to sustain the flow of information so that people do not lose hope in the process,” Busienei said.

Kamara accepts that it has been a long process, but she says the court’s staff have made efforts to explain why that is.

“Even though it has taken some time, we are now receiving fresh invitations from communities to continue with outreach, because Kenyans want to get more information and still want to work with us and get knowledge on ICC,” she said.