Defenders of Hague court point out that it does not have a mandate to support local justice systems.

Defenders of Hague court point out that it does not have a mandate to support local justice systems. 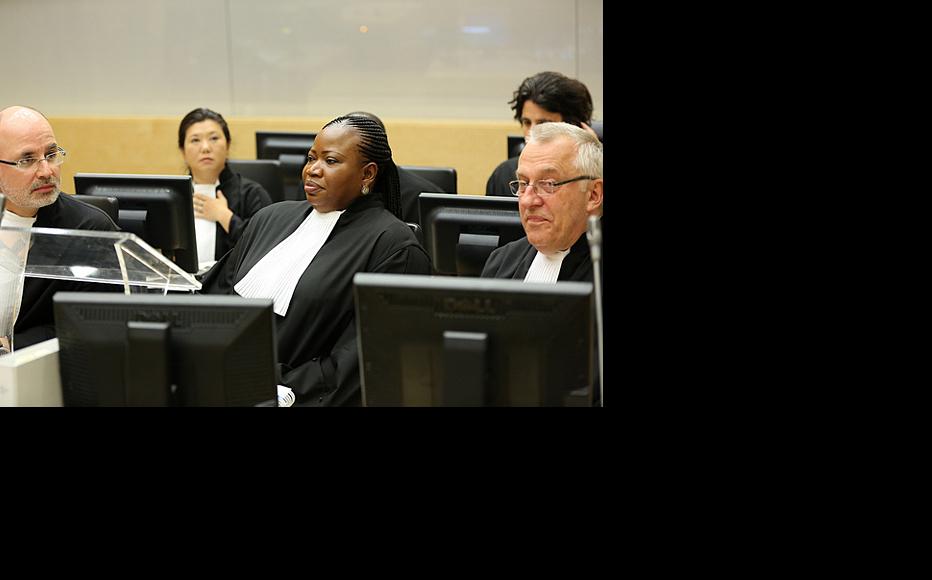 Chief Prosecutor Fatou Bensoda (centre) at the opening of the trial of Kenya's Deputy President William Ruto and journalist Joshua Arap Sang in September 2010. (Photo: ICC-CPI)
The link has been copied

After senior Kenyan officials accused the International Criminal Court (ICC) of doing too little to help the national courts improve, legal experts said that was not its job, and in any case the local judiciary had not been receptive to change.

Kenyan attorney general Githu Muigai claimed last month that the ICC had done “nothing in return” to help the state prosecute low- and mid-level perpetrators of the mass violence that followed a disputed presidential election in December 2007.

Muigai was speaking at the annual meeting of 122 states that back the ICC, known as the Assembly of States Parties.

The ICC has charged three individuals in Kenya, including President Uhuru Kenyatta and Deputy President William Ruto, with orchestrating the 2007-08 violence. The trial of Ruto and journalist Joshua Arap Sang started in September, while Kenyatta’s trial is scheduled to start on February 5, 2014.

These cases stem from the ICC’s decision in 2010 to launch an investigation into Kenya. While Hague prosecutors focused on a small number of high-level suspects, there was an expectation that many more would be tried by the national judiciary.

Furthermore, there is provision for the ICC to help local court systems improve to a point where they would be able to prosecute similar crimes occurring in the future.

Prosecutors from the former Yugoslav states have worked in the ICTY prosecutor’s office in The Hague and taken valuable expertise back home. Rwanda’s domestic courts also received a boost via the ICTR, based in the Tanzanian town of Arusha.

“Compare the ICC and the ICTR in Rwanda,” Kenya’s Director of Public Prosecutions (DPP), Keriako Tobiko, told the November 20-28 ASP conference. “Rwanda is now able to prosecute genocide suspects because they were assisted to build their legal and institutional framework. ICC has done zero in Kenya in that regard, yet that is among the things we would demand and expect from the court.”

Legal experts, however, say that unlike those other courts, the ICC does not have an official mandate to provide this kind of support.

James Stewart, deputy prosecutor at the ICC, acknowledged that the court had done little in this regard in Kenya, but said this was not what the ICC is for.

“We don’t have a budget for it, and we are told by those who fund us – in this case the Assembly of States Parties – to stay within our mandate,” Stewart told IWPR. “However, we find ourselves on different occasions working very closely with national authorities to encourage them to take action, and we are prepared to share expertise and experience with local prosecutors and police.”

Aside from the ICC’s restricted mandate, experts on international justice point out that Kenya has to date demonstrated little appetite for conducting prosecutions of lower and mid-level perpetrators of the 2007-08 violence. This, they say, makes it very difficult for the ICC to provide even informal support if it senses a lack of political will in the country.

Njonjo Mue, a Kenyan lawyer and an expert on transitional justice, told IWPR that the lack of progress on prosecutions at national level has given the ICC little reason to invest in improving the country’s judicial system.

Rather than making genuine efforts to prosecute suspects, he said, the Kenyan authorities had focused on “bashing” and “mud-smearing” the ICC.

“Building such local capacity is not mandatory, it’s not a mandate of the ICC, but the court may feel encouraged to help if Kenya was showing interest – by for instance showing true and genuine willingness to prosecute the middle and low-level perpetrators, and also cooperate with the ICC [in the cases against Kenyatta, Ruto and Sang],” Mue said. “But that has not been coming out clearly.”

Prosecutors in The Hague have repeatedly voiced concerns that the Kenyan government is not cooperating sufficiently with ICC investigations.

In the latest example, the Office of the Prosecutor wrote to judges on December 2 informing them that the Kenyan government had failed to hand over Kenyatta’s financial records as it requested as far back as April 2012. It asked judges to rule that Kenya had failed to meet its obligations to the court.

“The net effect of the [government’s] inaction has been to limit the body of evidence available to the chamber, hindering its fact-finding function and ability to determine the truth,” Prosecutor Fatou Bensouda said in the submission.

The Kenyan government has denied allegations that it is uncooperative. Tobiko told IWPR that he had provided a substantial amount of evidence to ICC prosecutors.

“I also opened all these files to officials from the prosecutor’s office who camped in my office for days, combing through them,” Tobiko said. “This still is not cooperation enough, according to the ICC. They have done very little – in fact nothing – in return to assist the Kenyan domestic institutions and agencies to build their capacities.

“Complementarity is supposed to be a two-way traffic, but in our case, it appears like a one-way street.”

The government also cites cases where suspects have faced justice for the electoral violence. In February 2012, Tobiko established a task force to examine more than 5,000 criminal cases. Of that number, the DPP reported earlier this month that 1,000 had been prosecuted, resulting in 500 convictions.

The DPP’s office has said previously that the vast majority of criminal cases lacked enough evidence to be sent to court. No measures have been taken to re-investigate these cases.

Speaking at the ASP meeting, Reverend Samuel Kobia, the head of Kenya’s Judicial Service Commission, acknowledged that the number of prosecutions had been “very, very few indeed”.

If the government had made credible efforts to prosecute suspects locally, it could have ensured that Kenyatta, Ruto and Sang went on trial in Kenya rather than in The Hague. Furthermore, if it had acted early enough, the ICC would not have launched its investigation in the first place. The ICC prosecutor gave Kenya the option of setting up a local tribunal, rather than relying on the ICC, but the country’s parliament twice rejected the proposal.

Experts like David Donat Cattin, director of the non-government group Parliamentarians for Global Action, point out that if Kenya had made a real effort to pursue its own prosecutions, it would have more of a right to demand ICC support.

“Complementarity is about ending impunity for the crimes in question and Kenya didn’t do it for many years,” Donat Cattin said. “Now they are saying they are doing it, but where are the proceedings? Where are the trials?”

But the ICD has not yet been set up, and even when that happens, it is still unclear whether it will be used to prosecute cases stemming from the 2007-08 violence.

Experts agree that once the ICD is operational and in a position to carry out credible investigations and prosecutions, the ICC might consider stepping in to help.

“The big question is whether the ICD will be able to independently and credibly function without [political] interference, as we know of Kenya,” Mue said. “If that happens, I don’t think the ICC would have a problem lending a hand at the appropriate time. All Kenya needs is to demonstrate willingness.”

Joseph Akwiri is a freelance reporter in Mombasa.