I Can Still Smell the Blood

I Can Still Smell the Blood 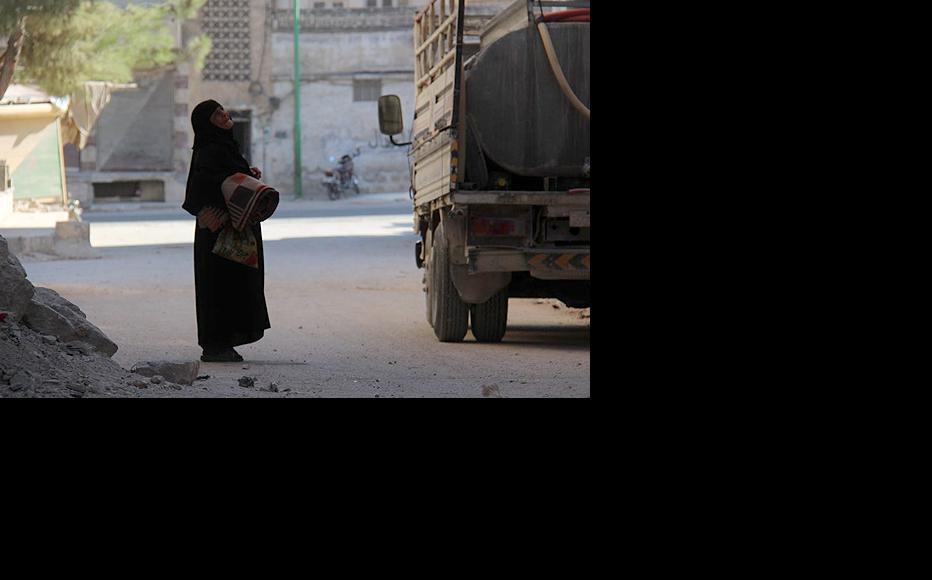 An elderly woman waiting for the water tanker to ask for supplies for her house. (Photo: IWPR)
The link has been copied

My family and I were having lunch on the afternoon of  September 15, 2013 in our home in the city of al-Tabqah when we heard the sound of distant shooting.

My little sister Nada asked my father, “What’s going on? What’s that sound?”

“Only God knows, my daughter, continue eating,” he replied, but he was clearly concerned. I felt that my father knew what was happening but didn’t want to say anything.

A few minutes after we finished lunch, we heard shooting again.

The sound was getting louder and louder, as if the shooters were approaching our house. I began to panic and felt myself trembling.

My older brother Mohammed went out on the balcony and screamed in a shaking voice, “Come and see what I see!”

We all rushed to the balcony. My father was the first one to arrive, followed by my mother. After seeing what they saw, my parents didn’t let us go out to the balcony.

My mother’s eyes filled with tears she was unable to hide. My sister and I begged my father to let us take a look but he positioned himself between us and the balcony door. He stood in silence by the door of the balcony to stop us going outside while my mother closed all the windows.

My brother could keep quiet no longer and said, “How can they do such a thing, are they human beings? They can’t be!”

I was curious and thought it would be impossible for them to hide what was happening right under our house.

“Brother, tell us what you saw,” I asked him.

“Human heads cut off, and thrown in the street,” my brother said in a painful voice.

My father shouted at him. “Shut up, why did you speak?”

“They will know eventually,” my brother replied.

I was shocked. I burst out crying and said to my father, “What does he mean by ‘cut heads’? Human heads? Tell me!”

Time passed inside our house, we were all in shock. Later I went to my sister Nada and said, “Let’s go to the balcony and see what they saw.”

I didn’t dare to do it on my own, especially since my father and mother had forbidden us.

Evening came quickly and again we heard the sound of heavy gunfire.

This time I realised that the shooting was coming from right in front of our house, which overlooked the public square.

I heard a voice shouting, “With the help of God, we cut off the heads of these al-Assad pigs!”

This time I didn’t wait for anyone’s permission to go to the balcony. I ran towards it, too fast to allow anyone to stop me.

“Don’t go onto the balcony,” my father shouted at me as I wrestled with the door.

I turned for a moment and said to him, “I have to go out, I want to understand what’s happening.”

As soon as i stepped out onto the balcony, my body was paralysed with fear.

I saw dozens of people in black clothes, their faces covered with black masks. They were carrying real human heads.

Even as I write this now,  I can smell the blood I smelled that day.

The men grabbed the severed heads by the hair, waving them to the right and left and almost playing with them as they chanted, “God is great!”

A true horror movie was being enacted in front of me.

I went back into the house and began sobbing loudly. It was the first time I had seen Islamic State fighters.

My father came and hugged me, saying, “So, my daughter, this is why I was trying to prevent you from going out to the balcony.”

I was 16 years old. To this day I can’t forget those moments.

Haneen al-Mohammed, 19, was a student in al-Tabaqah in the Raqqa countryside before the conflict forced her to move to the Idlib countryside.