Rate of shelling has fallen since United Nations team arrived in the area, but locals fear government forces will hit back with a vengeance when monitors leave.

Rate of shelling has fallen since United Nations team arrived in the area, but locals fear government forces will hit back with a vengeance when monitors leave. 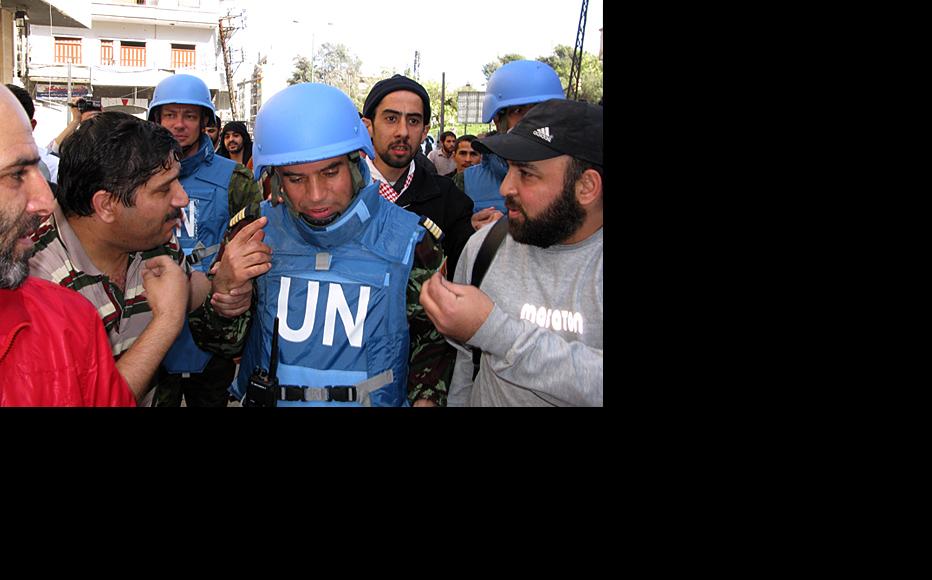 Moroccan army colonel Ahmed Himmiche, head of the UN Military Observers team deployed in Syria, is approached by Homs resident as he and his officers patrol the city. (UN Photo/Neeraj Singh)
The link has been copied

United Nations monitors have arrived in the central Syrian province of Homs as part of the deal brokered by UN-Arab League envoy Kofi Annan. IWPR Arab Spring editor Daniella Peled asked Abu Bakr, the pseudonym of a 22-year-old citizen journalist and local opposition spokesman in the Baba Amr district of Homs city, to describe how things look on the ground.

There has been no firing during the day, although every evening there are big blasts. There are still many snipers in the Bab al-Siba district who kill people on the streets, and today in the outskirts of eastern Talbisa [nearby town] there was renewed shelling. On one road near Baba Amr, there is a big regime checkpoint, and soldiers were hiding tanks there today. I don’t know why – maybe the UN observers are going there.

Has the ceasefire had any effect in Homs? What happened after the UN monitors arrived?

We think the observer mission will be a failure, but there have been advantages. There has been less killing – before they came, [President Bashir] al-Assad’s forces shelled us with one rocket every ten minutes, and now we are hit by two or three in the evening.

Before the observers arrived, there was heavy shelling all over Homs, not just in one or two places as there is now. After the observers came, there were fewer explosions.

I am located near Baba Amr and the observers did not come here, they just entered the city centre [of Homs], and in the countryside they went to a couple of places. We didn’t see any observers around here, we don’t know anything about them, but we think there are two here.

What do you think will happen once the monitors leave?

There has been a difference before and after the observers came here. But when they go, we think we will be going to hell. All the people here think the observer mission will fail, and when they leave, the regime will shell all of Homs every minute. Not every hour – every minute. It will be like when the Arab League observers left Baba Amr [in December 2011] and the Syrian regime started shelling us.

Baba Amr is just destroyed rubble and buildings. There is no life here, there are no people here, just hundreds of soldiers.

The mission will serve to give Assad and his regime more time to kill the opposition. They have given Assad three months to allow 300 observers to enter, but that is a long time, and he will just kill more people. The number is still very, very small, even to observe every neighbourhood in Homs. In Homs alone we need more than 3,000 – every street here has a checkpoint for regime soldiers, and every day they make arrests and snipers kill more people.

If you don’t believe the Annan plan is going to work, what are the alternatives?

We need a safe corridor to get our families – the women and children – out of the completely militarised place Homs has become, to get them to any safe place. We need guns and heavy weapons, military supplies to defend ourselves. We just need military support. We don’t need food or anything else, just weapons to protect ourselves through the Free Syria Army [FSA].

In Homs, the regime uses RPGs and Kalashnikovs every day to fire on houses from the checkpoints. It’s like a provocation to the FSA. But the FSA doesn’t have the heavy arms to respond.