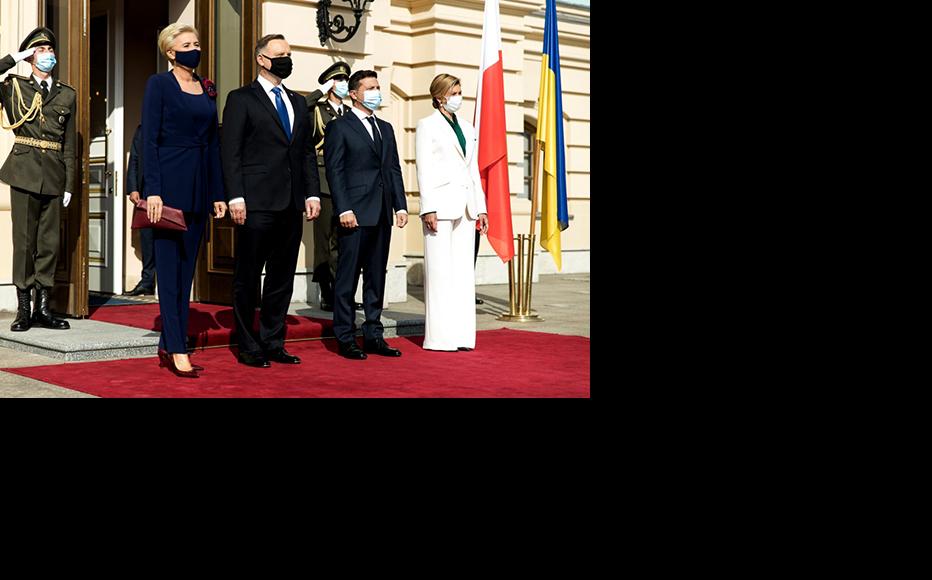 President Volodomyr Zelensky and President Andrzej Duda during the latter's visit to Ukraine in October. (Photo: President of Ukraine's Official Site)
The link has been copied

Historic tensions between Kiev and Warsaw continue to affect their strategic partnership, despite recent attempts to heal the wounds of the past.

Ukraine and Poland have long struggled to reconcile differences over historical narratives dating from WWII, with mass wartime graves on both sides of the border coming to symbolise this dispute.

A visit by Polish president Andrzej Duda to Kyiv on October 12 was marked by commitments to resolve long-standing issues around the identification and preservation of these burial sites.

But analysts warn that progress remains slow, despite the two countries having wide ranging and shared interests.

At the heart of the matter is historical memory. Figures such Stepan Bandera, the leader of the far-right Organisation of Ukrainian Nationalists (OUN) and who was killed by a Soviet agent in Munich in 1959, continue to be held up as patriotic symbols in Ukraine.

For most Ukrainians, Bandera and the OUN continue to symbolise the fight for independence, particularly following Russian aggression against Ukraine in 2014.

For many Poles however, these figures were war criminals responsible for atrocities including the 1943-44 Volyn massacre of Poles living in a Ukrainian region which was part of Poland until 1939.

The Ukrainian Insurgent Army, which fought against both the Third Reich and the USSR during World War II, killed up to 100,000 Polish civilias there.

In 2016 the Polish parliament unanimously voted to categorise this as a genocide, a move which angered Lyiv as Ukraine considered the events in the context of a war in which crimes were committed on both sides.

In 2017, Jaroslaw Kaczynski, the leader of Poland's ruling Law and Justice party, summed up the issue when he said that “Ukraine will not join the EU with Bandera”.

Nonetheless, Poland has consistently supported Ukraine’s European aspirations. According to a 2017 Kantar poll, 87 per cent of Poles view Ukraine as a European country, a proportion far higher than elsewhere in the EU.

Yet controversies over the past continue to hold the two countries back in wider areas of cooperation.

“During Ukrainian-Polish meetings, 80 per cent of the discussions were dedicated to historical issues,” said a senior Ukrainian diplomat on condition of anonymity. “As a result, there was simply no time for anything else, neither security nor trade, and not any other humanitarian issues.”

Tensions grew further with the rise of right-wing sentiments both in Ukraine and Poland, where the Law and Justice party came to power in 2015. In Poland, residents living of regions adjacent to Ukraine tend to be staunch Law and Justice supporters.

Political analyst Galina Zelenko said that this swing rightwards in both countries had significantly different causes.

“If in Ukraine this increase was a response of society to the war, in Poland it was the result of disappointment from EU membership and resentment that the Polish voice was not decisive in Brussels,” Zelenko told IWPR.

The situation was further aggravated in 2017 by the so-called war of graves, when burial sites and memorials were vandalized in both countries.

Some two dozen incidents were recorded in Poland, with the turning point coming when a monument at Poland’s Grushovitsky cemetery was demolished by the regional authorities.

After that, the Ukrainian Institute of National Memory decided to declare a moratorium on the search for and exhumation of Poles killed during WWII.

“We had no choice; this step was made to stop the wave of the dismantling of Ukrainian gravestones in Poland and it worked,” said Volodymyr Vyatrovich, the former head of the Ukrainian Institute of National Memory and currently a lawmaker from the opposition European Solidarity party.

In 2017, Duda visited Ukraine and agreed a plan with his counterpart to resolve the issue, which quickly collapsed after it emerged that the parties had different interpretations of the agreement.

Ukraine insisted that Kiev would lift its moratorium only after the restoration of the memorial on Mount Monastery, near the village of Verhrata and not far from the border with Ukraine.

This was the only one of the destroyed monuments included in the Polish register of military burials, and therefore subject to protection.

The Polish side argued that most of the gravestones supposedly marking where Ukrainian partisans were secretly buried during the war had been erected in the 1990s or even 2000s and were only symbolic markers, rather than actually identifying burial sites.  This meant that they were not protected under the law prohibiting the destruction of war graves.

Warsaw also argued that the first step should have been the lifting of the moratorium, and remained hesitant about restoring the destroyed gravestones.

Following this abortive summit, the number of bilateral visits by high-ranking officials fell, while communication at the ministerial level - even between the heads of the ministries of defence - also decreased. The implementation of infrastructure projects between the two states was also frozen.

Poland viewed Volodymyr Zelensky’s victory in the 2019 Ukrainian presidential elections as an opportunity for a breakthrough in relations.

“The new president came from a region not affected by the Ukrainian-Polish confrontation; his electorate also did not live in western Ukraine,” said Polish historian and political scientist Lukasz Adamski. “This gave hope that he was more ready to compromise on historical issues than his predecessor.”

Indeed, during his first visit to the Polish capital, Zelensky announced the lifting of the moratorium.

And further progress was made during Duda’s visit to Ukraine on October 12, his first since 2017.

On the eve of his arrival, the Mount Monastery memorial was restored, although not to the degree the Polish side had requested. Nonetheless, the visit resulted in a statement that emphasised bilateral priorities and identified joint steps to strengthen cooperation.

“This is not an easy path,” Zelensky said. “But it is important that we are ready to pass it together and take mutual steps forward.”

Giving Voice, Driving Change - from the Borderland to the Steppes
Ukraine
Diplomacy, Reconciliation
Connect with us