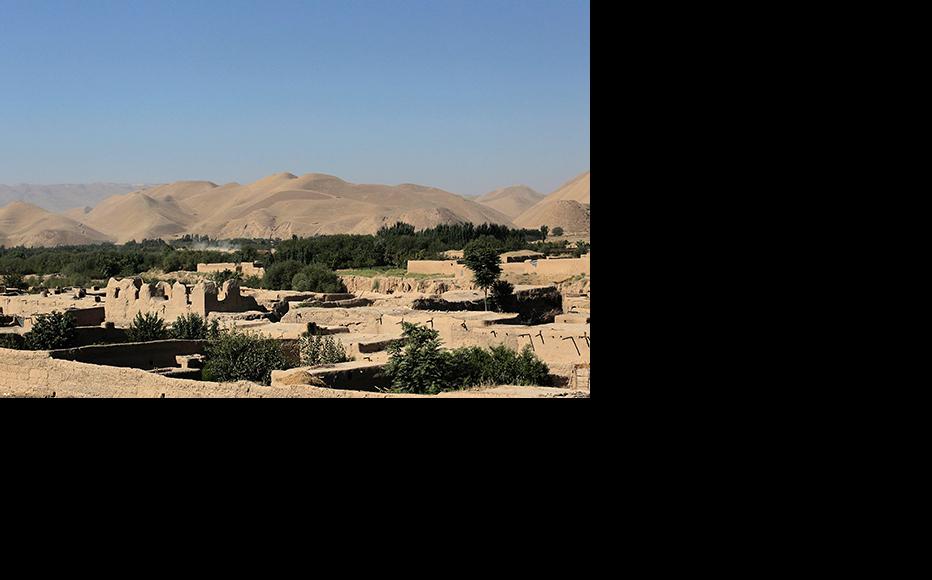 The north-western province of Badghis has many ancient sites and remains. (Photo: Chris Hondros/Getty Images)
The link has been copied

Officials in the eastern Afghan province of Badghis are warning that priceless archaeological treasures face destruction without urgent steps being taken to preserve them.

Locals say that the scenery and archaeological treasures of the north-western province could match those of Bamiyan, a famous site for domestic and even international tourism.

“At least 60 historical sites and tourist attractions have been identified and registered in this province,” said Sayed Ariz Shaida, acting director of Badghis’s department of information and culture, adding that some had been listed as national heritage sites.

Despite this, he continued, each year only around 200 domestic visitors visited Baghdis’ areas of natural beauty, religious shrines and ancient monuments.

These include the fort of Qala-e-Nariman, located high in the mountains 25 kilometres from the provincial capital Qala-I-Naw, which is believed to date from the time of Genghis Khan.  Elsewhere, archaeological remains around the village of Morichaq in Bala Murghab district are at least 1,500 years old.

Other historic sites include the ornate tomb of Ghiasuddin in the village of Langar of Qadis district, by tradition the burial site of a descendant of Imam Ali, while the remains of the Shah Mashhad madrasa in Jawand district, discovered in 1970, are a rare example of an elaborately decorated brick structure from the Timurid period.

However, officials say that many of these are located in areas controlled by the Taleban, and it remains impossible to visit them. Poor security also meant that the extensive looting of artefacts across many of the sites risked damaging them permanently.

Abdul Awal Habibi, the head of art and culture in Badghis province, explained that local people took advantage of the wet winter weather to dig around historic sites such as Nariman Qala to find antiquities which they then transported to Pakistan and even further afield.

“The smuggling of historical artefacts out of this province by local powerbrokers has become a real headache for the authorities,” Habibi continued.

There was no dedicated local museum to house archaeological treasures already unearthed in Badghi, he continued, with some shipped to the neighbouring province of Herat or in storage in the provincial capital Qala-i-Naw.

“Since 2010, about 60 pieces of ancient art from this province have been stored in the Herat museum, with about 50 other items still in Badghis,” he said.

For his part, Shaida claimed that the ministry of information and culture had not allocated any funding for the restoration of Bagdhis’ historic sites for the last 16 years, since the 2001 fall of the Taleban.

This meant that as well as looting, other sites were dangerously dilapidated due to a lack of maintenance or had been harmed in battles with insurgents.

Morichaq, for example, suffered serious damage in October 2016 when the Taleban seized control of the area.

Cultural analyst Habibullah Murghabi said that, across Afghanistan, the government had failed to address local history and tourism in more remote provinces. This failure of imagination meant that valuable resources were being wasted and national treasures at risk of destruction.

“If conditions continue the same way for another two years, these beautiful and important of these monuments will be seriously threatened,” he said, adding that there were many practical steps the government could take to exploit these resources.

“The best way to revive the tourism industry and help it flourish is to ensure security, to restore and maintain historical monuments, to publish magazines and brochures featuring tourist attractions and to create modern tourism infrastructure,” he said. “This includes the construction of hotels, parks, amusement and sports centres, with tour companies that can provide advice and guidance.”

Baghdis had attracted such visitors in the past, he continued, adding, “Badghis often hosted local tourists as well as visitors from countries including Nepal, Japan and Sweden, etc, who used to spend several nights staying in castles and forts and photographing them.”

Indeed, locals say that the scenic area of Abpoda in Jawand district could be turned into a national park like Bamyan’s famous Band-e-Amir. The Pistaleq mountain range, famous for its pistachio orchards and spectacular views, could also be a national asset as well as major economic resource.

However, lawlessness has played a part in damaging these natural resources too. The Pistaleq mountains were once covered with more than 90,000 hectares of pistachio trees, but local powerbrokers have appropriated so much land that the nut trees now only cover 30,000 hectares of land.

Elsewhere in the province, the eye-catching rocky Band-e Sabzak mountain range, covered with evergreen trees, has also suffered as a result of deforestation.

Some local officials say that they have not given up hope of boosting the potential of the province’s  natural beauty.

Sharaf-ul-din Majidi, director of the governor of Badghis’s office, said that they were currently drawing up a plan to revive the local tourism industry.

“The local government is considering allocating a building to serve as a museum to preserve the 110 ancient artefacts that are currently in Herat museum and in Qala-i-Naw,” he said adding that his department was scheduled to meet officials from the department of information and culture in order to formulate a plan for the restoration of historic monuments. This would be included in the 2019 budget.