Female entrepreneurs argue they could achieve much more with extra governmental assistance.

Female entrepreneurs argue they could achieve much more with extra governmental assistance. 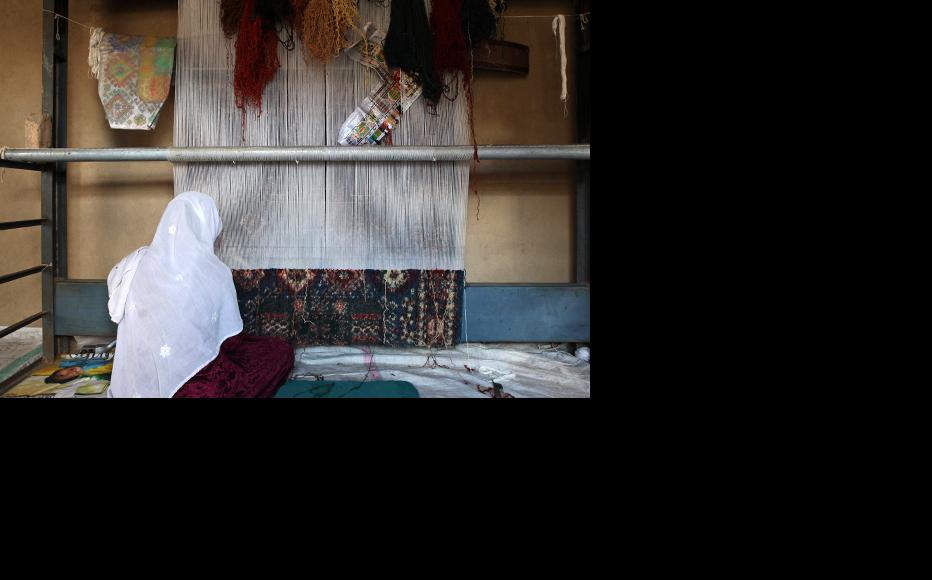 An Afghan woman weaving a rug. (Photo: Heidi Agostini)
The link has been copied

A year ago, Telaya Rawak was all set to open a business producing women’s clothing. But from day one, she and her six female employees faced one problem after another.

Men dominate the business world in Afghanistan, and Rawak said that even sourcing appliances for her six female employees to use had been a struggle.

“Buying the sewing machines was difficult in itself because in every shop we went to, the men tricked us and sold us either very expensive or poor quality things goods,” she said. “We had so many difficulties buying appliances. We took the machines back to the shops several times.”

Finding suitable premises was another problem.

“We wanted to rent a shop and so we went to a shopping centre in Herat located in the business district of the city,” she said. “But the centre’s owner refused to talk to us because he is a religious scholar and we are women. When we went to his office, his secretary would not let us enter and said that he neither talks to women nor rents them shops.”

Rawak had little choice but to base her operations in Khadija-tul Kubra, a dedicated market in Herat for businesses run by women. However, it has few customers as it is in a residential area and far from other shopping centres. Sales are poor, she said.

Rawak is just one of many businesswomen in the western province who say that social prejudice and a lack of state support makes it nearly impossible for them to compete with men.

Women have made significant progress in recent years in the field of entrepreneurship, but still face massive challenges in accessing capital as well as national and international markets.

Critics say that government steps to support female-run businesses, such as establishing Khadija-tul Kubra, had not gone far enough.

Sadiqa Tamsaki, another shop-owner in the women-only market, said that she and her fellow female entrepreneurs were perfectly capable of succeeding in business. They just needed a minimal level of support.

“If the government shows determination and moved this centre to another location in the city, we would easily be able to compete with men,” she said. “We are no less capable than they are, and our creativity and our products are great. Unfortunately, it’s just that the conditions were operate under aren’t appropriate.”

“Women don't work alongside men because social norms put pressure on them to restrict their movements, and also because they have fewer financial resources and less knowledge of economics,” she said.

“There are still traditional issues; women working outside the home is considered a bad thing, and people’s beliefs are governed by prejudice. All this restricts women’s access to work.”

However, religious experts say that there is no theological basis to prevent women working in business.

“There is a huge body of commentary about business in Islam, and nowhere does it say that men can do business but not women,” he said.

Shafiqa Sherzad, who owns a handicrafts store in the Khadijat-ul Khubra centre, said that the outlook was dire.

“Our sales are down compared to last year, and we are all about to go bankrupt,” she said, adding that they had no government help at all.

“We call on the government to support us, do something for us. Otherwise, our situation will just get worse,” she said.

Male business leaders in Herat argue that they are already trying to improve conditions for female entrepreneurs.

“We believe in positive change for women,” said Sa'ad Khatibi, head of the Herat chamber of commerce and industry

“In various trade exhibitions, we provide them with booths and stalls for free so that they can show their products. Moreover, we have taken their goods to international exhibitions."

Khatibi said that there were few accurate statistics regarding female-owned businesses, but said that he believed women played the most active part in the handicrafts and agricultural sectors, particularly in the production of saffron.

Ali Kawah, a sociology lecturer at Herat university, said that this narrow range was part of the problem.

“Allocating simple tasks to women such as sewing or selling handicrafts prevents them from getting involved in more profitable businesses,” he said.

Kawah added that what he described as “male control of the market” meant that women fundamentally needed additional help.

“Economics is an extremely challenging field and women can lose what small share they have in business unless they are supported by the government and other international organisations,” he said.

Wahid Wahabzada, an economics lecturer at Herat university, agreed that women needed special measures to enable them to succeed in the field of business.

“Lack of capital, good management, and governmental support are the reasons why… products produced by women have such low sales in both national and international markets,” he said, adding that measures including tax cuts and foreign investment could boost women’s economic activity.

“Because women have little financial capital, it would be better for them not to be taxed so as to encourage them, and the best thing would be for them to be given some financial incentives from the government,” he continued. “Bank loans could also help them raise capital.”