The sector is providing a good living for many disadvantaged women.

The sector is providing a good living for many disadvantaged women. 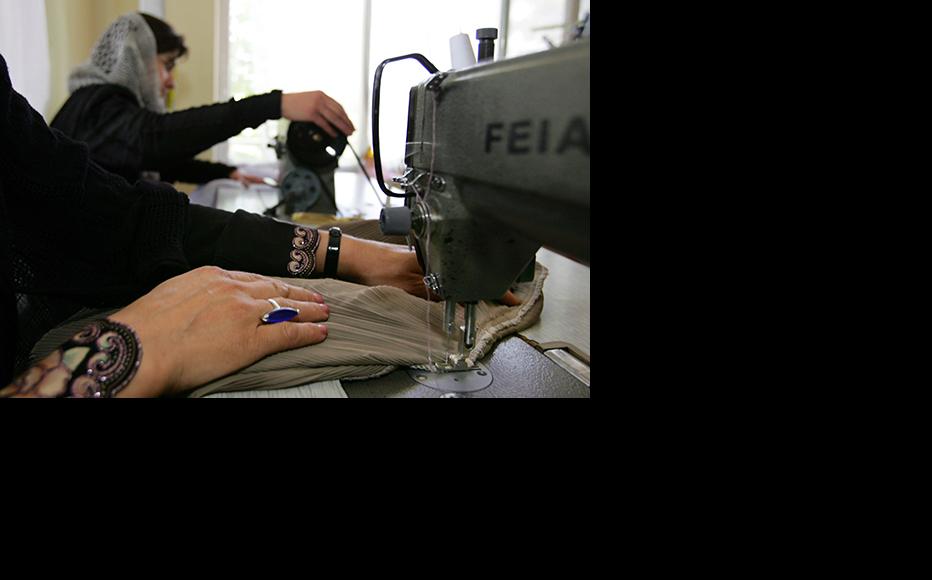 An Afghan woman takes part in a sewing workshop. (Photo: Paula Bronstein/Getty Images)
The link has been copied

Standing proudly behind her market stall in Sheberghan city, Noor Bibi continued to smile despite the freezing weather.

The 34-year-old, whose husband died two years ago, said that she was making a good living from sewing and selling local handicrafts and could finally provide for the needs of her five young children.

“For the last year I have been making and selling hand-sewn items and am so happy that I am both earning money from my own efforts and that I’m able to support my fatherless children,” she said.

This was a marked contrast to the past where she had only managed to earn money through occasional laundry work or even begging, she said, adding “My four small daughters and one son are all now in school.”

Locals in the northern province of Jowzjan say that the handicrafts industry is experiencing a revival, providing a valuable source of income for many women.

Training provided by both the local government and NGOs had developed sewing and embroidery skills amongst mostly illiterate local women.

There are around ten organisations currently working in Jowzjan’s handicrafts training sector, focusing on hand-sewing, tailoring, applique, embroidery, cotton and mirror-work, as well as on making the distinctive karakul hats.

More than 500 women are being trained in this field, with some 600 having already completed their courses and already producing work for sale.

One woman, Nasibah, said that after only three months working in this sector, she could now afford to cover her entire family’s expenses.

The 27-year-old said that holding workshops for women like her would make a huge contribution to their self-sufficiency, adding, “Now I want to train other women, and I call on anyone who can help me to support me in finding a suitable place.”

The International Psychosocial Organization (IPSO), funded by the German foreign ministry, has been working with Jowzjan’s department of information and culture since 2014.

The institution has trained more than a hundred women displaced by war in skills including embroidery and mirror work, as well as creating exhibitions where these goods can be displayed and sold.

“The condition of women in the province has improved in recent years,” said John Mohammad Habibie, the IPSO head in Jowzjan province. “They’ve learned embroidery and found the right market to sell their products.”

He continued, “We have focused on the embroidery of hats for both men and women, on scarves, and even over fabric or canvas shoes so that a new generation can also use these skills.”

Officials from Jowzjan’s department of women’s affairs also welcomed the revival of the handicrafts industry, and said that they had been able to run literacy courses alongside some of the workshops.

“This department is working to provide women with jobs and find the right market for their products,” said Najibah Qureshi, director of the department for women’s affairs.

Qureshi added that the Maymana women park which was currently under construction would not only provide a safe space for socialising but also would include facilities to sell such handicrafts.

“We have identified a number of shops in the market where women can continue to market and sell their handmade products so they can ensure good sales,” she said.