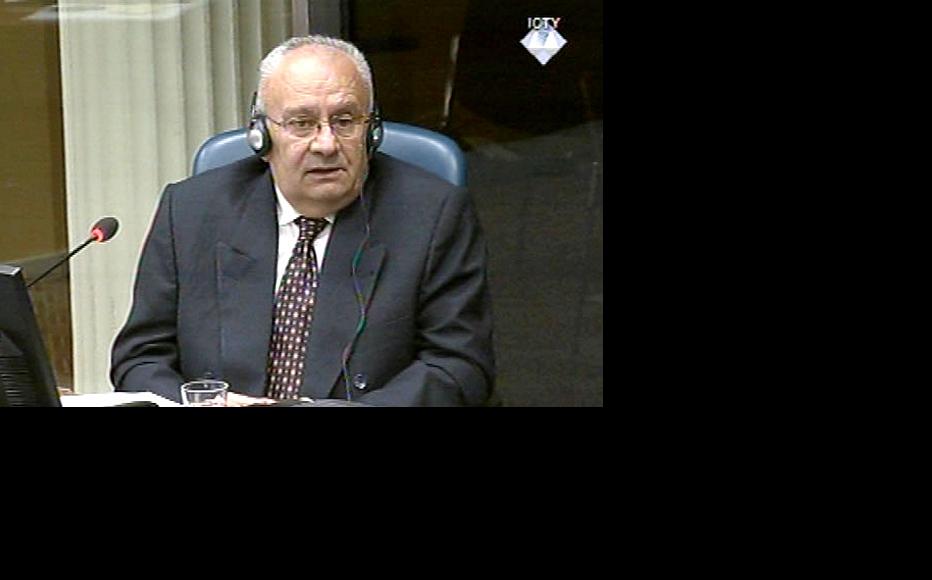 Borislav Bogunovic, prosecution witness in the Goran Hadzic trial at the ICTY. (Photo: ICTY)
The link has been copied

The final prosecution witness to testify against former Croatian Serb politician Goran Hadzic told judges this week that he could not be sure that previous testimony he gave at the Hague tribunal had been accurate.

Borislav Bogunovic held the position of interior minister in Hadzic’s wartime government. Tribunal prosecutors explained that he had recently been sentenced to 20 years in prison for killing his girlfriend, which is why he had been unavailable to testify before the prosecution officially rested its case last year.

Bogunovic appeared as a witness this week to confirm the testimony he gave in 2010 in the trial of former Serbian intelligence officials Jovica Stanisic and Franko Simatovic, who were subsequently acquitted of all charges.

The witness told Hadzic’s defence lawyers that he could not remember meetings in Serbia which he had previously testified about, in which he and Hadzic allegedly received detailed instructions from the authorities in Belgrade, as well as equipment and arms.

“It often happens that I, while reading something, think of something completely different. I cannot with certainty say whether I said something that was not true, but there is a possibility that this happened. Not a huge possibility, but it’s still there,” the witness said.

During the war in Croatia in the early 1990s, Hadzic held senior political positions in the country’s Serb-controlled regions. He was head of the government of the self-declared Serbian Autonomous District of Slavonia, Baranja and Western Srem (SAO SBWS), and later president of the Republic of the Serbian Krajina (RSK) – which absorbed SAO SBWS territory – from February 1992 to December 1993.

Hadzic is charged with 14 counts of war crimes and crimes against humanity committed against Croats and other non-Serbs, including persecution, extermination, murder, imprisonment, torture, inhumane acts, cruel treatment, deportation, wanton destruction and plunder.

He is alleged to have been part of a “joint criminal enterprise” together with various other political and military officials, its purpose being the “permanent forcible removal of a majority of the Croat and other non-Serb population from approximately one-third of the territory of the Republic of Croatia” in order to create a Serb-dominated state.

The witness justified discrepancies in his testimonies and gaps in his memory by saying he had been troubled since the death of his girlfriend.

The defence then tried to show that Bogunovic’s 2010 testimony had been based on assumptions, and that Serbs in Croatia organised themselves in 1991 in order to resist Croatian nationalism, not with the aim of removing non-Serbs.

The prosecution responded by showing the witness video footage of his 2010 testimony in which he described in great detail how he and other officials had received uniforms and arms “identical to those that Serbian police forces had”.

He was also shown footage in which he talked about “five or six” meetings between Hadzic and Milosevic in 1991 in Belgrade, which Stanisic also attended.

“I heard from Hadzic what was going on,” Bogunovic said in his 2010 testimony. He also said that he himself met Stanisic “three or four times” in 1991 in order to arrange the creation of Serb police forces in the Croatian villages of Dalj and Borovo Selo, as well as the delivery of arms, uniforms and equipment.

When asked whether his previous testimony had been accurate, Bogunovic said it was the Yugoslav People’s Army and the Serbian police that had been responsible for events in eastern Croatia.

“[Hadzic’s] government was primarily dealing with the economy,” he said.

Bogunovic also talked about Radovan Stojicic, known as “Badza”, who in 1991 was both an aide at Serbia’s interior ministry and a commander in the Serb Territorial Defence force in the east Croatian town of Vukovar.

“I was told I had to keep in touch with him, since he was from the Serbian ministry of internal affairs. He came there to help organise both police and defence forces. I said OK, but I knew from the beginning that we would not be able to cooperate efficiently,” the witness said.

Prosecutor Lisa Biersay showed the witness evidence that Stojicic was a member of the joint criminal enterprise described in the indictment, but that crucial decisions in rebel-held territories were made by Hadzic, including those relating to the appointment of police commanders in Serb-held parts of Croatia.

“I want to show you a document. Do you recognise this name at the bottom – Goran Hadzic? So this document was not signed by Badza, was it?” Biersay asked, displaying a document relating to the dismissal of a police commander in Vukovar.

The court also heard statements that Bogunovic previously made in which he said Stojicic/Badza had arranged a meeting in Novi Sad in 1991 between himself (Bogunovic), Stanisic and Hadzic.

The prosecution argued that this proved there had been cooperation between the government of Serbia and Hadzic’s rebel government in Croatia.

Hadzic’s defence case is scheduled to begin on June 24.

Serbia, Croatia
Connect with us