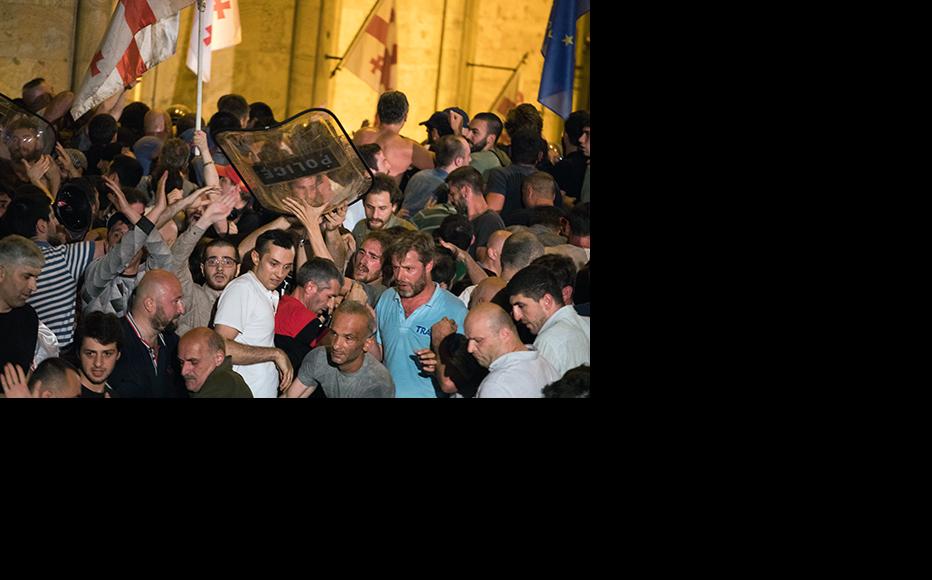 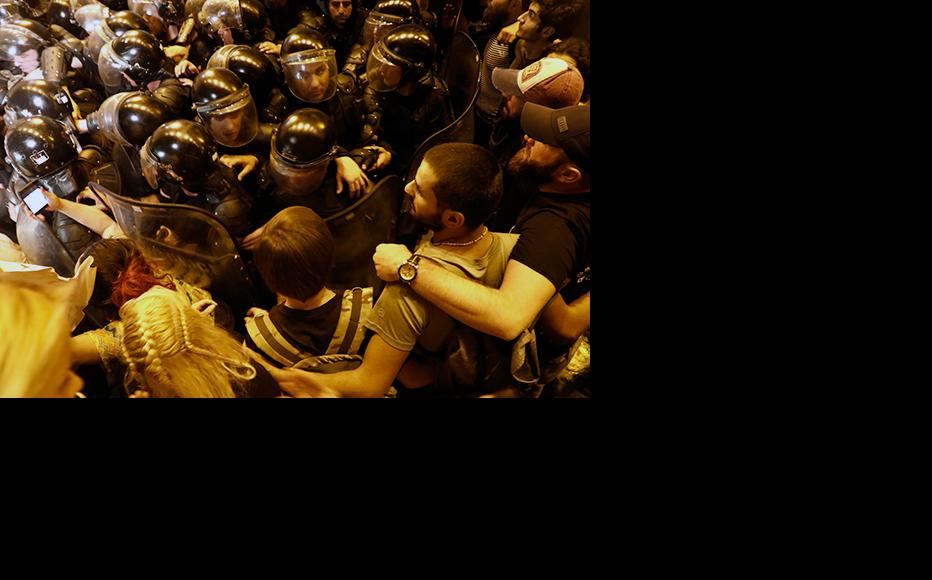 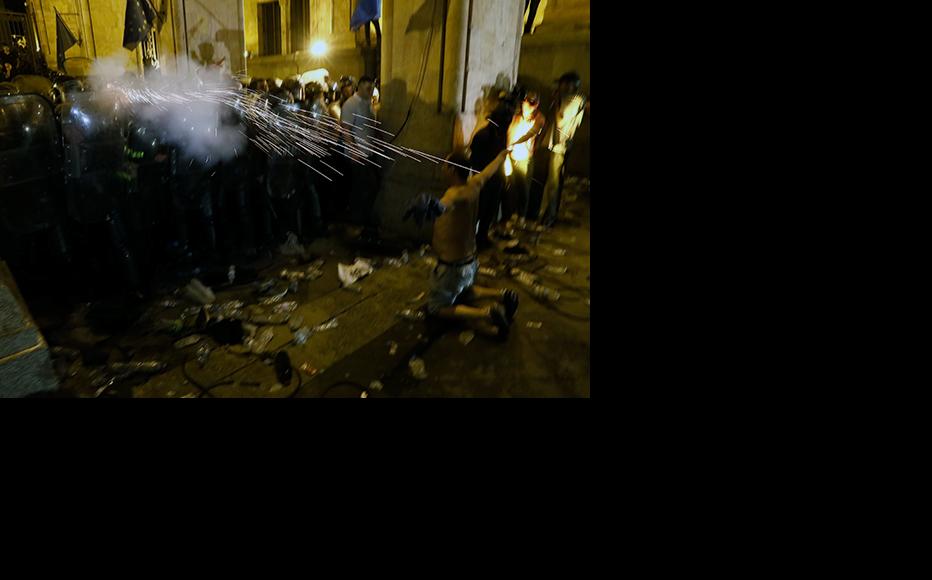 A man kneels in front of riot police as they shoot rubber bullets into the crowd. (Photo: Guram Muradov, Civil.Ge) 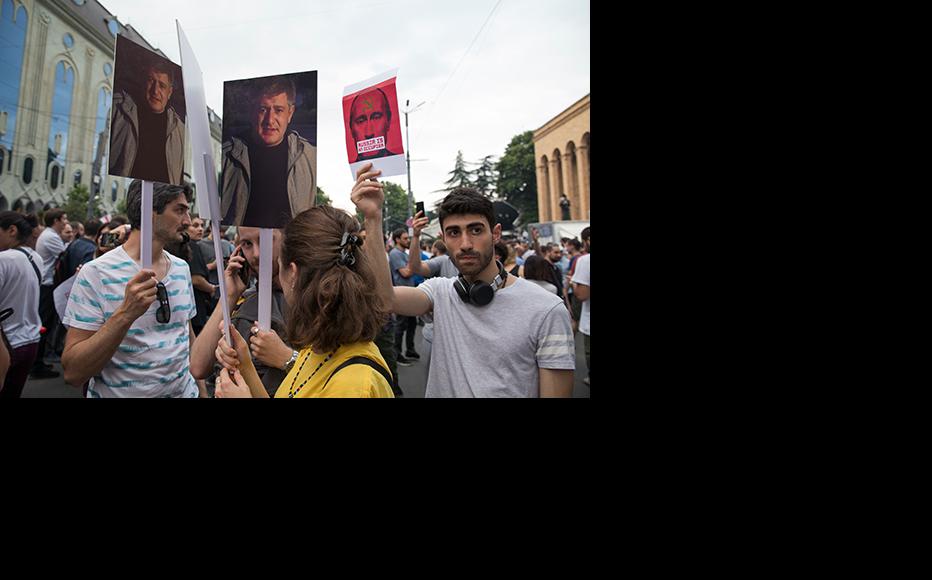 Protesters hold photos of Giga Otkhozoria, who was murdered in break away Abkhazia, and whose case remains unsolved. (Photo: Guram Muradov, Civil.Ge) 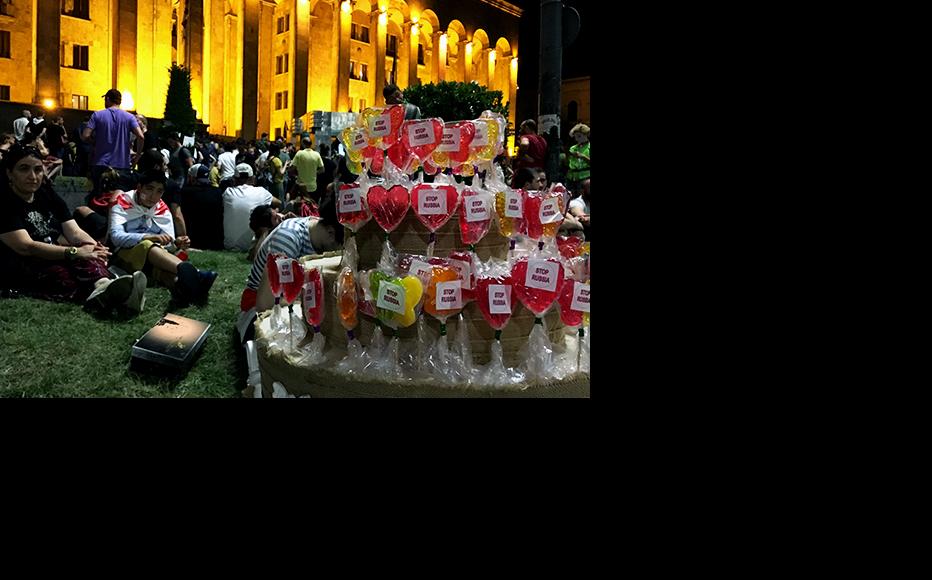 Lollipops being sold with the label ‘Stop Russia’ in front of Parliament. (Photo: IWPR) 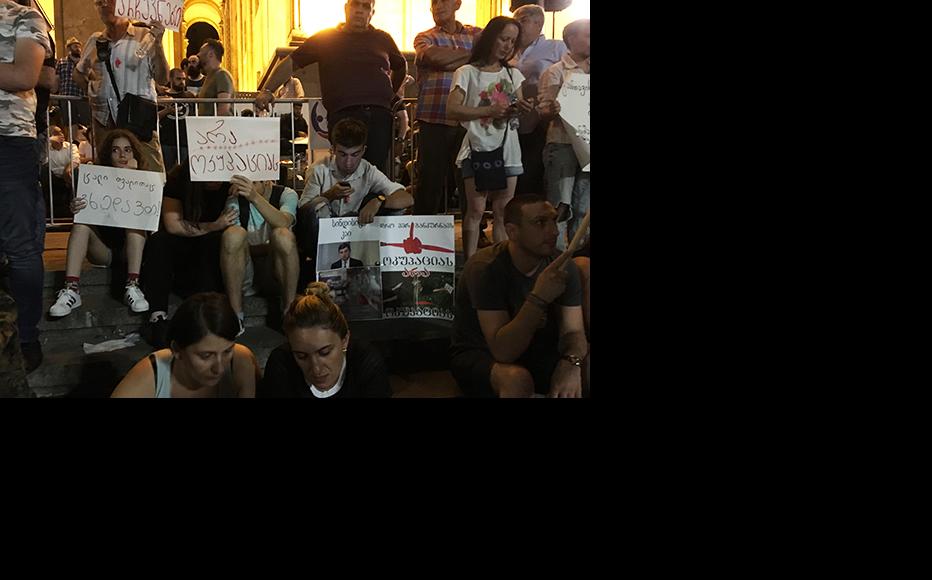 Banners from left to right read: “I can see you with one eye too!” “No to Occupation” and “Time won’t heal occupation, no to occupation!”. (Photo: IWPR) 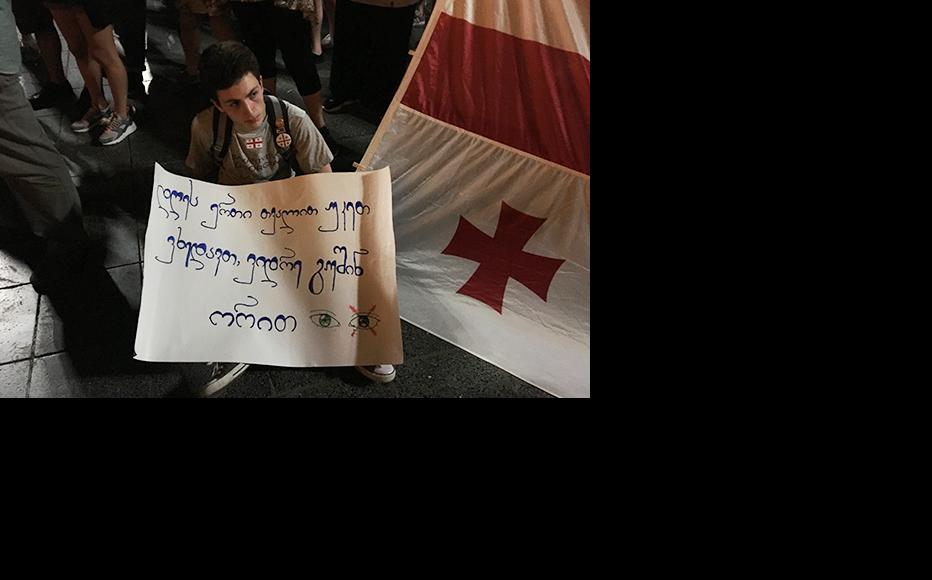 Protester with a banner reacting to police targeting protesters’ eyes “Today we see better with one eye, than we did yesterday with two”. (Photo: IWPR)
The link has been copied

The ruling Georgian Dream party have agreed that 2020 elections will be conducted through a proportional voting system, acceding to a key demand of anti-Kremlin protestors who continue to rally on the streets of Tbilisi.

The unrest was sparked by an official visit by Russian parliamentarian Sergei Gavrilov during which he sat in the chairman of the parliament’s seat, a move perceived as a direct insult against Georgia’s sovereignty.

The protests come after years of resentment over Russian interference in Georgian politics and ongoing outrage over the military occupation of the breakaway regions of Abkhazia and South Ossetia. The build-up of Russia’s military presence in the Tskhinvali region has in recent years also affected the lives of many Georgians living close to the dividing line.

“I went to the protest to show the government that there are red lines that cannot be crossed,” said one demonstrator, Giorgi Babunashvili. “I could not stand aside while a Russian Duma lawmaker sat in parliament.”

According to Ghia Nodia, a political scientist at Ilia State University, the protests also came against “a background of discontent” with the ruling party’s perceived incompetence.

“The chances of Georgian Dream being defeated in the next parliamentary elections increases sharply in a proportional system,” he noted.

Sopho Verdzeuli, director of the democracy and justice programme at the Human Rights Monitoring and Education Centre, agreed.

“I think these protests are a manifestation of accumulated grievances,” she said. “It appears that the topic of occupation is something that has the most resources to unite different groups. But the main factor that drove this many protesters to the street was the sense that the government is ignoring them.”

The government response to the unrest has also served to fuel public anger. Hundreds of people have been injured since the demonstrations began on the evening of June 20 and  protestors insist they will continue to meet until their demands are met, including the resignation of several senior politicians and the release of all those so far detained.

More than 300 people have been arrested, and 121 people are still being held on charges of hooliganism.

Tamta Kakhidze, a lawyer and analyst at Transparency International Georgia, alleged that the government had not followed due process in charging the protestors.

“The arrested individuals did not have the opportunity to present evidence,” she continued. “In most cases, the sanctions were defined based on the testimony of the policemen only. The cases were heard in very little time. The demands of the arrested individuals to postpone proceedings with the aim of gathering evidence were not met. The state has the obligation to present convincing evidence of offence to the court, such as video footage, or testimony of witnesses, which did not happen in most of these proceedings.”

On the first night of the protests, dozens of people were hospitalised after riot police fired rubber bullets and tear gas at the protesters. In total, 240 people have been reported injured, at least two of whom lost an eye. According to official government sources, this figure included 80 policemen.

The ministry of interior claimed that protestors exceeded the laws on freedom of speech and became violent, after which proportional force was used to prevent further unrest.

According to a statement of the Office of the Prime Minister of Georgia, “the honest popular protest... was used by destructive political forces who overstepped constitutional boundaries. The revanchist opposition attempted to instigate mob violence and to storm the parliament building”.

But Amnesty International called for an “immediate, thorough, and independent” investigation into police actions during the protest. Nodia said that police had exploited attempts by the crowds to gain access to parliament.

“During a protest rally in the evening of June 21, a radical part of protesters tried to force their way into the inner yard of the parliament building,” he said. “That gave the government a legitimate ground to use force, but it was done in a totally unacceptable way. Police fired rubber bullets, literally turning it into a man-hunt operation that extended far away from the parliament building.”

Many journalists were among the injured, which some media workers argued had been deliberate.

“Journalists claim they were targeted by the police even after they clearly stated that they represented media organisations,” the Georgian Charter of Journalistic Ethics self-regulatory body said in a statement. “We call on the government and the ministry of interior to ensure the safety of journalists and allow them to carry out their professional duties.”

According to the Charter, 33 journalists were injured. Guram Muradov, a photojournalist for civil.ge, was among them.

“Mostly it was us journalists who were standing together where I was, and as a result, we were heavily injured, which gives the impression that we were in fact targeted,” he said. “I’m now trying to figure out what condition the other journalists are in. I have 11 wounds on my back, and one on my hand. On my back, when I was shot I felt the pain all over, which leads me to think that I was hit with something similar to a bullet that shatters into pieces,” Muradov concluded.

Russia has also been piling on pressure over the incident. It announced it would be tightening import controls over Georgia’s alcohol products – Russia is the biggest importer of Georgian wine – and President Vladimir Putin declared that flights to Georgia would be banned as of July 8.

Nearly 20,000 people have signed a petition against this. Although it was a georgian who started the petition, most of the signatories are Russian.

“I am on vacation in Georgia, and found that the flights have been banned, but I hope it’s temporary and that flights will resume and we will all fly from Russian to Georgia and from Georgia to Russia,” said Ana Varankova, a tourist from Moscow holidaying with her family in Tbilisi. “Georgia is very friendly, I found this news from friends and not media. It is very sad, because why ordinary people should suffer, we have to interact with each other without fear.”

Meanwhile, the protests continue, with ongoing demands for the resignation of figures including interior minister Giorgi Gakharia and prime minister Mamuka Bakhtadze for allowing Gavrilov to visit. Parliament speaker Irakli Kobakhidze has already acceded to the protestors’ demands and resigned.

Nodia emphasised that the anger with the ruling elite would not be easily assuaged.

“The Georgian Dream government, informally led by secretive billionaire Bidzina Ivanishvili, is largely seen as ineffective, corrupt and increasingly autocratic,” he continued. “Widespread vote-buying and alleged voter intimidation during the last presidential elections caused anger and pessimism: will this government ever allow an opposition victory?”

Giving Voice, Driving Change - from the Borderland to the Steppes
Georgia
Protests
Connect with us