Campaigners say the authorities are destroying parks under pressure from developers.

Campaigners say the authorities are destroying parks under pressure from developers. 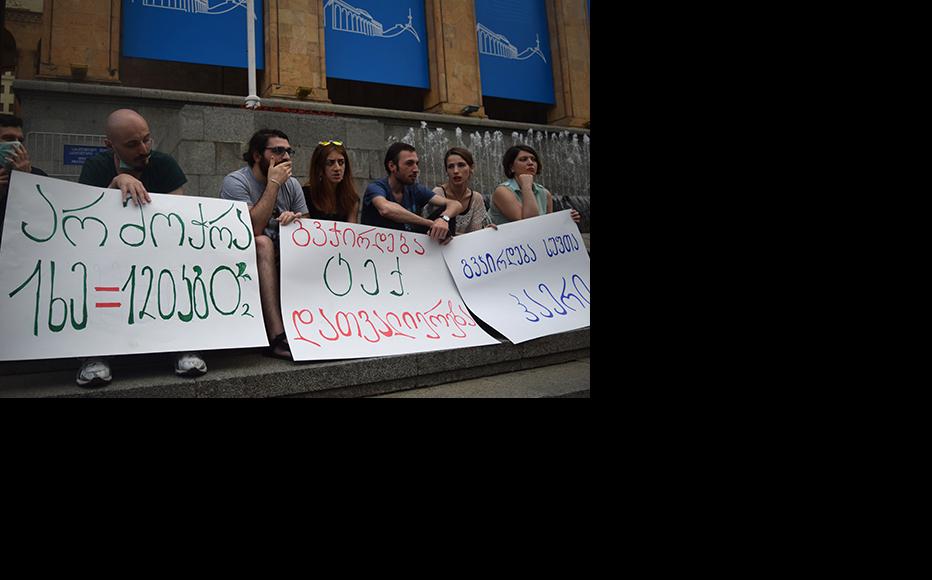 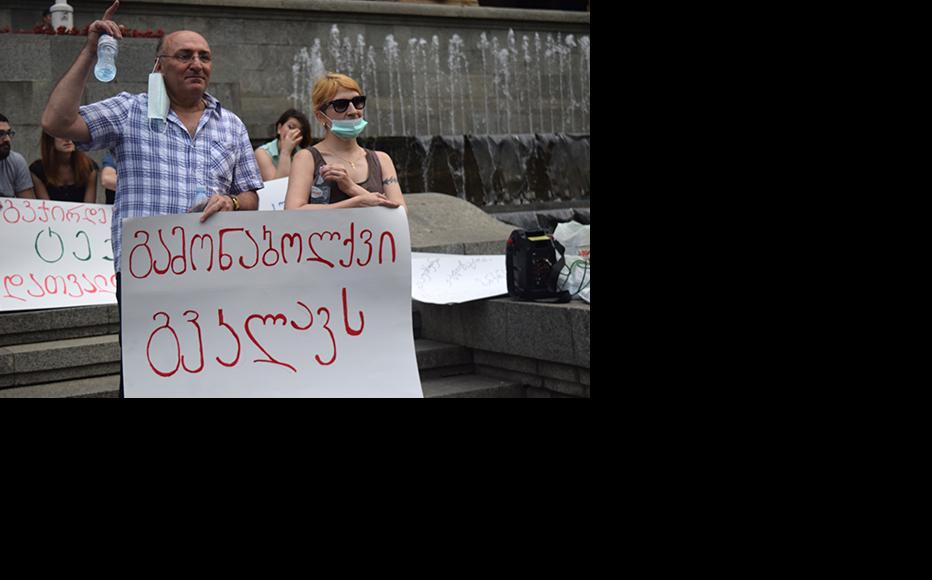 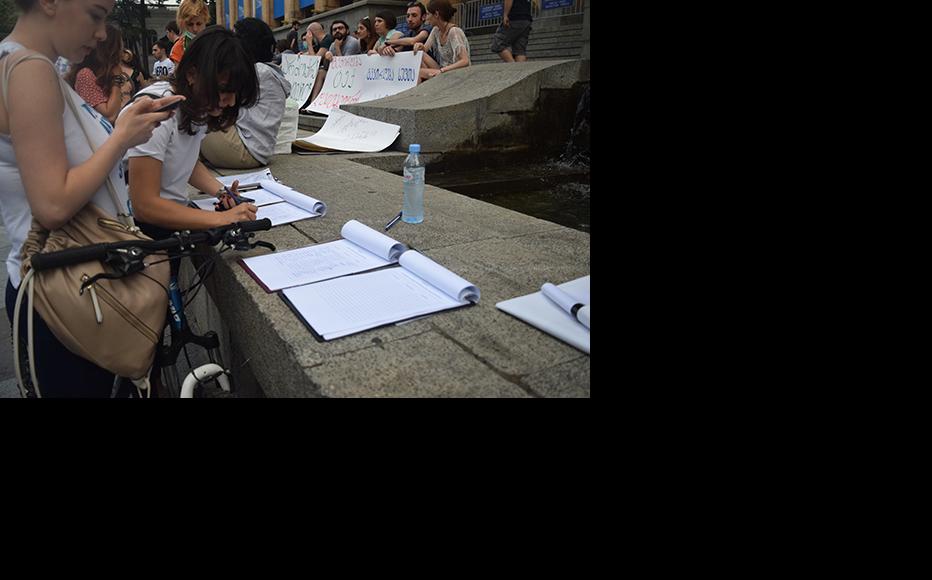 (Photo: Tamta Tvalavadze)
The link has been copied

Environmental activists have launched a tent protest in Tbilisi to highlight threats to the capital’s green spaces.

Campaigners warn that recreational zones in Georgia´s once leafy capital are shrinking as the planning authorities cater to the interests of property developers.

Public anger over a creeping encroachment on public spaces has been a recurring theme in Tbilisi in recent years. Large parts of the capital’s green areas have been built on with little advance notice.

The latest protests began after around 40 trees on the central Kazbegi avenue were felled in preparation for the construction of two residential blocks.

Although only diseased trees were supposed to be cut down, images circulated in the media showed healthy trees being removed.

A group of environmentalists began a protest in front of city hall on August 17 and announced a simultaneous hunger strike.

They also called for the resignation of the head of city hall´s ecology and landscaping service department and her deputy.

Tbilisi´s general prosecutor´s office launched an investigation and instituted criminal proceedings under article 303 of the criminal code that renders the felling of trees and shrubs illegal.  The mayor´s office announced a ten-day moratorium on tree felling in the capital.

However, protestors said more had to be done to address deteriorating ecological conditions.

Nata Peradze, one of the leaders of the Guerrilla Gardening Tbilisi movement, was hospitalised on August 23 after seven days on hunger strike.  Her fellow activist Elene Malahsevski-Jakeli took on the hunger strike in her place, although she has since also stopped for health reasons.

According to Guerrilla Gardening, the hunger strike will be replaced by a tent protest.

"We have to save and defend the whole environment by ourselves," they said in a statement. "It is our main duty and responsibility toward our children. It is a matter of our health."

According to a recent report by the International Energy Agency, in 2012 Georgia had the world´s highest mortality rate attributed to air pollution. Taking into account the size of the country´s population, there were nearly 300 deaths per 100,000 people.

Bulgaria came in second with around 240 deaths and China third with about 225 deaths per 100,000 people.

Georgia´s ministry of environment criticised the report´s findings and methodology.

“It should be noted that it is not international practice to use methodologies that are clearly linked with mortality due to air quality separately from other factors (for example, indoor air quality, the number of smokers),” the ministry said in a statement in late June.

“Give us a chance to breathe air, not poison,” was their campaign slogan.

Campaigners argue that the capital’s situation is down to traffic congestion, the lack of mandatory technical inspections of vehicles and widespread construction that has reduced green space.

Nino Gujaraidze, executive director of Green Alternative, told IWPR that “the authorities do not perceive the plight as a problem, and we want to make sure that they change this view”.

World Health Organisation guidelines suggest that cities should have a minimum of nine square metres of green space per person.   In Tbilisi, there are only between two to five square metres, according to various sources.

When Narnamia ran for mayor in 2014, he pledged to plant a million trees to bolster the city´s green space.

After winning the election in June that year, he launched a programme that saw half a million saplings planted by the end of 2015.

However, many of them have since withered, which environmentalists have said was a lack of care and being planted too close together.

In June 2009, the city council, known as the Sakrebulo, approved a plan that divided Tbilisi into two types of recreational and landscape zones.  In zone one, construction work of all kinds was prohibited.  In zone two, companies or private individuals can build, if they receive a special permit.

A company or private individual wanting to build in zone one could petition the architecture service of Tbilisi´s city hall.  A final decision on whether to change the status from zone one to zone two is made at a meeting of the Sakrebulo.

Since then, the authorities have changed the status of up to 40 recreational areas to areas of construction or business zones, according to Anna Gabriadze, chairwoman of the Safe Space NGO.

(See Green Spaces Shrink in Georgian Capital and Georgian Eco-Warriors in Battle to Save Tbilisi Park).

IWPR wrote to the Tbilisi architecture to ask how many requests to change status from zone one to zone two they have received over the last two years and how many have been approved.

In response, the service said that based on “the parameters of the question, it is not possible to find information”.

Safe Environment studied Tbilisi´s parks in 2012 and found that none of them had defined borders or management structures, which simplified the process of changing the status, according to Gabriadze.

Digomi Park, once the largest green zone in the capital, is a notable example of what happens when a recreational zone loses its status.  In spite of lawsuits and protests by environmentalists, building work went ahead on park terrain.

Tbilisi botanical garden was granted national monument status in 2007, which under the law on cultural heritage awarded it special protection.

Nonetheless in April this year, part of the garden’s zone status was changed.

Its administration quietly transferred about four hectares to Finservice-XXI, a company associated with former prime minister Bidzina Ivanishvili. This territory was exchanged for land the company owned on nearby Tabori mountain.

The public was not informed about the negotiations between the garden and the company.

According to the mayor´s office and the ministry of culture, “the status of the land has changed hands several times and there is nothing illegal about it”.

She said that government officials fear losing investors and so arbitrarily decided to change the status of the zone.

“The private investor dictates the policy of Tbilisi´s city hall, and not vice versa, citing economic benefits,” she said. “The mayor´s office and Sakrebulo reduce the recreational zones and do not explain the benefits of these zones to the public.”

Tamta Tvalavadze works for the Georgian Institute of Public Affairs.