Congolese journalists speak of love, work and relationships as one of their colleagues prepares to tie the knot.

Congolese journalists speak of love, work and relationships as one of their colleagues prepares to tie the knot. 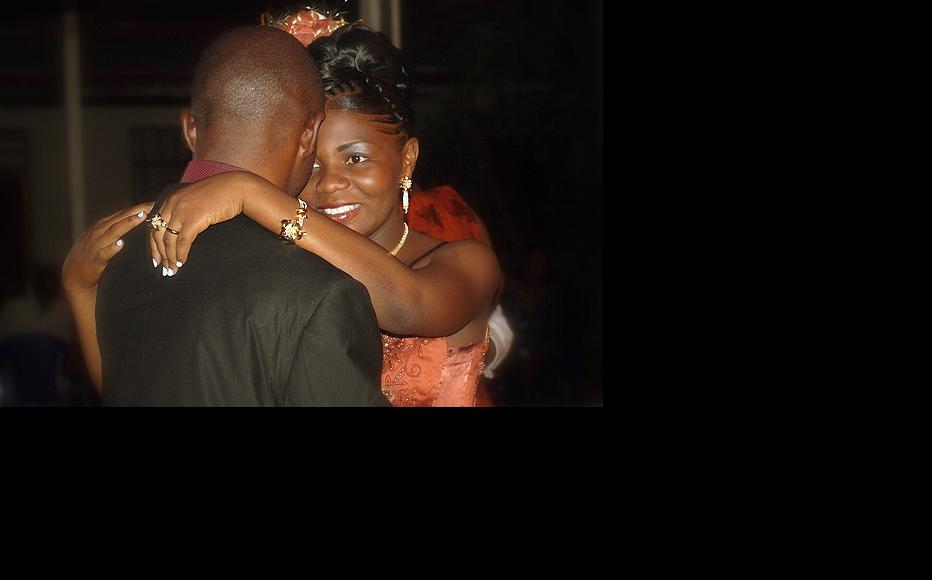 Constance and Johnny dancing on their wedding day,
The link has been copied

As a rainstorm rages outside, the small living room in Constance's parent's house is overcrowded with family relatives and friends who have come to say goodbye to her. Constance is not going far, just a few kilometres away to her husband-to-be's house in another neighbourhood of Goma. She is getting married tomorrow to her longstanding fiancé, Johnny.

Dressed in brightly coloured pagnes, the women want to admire Constance's dowry, paid by the groom a few weeks earlier. Among the items are two dresses for the ceremony, one white for the day, one deep red for the evening. Cries of joy and congratulation spread across the room.

It's getting late and most of the guests are preparing to leave, but Constance asks us to stay for dinner, a huge dish of fries and chicken shared around a small coffee table. I am sitting on a sofa with several other journalists from IWPR's Face à la Justice programme, a team that has become much more than just colleagues working together and more like a sisterhood of female journalists supporting each other in a male-dominated profession. But tonight, all of us are simply women talking about love and relationships and keeping Constance company, to soothe her nerves.

Marie and Régine, the oldest of our group, want to give Constance advice, while Passy, Lucie and I - the youngest - listen, a little fascinated, a little revolted. Talk about submission and a wife's duties spark a heated debate between the older and younger generation and, for me, open a window on the realities of daily life for women here in the Democratic Republic of Congo, DRC.

"Ever since we are children, we are told 'be submissive, be submissive'," said Marie, as she makes the gesture of nursing a child against her breast. I protest; it angers me, their resignation. But they laugh at what they see as my naïve idealism.

All the Congolese female journalists I work with are strong characters who do not let themselves be pushed around. Nevertheless, Marie was beaten up for years by her husband before she filed for divorce and raised her family alone. Esperance, 28, is in a happy marriage but says that she and her husband keep the details of their relationship secret from her in-laws. Often, it is he who takes care of their child while she gets up early for the morning news bulletin. If her mother-in-law knew about it, she would be shamed and scolded.

Esperance's marriage may be a model of modernity but the young women know she is among only an educated few who have this chance. For someone like Passy, 26, marriage is a scary prospect which she dismisses with a nervous laugh.

"I love working as a reporter, I love going out. Where will my freedom go when I get married? No one can be sure. Marriage give all powers to men," she told me later.

Constance's wedding date, December 3, has a particular resonance for Régine. Fourteen years ago, on that exact same date, she too was getting married. Initially, her wedding was to be held a month earlier, November 1, 1996. But a rebel attack on Goma changed her plans; the first Congolese war was breaking out.

"I was in the beauty salon having my hair done," she recalled. "I hid for several hours with the hairdressers and two friends. My father told me later he thought I was dead. When I came back to my parents' home, it was to find half of my family killed."

As she spoke, she had that particular half-convincing smile Congolese people always have when telling old stories of pain and loss. She and her husband decided to wed nonetheless a month later, for better or worse.

Though Constance is starting married life at a time when North Kivu is relatively stable and life in Goma arguably better than it has been for the past 15 years, she knows the way ahead will not be easy. For women of the eastern DRC, the path to equality with men is long, and uncertain and sexual violence is a constant threat hovering above their heads.

"Sometimes, I am discouraged," Passy said. "The way women have to bow in front of men disgusts me. But what is the way forward? Where do we go from here?"

The following day, Constance's wedding party is typical of such events in North Kivu. To celebrate the union, the couple are sat on a stage facing the guests and taken through a number of rituals by their wedding godfather and godmother.

A journalist from the local radio station where Constance works is the master of ceremonies for the event, providing an enthusiastic running commentary through a microphone on how beautiful Constance looks, how much in love the couple are and making jokes about their shyness.

At some point, he quotes the Bible on how a wife must be submissive towards her husband. My colleagues turn around at once, laughing and telling me, "Did you hear that!" I shrug and laugh with them, then we do a little dance before handing Constance the present we bought her. In her burgundy dress, a matching fabric flower in her hair, she truly looks pretty.

Melanie Gouby is an IWPR journalist.

Democratic Republic of Congo
Protests
Connect with us