Like the new president, Irakli Garibashvili is an ally of Bidzina Ivanishvili, who is stepping down as prime minister.

Like the new president, Irakli Garibashvili is an ally of Bidzina Ivanishvili, who is stepping down as prime minister. 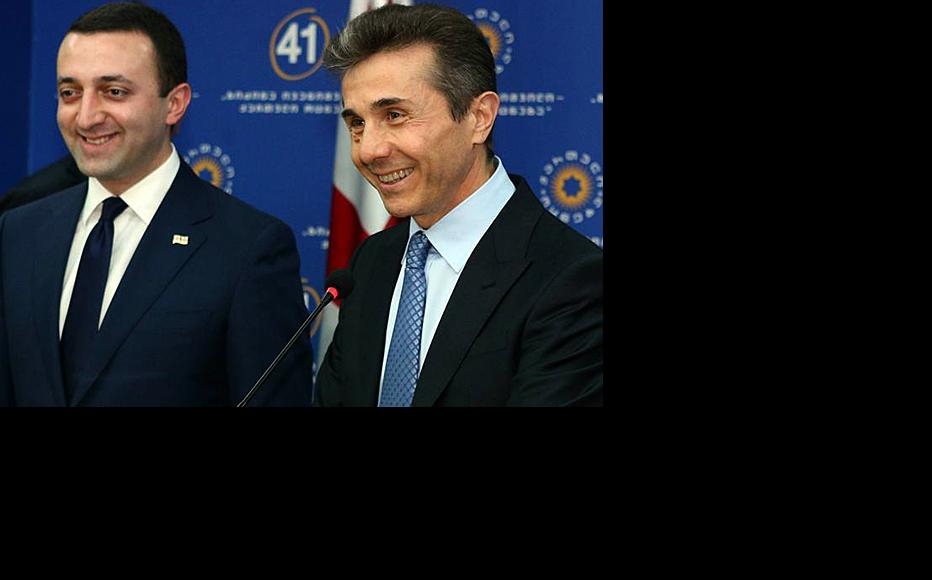 Georgian prime minister Bidzina Ivanishvili at a November 2 press conference at which he nominated Irakli Garibashvili (left) to succeed him. (Photo: Georgian Dream website)
The link has been copied

Georgians will soon have a new premier as well as their recently-elected president, as the current prime minister Bidzina Ivanishvili fulfils his pledge to leave political life.

Ivanishvili is handing over to two protégés. Giorgi Margvelashvili, elected president on October 27, was nominated by Ivanishvili’s Georgian Dream coalition. The ballot was the first time post-Soviet Georgia replaced one head of state with another in an orderly democratic process.

Margvelashvili will be inaugurated as president on November 17, and Ivanishvili will step down as prime minister a week later.

“I have announced a [Georgian Dream] conference for November 24, at which I will resign,” Ivanishvili said at a press conference on October 28. “I am leaving the party and politics…. As long as I remain in politics, I can express my political views, but I will not keep giving opinions once I have gone.”

On November 2, Ivanishvili named his chosen successor for his own job as Irakli Garibashvili, aged just 31, who is currently serving as interior minister.

The moment Margvelashvili becomes head of state, constitutional amendments will kick in transferring many of the powers formerly held by Georgian presidents to parliament and the prime minister.

“I promise you… that I will do everything to pursue the course you have successfully started,” he said on November 2 as Ivanishvili nominated him for the post.

Before Garibashvili can get the prime minister’s job, the cabinet will have to resign so that a new one can be approved by parliament. With a Georgian Dream majority there, that should be a smooth process.

Both Garibashvili and the incoming president are recent arrivals to politics. Margvelashvili was previously education minister, but before that he was an academic. Garibashvili used to head Ivanishvili’s charitable foundation, Kartu.

The current prime minister says he will step away from politics altogether, but will continue monitoring the government from afar.

Many political analysts in Georgia believe Ivanishvili will find it hard to resist using his considerable influence.

“I can’t tell how far Ivanishvili intends to intervene in the political process, but he will be able to if he so desires. It’s a fact that he’s named his closest ally as his successor,” Gia Nodia, a former education minister and now director of the Caucasus Institute for Peace, Democracy and Development, told IWPR.

“He has the levers,” added Kakha Gogolashvili, an analyst at the Georgian Foundation for Strategic and International Studies. “Whether he’s going to use them is a hard question to answer, but past experience shows that it isn’t very likely that anyone would refuse to use such political leverage.

“When Georgia chose a new president, the majority of voters were choosing not Giorgi Margvelashvili but Ivanishvili. The new prime minister, too, is a close ally of his. Of course both of them could become independent political players, but it will be difficult for them to do that.”

The United National Movement (UNM), the party of outgoing president Mikheil Saakashvili, has been in opposition since it was ousted from government in the October 2012 parliamentary election, and it is clearly very unhappy with the latest developments, particularly the choice of Garibashvili as prime minister.

“Our expectation was that the candidate would be someone competent and experienced who would be able to tackle the key issues confronting the country – problems with the economy, with creating jobs, and with attracting investment,” UNM parliamentarian Zurab Japaridze told reporters. “But unfortunately we got a candidate whose only plus is his loyalty.”

“The national budget is short of a half of a billion dollars, thousands of jobs have been lost, and the crime rate is going up. And speaking of rising crime, I’m reminded of Interior Minister Garibashvili… this isn’t a man with the vision to deal with the economic situation the country is in,” he said. “Ivanishvili’s decision to leave politics is nothing more than an abnegation of his responsibilities.”

“It’s no secret that the Georgian Dream coalition was created and held together around the figure of Ivanishvili. It consists of many parties with differing ideologies, and I wouldn’t rule out the possibility of it falling apart,” he said. “A lot also depends on how the UNM behaves. It might start working with some of the groups peeling away from the coalition.”

Gogolashvili said the low turnout of 47 per cent for the recent presidential election indicated that Georgian Dream’s popularity had waned over the last year.

“By the time the next parliamentary election is held [in 2016], I think we will be in a different situation,” he said.

Tinatin Jvania is a freelance reporter in Georgia.