Damning resolution still falls short of call for sanctions, as politicians weigh dangers for Georgia itself.

Damning resolution still falls short of call for sanctions, as politicians weigh dangers for Georgia itself. 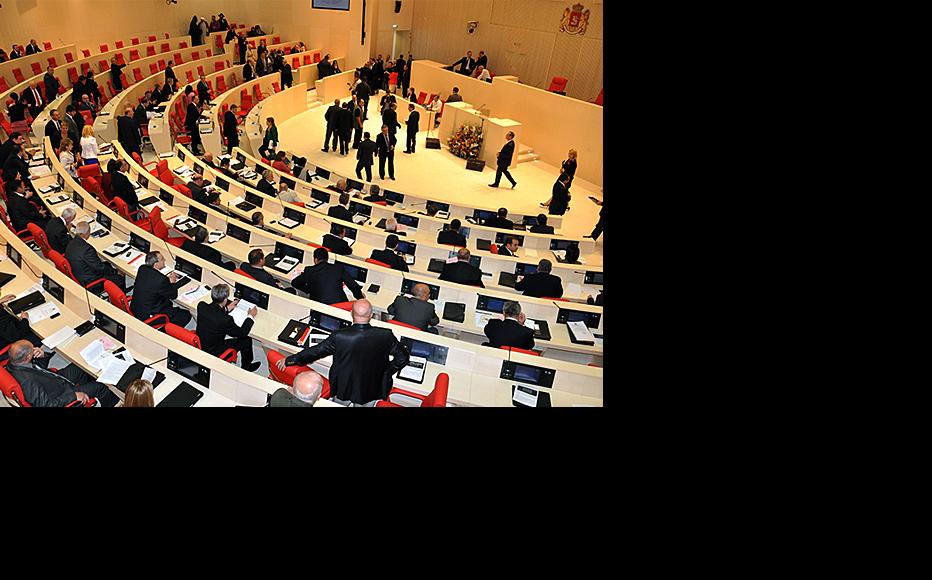 Georgian parliament in session. (Photo: Akhali Gazeti)
The link has been copied

Georgian politicians may be divided on how strongly they should react to Russia’s actions in Ukraine, but the resolution issued by the country’s parliament this week was still a stinging condemnation of the Kremlin, despite not calling for sanctions as some wanted.

Georgians view the arrival of Russian troops in Crimea through the prism of the 2008 invasion of their own country, and Moscow’s subsequent recognition of South Ossetia and Abkhazia as independent states.

“Georgia has already suffered military aggression from the Russian Federation and actions that ended with the occupation of two regions of our country and ethnic cleansing of them. Today Ukraine is threatened with the same thing,” a resolution passed in parliament on March 6 said.

The resolution was backed by the ruling Georgian Dream faction, but the United National Movement (UNM) minority refused to support it, saying it contained insufficient condemnation of Moscow’s actions.

At the time of the August 2008 war with Russia, the UNM was in power under the then president Mikheil Saakashvili,

The UNM produced its own draft that included a call for Western countries to impose “effective economic, political and diplomatic sanctions” designed to isolate Russia until it “ends its military and political aggression against Ukraine”.

The draft document also asked the European Union and NATO to make it easier for Ukraine, Georgia and Moldova to join NATO, and urged the Tbilisi government to do everything it could to secure entry when the alliance holds a summit later this year.

Georgian Dream refused to allow the word “sanctions” to be used in the final text, so the UNM refused to vote for it.

A political divide has existed ever since the Ukrainian uprising against President Viktor Yanukovich began last year. The UNM vocally supported the protesters, while the governing coalition remained more cautious.

Ex-president Saakashvili went to Kiev to support the revolution on the Maidan, the central square where protesters gathered.

“The heart of Europe is not in Brussels or in Berlin. The head of Europe is beating in Kiev. Its destiny will be decided in Ukraine,” Saakashvili told the protesters. “You amazed the whole world on the Maidan, and now you need to amaze it again. Amaze us again! Build a free and successful Ukraine.”

Georgian prime minister Irakli Garibashvili then gave a television interview in which he advised Ukrainians not to listen to Saakashvili.

“Saakashvili is the man who was unable to avoid war in 2008,” Garibashvili said. “I am just being friendly, and advising these people to listen less to the advice of Mikheil Saakashvili, since it’s hard for me to believe that he’s giving them good advice. This individual wasn’t able to do anything good for his own people.”

Analysts say the government is exercising caution in order to avoid any risk of Georgia being sucked into the problems now facing by Ukraine – something that many fear is inevitable.

According to Alexander Rondeli, head of the Georgian Foundation for Strategic and International Studies, “The situation in Ukraine presents a clear threat to Georgia, since if Russia gets away with what it’s doing, it will increase its pressure on Georgia and do everything it can to force us to turn away from our path of European integration, and maybe even make us into part of a confederation. If it doesn’t get away with it, there’ll be pressure anyway, of course, but not as strong.”

“The government is being cautious, since it doesn’t want to provoke any anger,” Rondeli told IWPR. “It has diplomatic problems, and so I suspected this would happen. But I did expect more support for Ukraine from the Georgian people. Sadly, a large part of our population does not understand that a free and democratic Ukraine is a shield for Georgia. If it falls, Georgia will find itself in peril.”

Rondeli said he could not rule some kind of Russian military action designed to provoke trouble.

On March 6, the foreign ministry in Tbilisi reported that a Russian military helicopter had overflown Georgian territory close to South Ossetia.

“At 6:22 pm the same day, a Russian unmanned aerial vehicle intruded from occupied Abkhazia… into airspace controlled by the Georgian central authorities, and flew over Georgian posts in the village of Khurcha,” a statement from the ministry said.

Tinatin Jvania is a freelance reporter in Georgia.

Ukraine, Georgia
Conflict
Connect with us