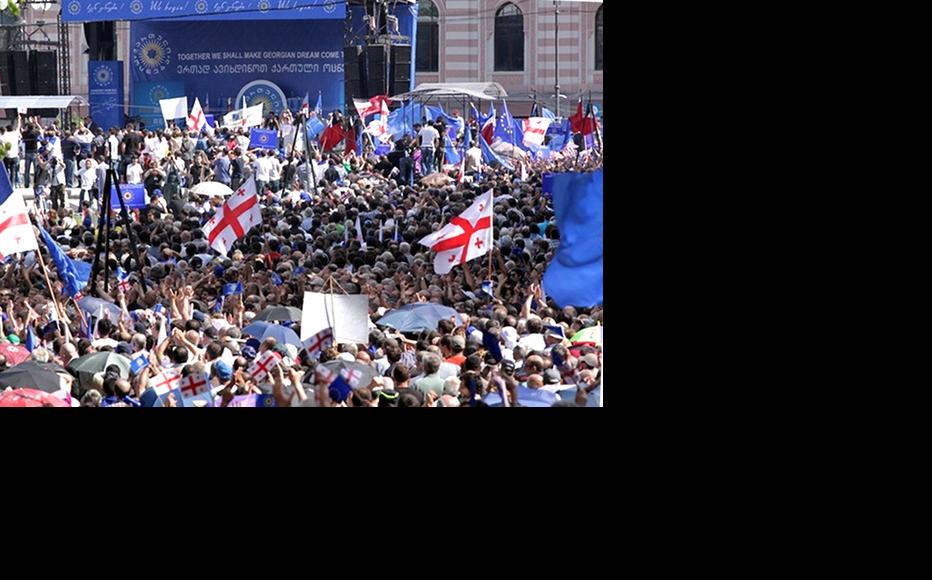 Georgian Dream rally in Tbilisi, May 27, 2012. (Photo: Mirian Koridze)
The link has been copied

Georgian opposition politician Bidzina Ivanishvili attracted tens of thousands of people to a rally supporting his Georgian Dream coalition on May 27, suggesting it may have a serious chance of doing well in the October parliamentary election.

The election is seen as particularly important as it comes months before the end of President Mikhael Saakashvili’s second and last term in office in January 2013, and could thus influence who replaces him.

Ivanishvili, a billionaire tycoon, entered politics in autumn 2011 and has injected a new dynamism into the Georgian opposition.

Seven months ago, even photographs of him were unobtainable.

Georgians swapped tales of his charitable donations to people living near his home village of Chorvila, located in the west of the country.

An estimated 80,000 to 100,000 people attended the rally in Tbilisi’s central Freedom Square and in surrounding streets.

“I came here because Saakashvili is driving the country into the abyss. God has sent us a saviour in the person of Mr Bidzina. These elections will be decisive,” said David Shalamberidze, a 56-year-unemployed man.

Unlike many opposition gatherings in the country, which tend to last for hours and include demands for Saakashvili’s resignation, this even lasted an hour and featured comparatively mild political rhetoric.

“It was the start of the election campaign, not a protest action. This has never happened in Georgia before,” said Tinatin Khidasheli of the opposition Republican Party, part of the Georgian Dream bloc. “Tbilisi residents were active on an unprecedented scale. I’ve never seen so many people together.”

Ivanishvili was the only leading politician to speak at the rally. He sat together with his wife while their son Bera, a rapper, performed several protest tracks.

Ivanishvili told his supporters that the government could not stop their march to power.

“The parliamentary election is vitally important to our country,” he said.

Ivanishvili, whose net worth was estimated by Forbes at 6.4 billion US dollars as of March 2012, came into conflict with the authorities in October 2011 when he announced plans to unseat Saakashvili’s administration in parliamentary elections. Almost immediately, Ivanishvili was stripped of Georgian citizenship, on the grounds that he also held a French passport, in what some saw as a bid to keep him out of political life.

Constitutional changes adopted in May 2012, however, opened the door for certain non-citizens to engage in politics, which would allow Ivanishvili to stand in elections.

Georgian Dream now plans to hold a similar rally on June 7 in Kutaisi, the second-largest city.

Despite the numbers at the Tbilisi rally, supporters of the ruling United National Movement said they did not view these gatherings as cause for concern.

“Georgia is a democratic country, where meetings and protest actions are part of political life. This action by Georgian Dream is no exception,” said Petre Tsiskarishvili, leader of the government’s allies in parliament.

Political commentators, however, said the sheer size of the rally reflected a surge in Ivanishvili’s popularity, and made a change of government conceivable.

“Ivanishvili became a different person after May 27. The level of his legitimisation as an opposition figure in the country has risen,” Ia Antadze, a journalist and political commentator, said.

Ramaz Sakvarelidze, a professor at Tbilisi State University and a political analyst, said the size of the protest should serve as a warning to Saakashvili.

“The government must realise how many people will come out if they are unhappy with the results of the election, and how much the Georgian public, in Tbilisi in particular, supports Ivanishvili,” he said.

“You can’t say that everyone who came is a supporter of Georgian Dream. They included many who were there just out of interest. As for its political team, it doesn’t carry any particular political weight or ideas,” Chkoidze said. “Unlike other opposition parties, they have a lot of money and their attractiveness derives from that money.”

The rally also appeared to lack focus, he added.

“There was no particular political message at this demonstration, just as there were few politicians there. It was mainly poets, writers of the older generation, and actors, which shows this movement isn’t wholly political; it’s a force based on the wealth of one man who acts as coordinator.”

Gia Nodia, a former education minister, said the orderly nature of the rally suggested a maturing of Georgia’s public politics. Previously, he said, such an event would have been part of a campaign to seize power, and would have included calls for the government to stand down immediately.

“This has suggested to opposition supporters that you can change the government via elections,” he said. “Ivanishvili has managed to unite the opposition-inclined elements of society and it is very positive that these people did not demand the immediate resignation of the government but just started a political campaign,” he said.