Hundreds of buildings are in dire need of restoration, but arguments continue over who has the authority to carry out works.

Hundreds of buildings are in dire need of restoration, but arguments continue over who has the authority to carry out works. 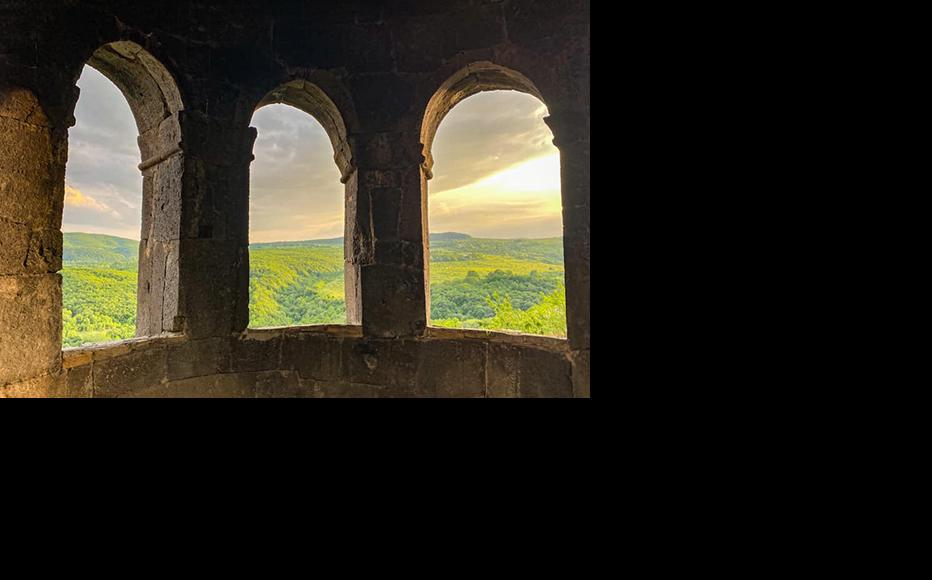 A view from Tiri Monastery. A view of the main building of Tiri Monastery. 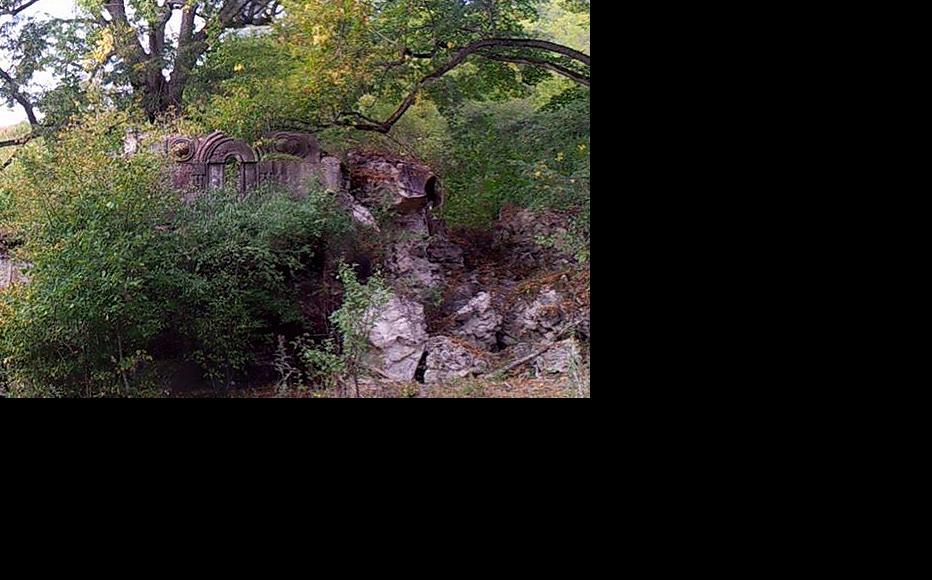 The Sabatsminda Monastery covered almost entirely by trees and bushes that have overgrown.
The link has been copied

Lela Mazmishvili, 27, spent her childhood in the village of Achabeti in the Greater Liakhvi gorge, in a house with views over a historic landscape featuring an ancient monastery and a 16th century fortress.

But displaced by the August 2008 war to the town of Gori, she has not seen her home since.  And she knows that over the years, much of the picturesque village has fallen into disrepair.

"The balcony and the windows of my house overlooked the Achabeti fortress,” recalled Mazmishvili, a historian by training who currently works for the Kartlosi – Bridge of Friendship NGO, which brings communities divided by conflict together.

“On September 21, on Saint Mary’s day, my family and many others from our village went to Tiri monastery. Many came from Tskhinvali too and we celebrated this day together. I was little then, but I remember the churches and historical buildings in my village.

“I asked my aunt and cousins, who still live in Tskhinvali, to send photos of the place where I grew up, including historical monuments. It was very emotional for me and my mother to see these pictures, because unfortunately, my home and other buildings have been damaged or destroyed.”

There are around 600 historic sites in the Tskhinvali region, now controlled by the de facto republic of South Ossetia. Around half of the structures are in dire need of restoration, but arguments continue over just who has the authority to carry out any works.

Badri Gasparov, a director of the Liakhvi Gorge State Museum Reserve, explained that the Georgia-Russia war had taken a heavy toll on monuments in the Greater and Little Liakhvi as well as Prone gorges.

“After the 2008 war, the 18th-19th-century Archangel church in Kheiti was damaged by shelling, with the dome and steeple being damaged,” he said. “The St George church in Eredvi was also damaged by shelling. There was another small wooden church in Sveri, dating back to the late 19th century, which was burned down, presumably due to shelling. The house-museum of Ivane Machabeli in Tamarasheni was demolished by explosives in the 90s, it was later restored, but was soon razed to the ground. All these monuments were damaged during hostilities.”

He added that even since 2013, entire historical villages in Shida Kartli had been badly damaged.

"If you look at the area on Google map, you can't assume that once there were villages and people who lived there,” he continued. “The whole area of Greater Liakhvi Gorge is a big valley now. As for Ikorta church, it was located in Little Liakhvi gorge and the restoration works were being carried out here until 2008. Later, the forces who took control over the territory, were going to proceed with restoration but nothing has been repaired. There were some works carried out at the Tiri monastery, the roof was fixed and the outside perimeter cleaned. But currently all works are suspended,” Gasparov said.

Another concern is that professional restoration is a multi-stage process that must begin with research conducted by archeologists, geologists, architects and other experts. Then the project should be approved by the patriarchate and the ministry of monument protection, at which point specialists decide who will carry out the work.

“What was done in Achabeti fortress is a clear example of superficial and unprofessional work,” said art historian Paata Basishvili. “They have covered the façade with cement and it looks like a restaurant now. The historical monuments are under threat of destruction and we have no access there. We know that there are Russian military bases nearby and who knows what might happen to these monuments with all that heavy equipment and military exercises.

“Tskhinvali is seeking help from Russian specialists, but they will do the same here as they did in Abkhazia. If anyone wants to save these monuments, they can only do one thing – not let anyone perform any work there. These monuments cannot be restored without our specialists; it will be an international crime.”

The Georgian authorities say that they have consistently raised this issue in forums including the Incident Prevention and Response Mechanism and Geneva International Discussion meetings. Shota Utiashvili, the former head of the analytical department at the ministry of internal affairs said that these efforts had always been rejected.

“We repeatedly asked both Tskhinvali and Abkhazia to let UNESCO experts on the sites to inspect them and make sure that they were in good condition,” he said. “I remember that at that time we debated over Ilori church, the walls of which were whitewashed by Russians and the original dome changed into the Russian-style one. They always responded, ’this is our business and you have nothing to do with it. These are our monuments and no destruction threatens them.’”

The issue has also often been raised at the international meetings organised by the International Center on Conflict and Negotiation Research.

Tinatin Asatiani, a spokesperson for its Caucasus office, said religion could play an important role in Georgian-Ossetian relationship, but could also create complex problems.

“When I communicated with people from Tskhinvali, they disassociated themselves from the Georgian church,” he said. ‘The main question is, who lives on the Ossetian side and do they care about these monuments? Religion and faith are very sensitive topics, and if you are not trusted, it means that you are not sincere enough; you can be manipulated. We have to do more research, make a diagnosis first and then talk about ways to solve the problem.”

Zurab Bendianashvili, a head of the Coalition for IDP Rights, said that the matter had been complicated by communication difficulties and the fact that international organisations had no access to the sites.

“As far as I know, talks with Tskhinvali were about restoring four monuments, including Tiri monastery and Ikorta in Achabeti, as well as other big churches, which were supposed to become major South Ossetian tourist attractions,” he said. “The restoration of these sites is more a matter of foreign policy rather than a protection of cultural heritage. About five years ago, a Russian company started rehabilitation works in the churches of Tiri and Ikorta, causing considerable damage to both buildings, including the frescoes. The lack of professionalism was so obvious that Tskhinvali authorities suspended the work.”

Mazmishvili remembers the 12th century Ikorta church well, is 35 km from Tskhinvali. During the feudal era, it was one of the residences of Ksani Eristavs, the region governors of the. Prominent Georgians Bidzina Cholokashvili, Shalva and Elizbar Ksani Eristavs – who led the uprising against Kizilbashes in 1659 - are buried there.

"By keeping touch with friends living in Tskhinvali on social media, I can see what’s happening to these historic sites,” Mazmishvili said, adding that she longed to visit them once again.

“One of them recently posted photos of my beloved Tiri monastery, which I miss a lot. As I know, a few years ago restoration works were carried out there. I also know that the monastery of Sabatsminda and Ikorta are in a devastating condition and no reconstruction works have been carried out there. It is my wish to see these places one day in the same state as they were when we left.”

Giving Voice, Driving Change - from the Borderland to the Steppes
Georgia, South Ossetia
Life
Connect with us